the origin of the term visual music

While doing research I was sidetracked into one of those detail questions that can take a while to resolve: when was the term ‘visual music’ actually used for the first time ?
The answer commonly found across the web is that the term was coined by painter and art critic Roger Fry in 1912 when he was discussing the work of Kandinsky. This would make a lot of sense, since Kandinsky wrote of his envy of music in ‘Über das Geistige in der Kunst’ (‘Concerning the Spiritual in Art’), for instance:

or the same passage in english:
‘A painter, who finds no satisfaction in mere representation, however artistic, in his longing to express his inner life, cannot but envy the ease with which music, the most non-material of the arts today, achieves this end. He naturally seeks to apply the methods of music to his own art. And from this results that modern desire for rhythm in painting, for mathematical, abstract construction, for repeated notes of colour, for setting colour in motion.’ 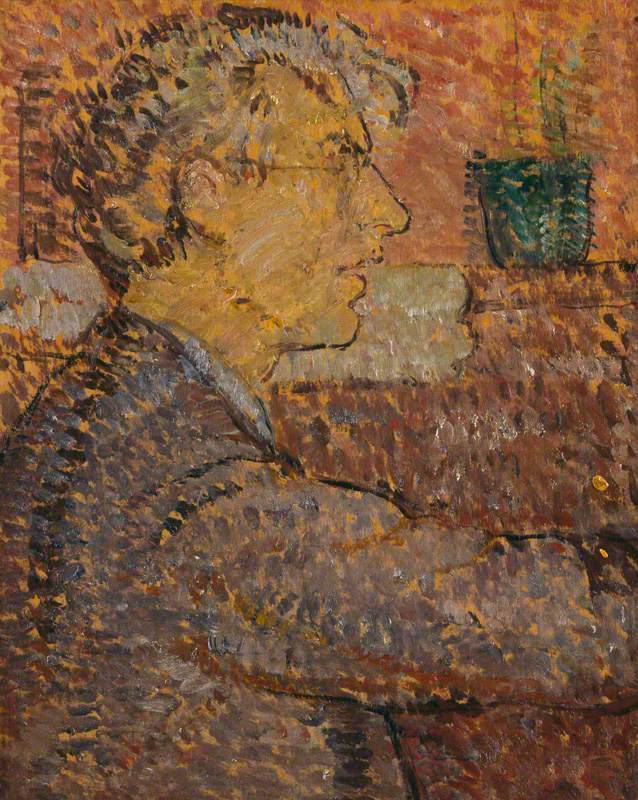 But there is no source mentioned for this and it turns out the truth is more messy. In 1912 Roger Fry used the term – presumably for the first time – in the preface of the catalogue of the second Post-Impressionist exhibition he had organized at the Grafton Galleries, an exhibition that included no Kandinsky, but many works by Picasso, Cézanne, Matisse and works by English painters as Duncan Grant, Vanessa Bell, Stanley Spencer, Wyndham Lewis and by such Russian artists as Natalya Goncharova and Mikhail Larionov. In fact, when he talks about ‘visual music’ he uses the ‘later work’ of Picasso as example. Here is the relevant passage:

“Another charge that is frequently made against these artists is that they allow what is merely capricious, or even what is extravagant and eccentric, in their work — that it is not serious, but an attempt to impose on the good-natured tolerance of the public. This charge of insincerity and extravagance is invariably made against any new manifestation of creative art. It does not of course follow that it is always wrong. The desire to impose by such means certainly occurs, and is sometimes temporarily successful. But the feeling on the part of the public may, and I think in this case does, arise from a simple misunderstanding of what these artists set out to do. The difficulty springs from a deep-rooted conviction, due to long-established custom, that the aim of painting is the descriptive imitation of natural forms. Now, these artists do not seek to give what can, after all, be but a pale reflex of actual appearance, but to arouse the conviction of a new and definite reality. They do not seek to imitate form, but to create form ; not to imitate life, but to find an equivalent for life. By that I mean that they wish to make images which by the clearness of their logical structure, and by their closely-knit unity of texture, shall appeal to our disinterested and contemplative imagination with something of the same vividness as the things of actual life appeal to our practical activities. In fact, they aim not at illusion but at reality.
The logical extreme of such a method would undoubtedly be the attempt to give up all resemblance to natural form, and to create a purely abstract language of form — a visual music ; and the later works of Picasso show this clearly enough. They may or may not be successful in their attempt.”

(from the preface to the catalogue of second Post-Impressionist Exhibition, Grafton Galleries, 1912, quoted from Roger Fry, “Vision and Design“, Chatto & Windus, London, 1920, p. 157) 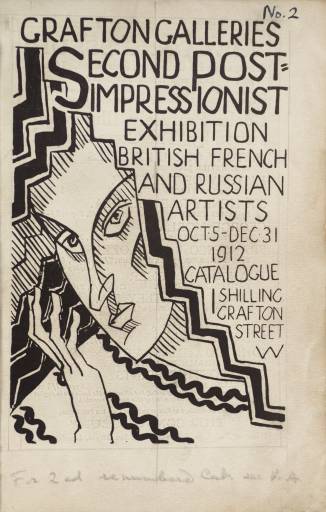 A bit less than a year later, in August 1913, he uses the term again when he discusses another exhibition, by the ‘Allied Artists’ at Albert Hall in London, where he sees again Picasso and now also Kandinsky taking abstraction the furthest:

“Undoubtedly representation, besides the evocative power which it has through association of ideas, has also a value in assisting us to co-ordinate forms, and, until Picasso and Kandinsky tried to do without it, this function at least was always regarded as a necessity. That is why, of the three pictures by Kandinsky, the landscape strikes one most at first. Even if one does not recognise it as a landscape, it is easier to find one’s way about in it, because the forms have the same sort of relations as the forms of nature, whereas in the two others there is no reminiscence of the general structure of the visible world. The landscape is easier, but that is all. As one contemplates the three, one finds that after a time the improvisations become more definite, more logical, and closely knit in structure, more surprisingly beautiful in their color oppositions, more exact in their equilibrium. They are pure visual music, but I cannot any longer doubt the possibility of emotional expression by such abstract visual signs.”

But even though the supposedly first use of the term ‘visual music’ is not linked to Kandinsky, it is ofcourse very well possible that Roger Fry was inspired by Kandinsky’s ideas when coining the term. ‘Über das Geistige in der Kunst’ was published in German in 1912, and was already discussed in the spring 1912 issue of the journal ‘Rhythm‘ by Michael Sadler, who published the first English translation of it in 1914.
And it should be remembered that this discussion is about details: before Roger Fry there were many artists working in or thinking of what is now referred to as ‘visual music’, but calling it ‘musique muette’ (already in 1725), ‘colour harmony’, ‘colour music’, ‘mobile colour’ or by other names. It seems to me that the term ‘visual music’ did not really get its current usage until the 1980’s, with the invaluable work of William Moritz. Its value as a term denoting the whole field perhaps derives from the fact that it is relatively neutral: I believe until the 1980’s, few people used it to talk about their own work, which means that it is not associated with the work of only one or a few artists, in contrast to terms as ‘lumia’ or ‘nourathar’. 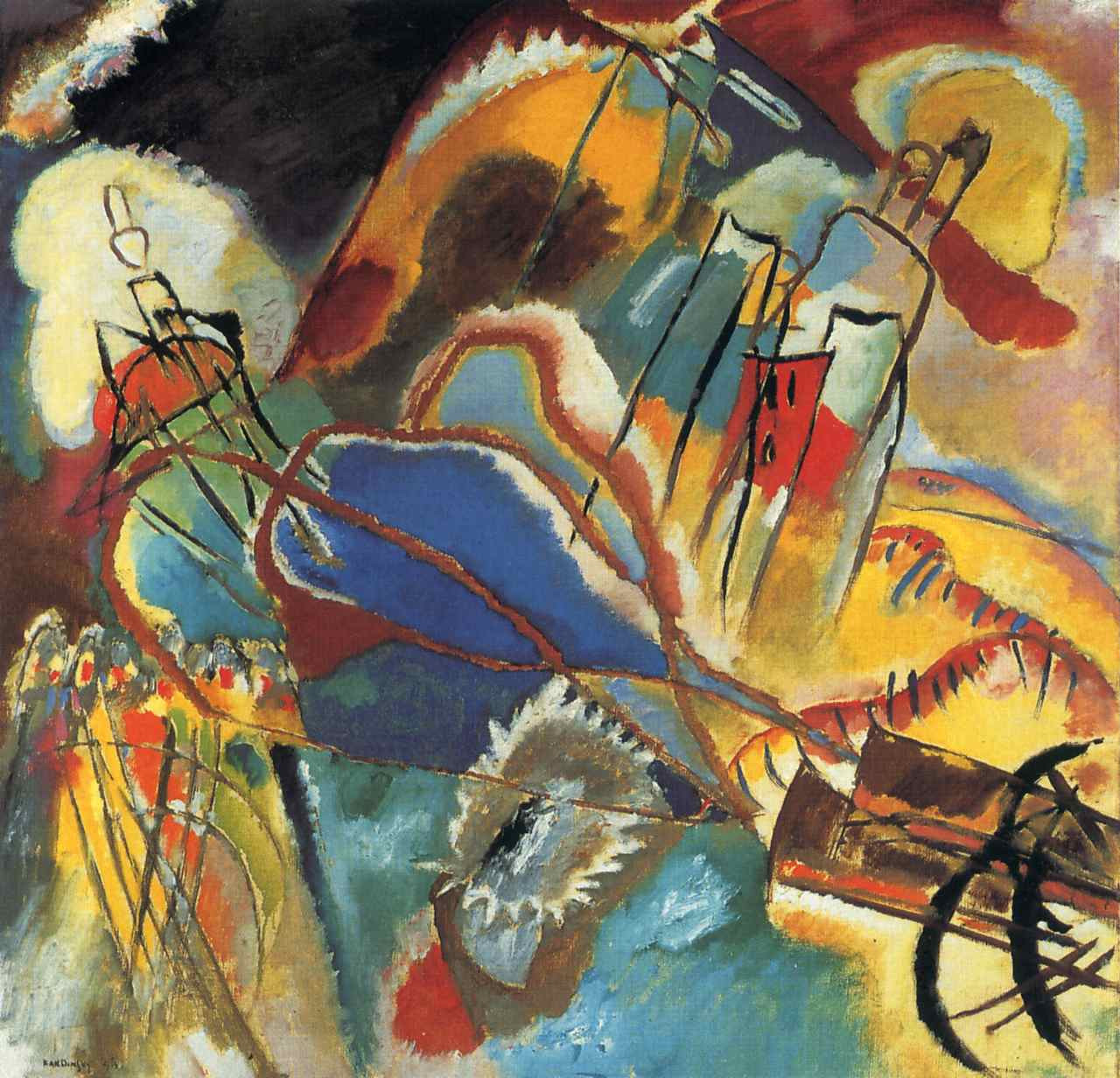