( A great, dreamy text to which I have seen quite a few references but which is pretty hard to find. As far as I know William Katavolos has never been a ‘standard’ architect and as far as I know this text is the only one he ever published on the subject. In his book ‘Nanoarchitecture’ John Johansen refers to him as a physicist and credits him as being the first to sow the notion of a ‘growing architecture’. In light of the current developments in nanotechnology, artificial life, modular robotics and interactive architecture, the dreamy ideas of Katavolos appear suddenly again very relevant.
This is the complete english text of the booklet published in 1961 by Steendrukkerij de Jong & Co., Hilversum. In this booklet the text also appeared in a dutch, french and german translation. I’ve also included all the figures, but not in their original size. ) 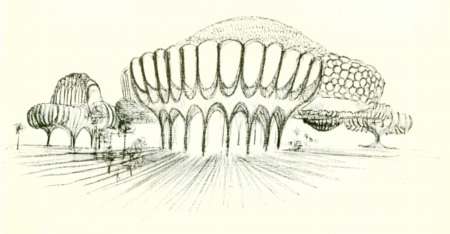 A new architecture is possible through the matrix of chemistry. Man must stop making and manipulating, and instead allow architecture to happen. There is a way beyond building just as the principles of waves, parabolas and plummet lines exist beyond the mediums in which they form. So must architecture free itself from traditional patterns and become organic.
New discoveries in chemistry have led to the production of powdered and liquid materials which when suitably treated with certain activating agents expand to great size and then catalize and become rigid. We are rapidly gaining the necessary knowledge of the molecular structure of these chemicals, together with the necessary techniques that will lead to the production of materials which will have a specific program of behavior built into them, while still in the submicroscopic stage. Accordingly it will be possible to take minute quantities of powder and make them expand into predetermined shapes such as spheres, tubes and toruses.

Visualize the new city grow molded on the sea, of great circles of oil substances producing patterns in which plastics pour to form a network of strips and discs that expand into toruses and spheres, and further perforate for many purposes. Double walls are windowed in new ways containing chemicals to heat, to cool and to clean, ceilings patterns created like crystals, floors formed like corals, surfaces structurally ornamented with visible stress patterns that leap weightlessly above us. The fixed floors provide the paraphernalia for living, a vast variety of disposable pods plugged into more permanent cellular grids. 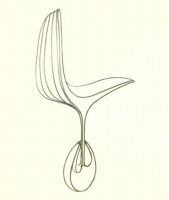 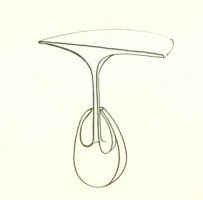 Let us discuss the principles of organics in how it might affect something as simple and as complicated as a chair. To be comfortable a chair must vibrate, must flex, must massage, must be high off the floor to allow for easy access or vacation. It should also be low to the floor, when sitting, to take pressure off those areas of the body which easily constrict. It must also be capable of educating its occupant, of having sounds come stereophonically to his ears, it must create correct ionic fields, it must have the ability to disappear when not in use, and above all it must be beautiful. A chair like this does not exist. My researches have led toward these needs again and again. We could create a mechanical contrivance which would do all of these things, but from my own experience with such machines in which to sit, they would not fully satisfy or delight the eye of the beholder. Now this becomes very possible using blow molded methods of plastics with a double wall, which could be filled with chemicals of various densities, which could allow the outside surface to be structurally ribbed in a beautiful pattern, which would allow the inner shell to flex and to receive the body, a chair which could easily again bring coolness or heat through chemical action, vibration and flex, a chair which could incorporate electronic devices for sounds, and also for creating correct ionic fields. A chair which would be an affirmation of all that has gone before and that which is now necessary. This we can do without mechanics, organically in much the same manner as similar actions such as respiration, peristalsis, pulse rhythms occur in many natural forms. 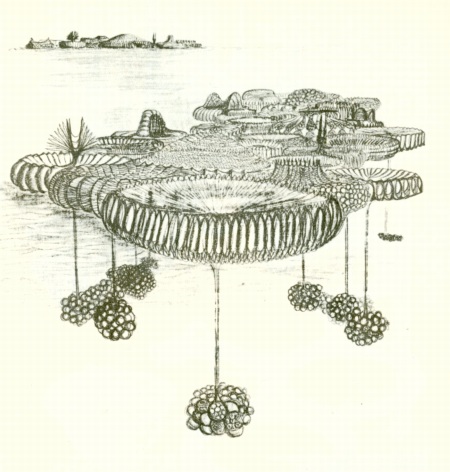 Carrying the principle further from furniture into the idea of containers for food, for liquids, we find that again the double wall structurally ribbed on the outside, smooth on the inside, could eliminate the need for refrigeration by chemically cooling the product within, or when activated or opened such a container might then chemically cook the soup, provide the disposable bowl itself from which to drink, and thereby make the stove, the sinks for cleaning and areas for storage unnecessary, as we know them. 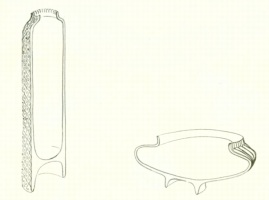 Again the organic process creates an immense simplification and allows a great freedom for the positioning of areas within the environment. As in the case of the bath and showers we find the double walled container, which would enclose the form to the neck and chemically steam the occupant, would clean the body and then dry it. 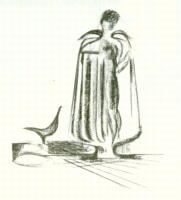 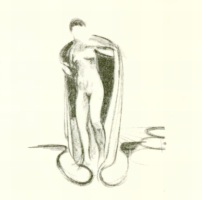 To carry the point further the individual could then create his own plastic fabrics by pouring them in pleasing patterns around the base of the pedestal, allowing it to catalize and harden into continuous containers to wear in new ways.

Let us discuss the chemically packaged lavatory which would rise to a comfortable height for the user then slowly lower to provide the particular position that we have found the best for total evacuation. Again the entire unit would rise through pressure and allow its occupant to comfortably withdraw from it, leaving the waste products to be chemically consumed and packaged, thus eliminating the needs for connective pipes. Having cut the umbilicus we find it possible to create the new house on any site in that it is chemically a complete organism in which to live, deriving strength from its surrounds. 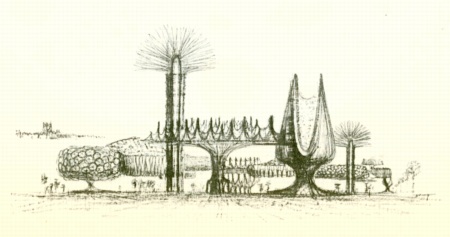 Houses such as this would grow to certain sizes, sub-divide or fuse for larger functions. Great vaults would be produced with parabolic jets that catalize on contact with the air. Exploding patterns of an instantaneous architecture of transformations, into desired densities, into known directions, for calculated durations. 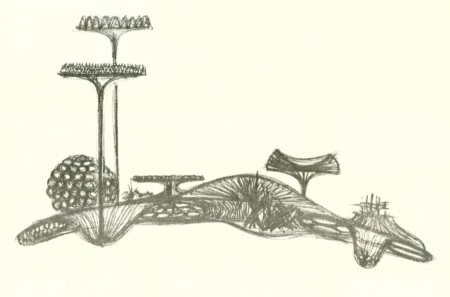 In the morning suburbs might come together to create cities, and at night move like music to other moorings for cultural needs or to produce the socio-political patterns that the new life demands.