(A paper read at St. James’s Hall on June 6, 1895, published in pamphlet form by Messrs. Spottiswoode & Co., New St. Square. June 13, 1895, reprinted in ‘Colour Music, the Art of Light’, by A.B.Klein, Lockwood, London, 1930, pp 256-261.
The two colour pictures I have added here are in fact from Rimington’s later book and do not originally belong to the pamphlet, the portrait is taken from elsewhere in A.B.Klein’s book)

LADIES AND GENTLEMEN,
Perhaps as the instrument I am about to show you, and the art which it has rendered possible, are so entirely new, you will allow me to say a few words in explanation.

Very briefly, my aim has been to deal with Colour in a new way, and to place its production under as easy and complete control as the production of sound in Music.
Until now colour to a large extent in nature, and altogether in art, has been presented to us without mobility and almost invariably associated with form. Colour combined with form has constituted the whole colour art of the world.
In painting colour has been used only as one of the elements in a picture, although perhaps the greatest source of beauty. We have not yet had pictures in which there is neither form nor subject, but only pure colour. Even the most advanced impressionism has not carried us thus far. In decorative art colour has, broadly speaking, held the same position.
Moreover, to obtain particular tints of colour it has been necessary to mix them laboriously on the palette or in the dye-house. Art hitherto has not been able to compete in any sort of way with Nature in the mobility of her multi- tudinous and ever-varying combinations of colour.
There has, in fact, been no pure colour art dealing with colour alone, and trusting solely to all the subtle and marvellous changes and combinations of which colour is capable as the means of its expression.
The object of the present invention is to lay the first stone towards the building up of such an art in the future.
The chief problem, then, that the new art sets itself is to introduce mobility into colour, and with this changefulness, the three great influences of Time, Rhythm, and Combination, slow or rapid and varied. Colour thus is freed from the trammels of form, and dealt with for the sake of its own loveliness.

To turn to the practical side of the matter, how has this been made possible ?
Many here present are men of great scientific eminence, and there are others again to whom the science of light and colour is familiar. To these I must apologize for touching upon a few simple facts, in order to make the matter clearer to those of my guests who do not possess this special knowledge.
Let me then begin by saying that to deal in this way with colour we must go to the source of all colour – namely, light. If we take a ray of white light, we have that which contains every colour in nature. Such a ray may be split up into all the colours which compose it, by being passed through a prism and spread out into what is known as the spectrum band ; which I propose to show you in a moment. Any tint or shade of colour may be obtained by re-combining in the required proportions the simple colours which you will see in this band.
Here is such a ray produced by the electric arc.
Pass it through a pair of prisms, and it is spread out into the spectrum band you see before you.
In the instrument I have invented, and which I propose to call the ‘Colour- Organ,’ I have taken a certain number of points, at carefully calculated intervals, along the whole length of this spectrum band, and have devised means for obtaining the colour at these points as accurately as possible, in much larger quantity, and in variable intensity. The colours thus selected have been placed under the control of a keyboard like that of a pianoforte.
I do not here propose to trouble you with a description of the rather delicate mechanism which intervenes between this keyboard and the diaphragms which filter out the colours required, and which has been a source of great difficulty in the construction of the instrument, but suffice it to say that, upon the depression of any note, the corresponding colour by these mechanical means is projected upon the great screen at the end of the hall. Thus each note of the keyboard has its own distinct and permanent colour corresponding to the proper interval on the spectrum band, just as each note of the pianoforte has its own distinct musical sound. The keyboard is, in fact, a large palette from which we can paint with instantaneous effect upon the screen – the colours being at will combined into one chord, or compound tint, upon its surface. 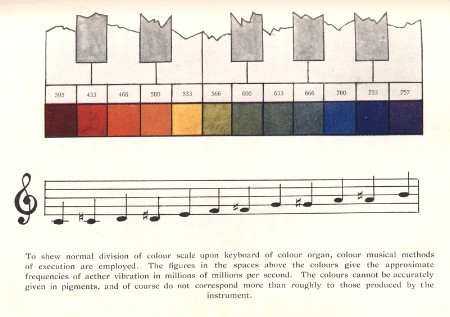 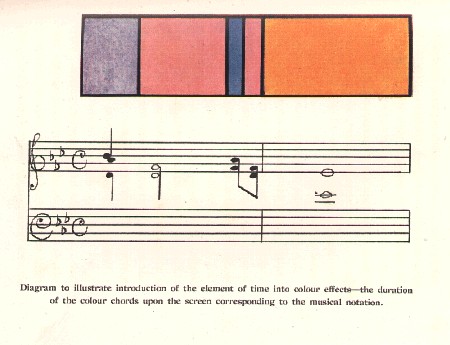