The Design of M. Speculatrix

(This text was written by W. Grey Walter and published as an appendix to his book “The Living Brain”, Duckworth, 1953.
It describes in some detail the construction of his Machina Speculatrix, a species of tortoise-like mobile autonomous robot Gray Walter designed as part of his research at the Burden Neurological Institute. He built two individuals around 1948, called Elmer and Elsie. For the ‘Festival of Britain’ in 1951 six more were built, of which two are still in existence. Recently one of these has been replicated twice by Owen Holland and Bunny Warren, the designer of the 1951 batch.
Only the ‘Fig. 19’ circuit diagram originally belongs to this text, the others come from various sources. Note the images of Elsie looking into the mirror ! ) 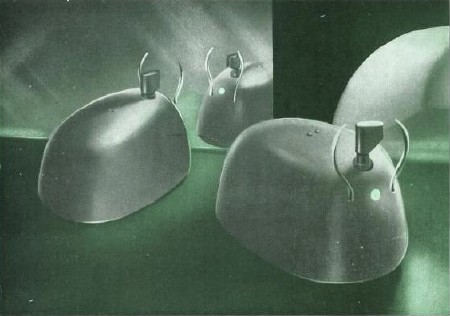 The original caption for picture above reads:
“Mechanical ‘animals’ can be made to steer themselves towards the light” 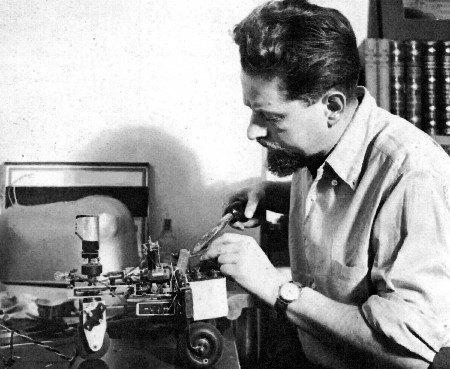 As already emphasized, the simpler a model is, the more helpful it is likely to be. This is a model of elementary reflex behaviour and contains only two functional elements: two receptors, two nerve cells, two effectors. The first receptor is a photo-electric cell, mounted on the spindle of the steering column so that it always faces in the same direction as the single front driving wheel, which is one effector. In the dark the steering is continuously rotated by the steering motor, the other effector, so that the photo-cell scans steadily. The scanning rotation is stopped when moderate light enters the photocell, but starts again at half speed when the light intensity is greater – the dazzle state. The driving motor operates at half speed when scanning in the dark, at full speed in moderate or intense light. The other receptor is a ring-and-stick limit switch attached to the shell, which is rubber-suspended. When the shell touches something or when a gradient is encountered, it is displaced and closes the limit switch. This connects the output of the ‘central nervous’ amplifier back to its input through a capacitor so that it is turned into a multivibrator. The oscillations produced by the multivibrator stop the circuit from acting as an amplifier so that simple sensitivity to light is lost; instead, the connexions alternate between the ‘dark’ and ‘dazzle’ states. The steering-scanning motor is alternately on full- and half-power and the driving motor at the same time of half- and full-power. The effect of this is to produce and turn-and-push manoeuvre. The time-constant of the feedback circuit is selected to give about one-third of the time on ‘steer-hard-push-gently’ and two-thirds ‘push-hard-steer-gently’. This seems to give a prompt response to the first contact with an obstacle, a reasonable chance of getting away, or getting through a gap – and a short after-discharge to ensure final escape. Though there is no direct attraction to light in the obstacle-avoiding state, the feedback time-constant is shorter when the photo-cell is illuminated, so that when an obstacle is met in the dark the avoidance drill is done in a leisurely fashion, but when there is an attractive light nearby the movements are more hasty. 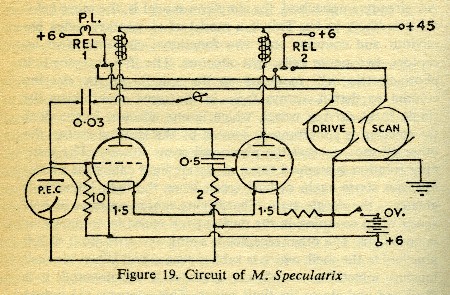 The electrical circuit is shown in figure 19. This is only one of many possible arrangements, but is probably the simplest in components and wiring. The photo-cell is a gas-filled type, and generally needs no optical system, a single light-louvre giving sufficient directionality. It is convenient to connect the tube between the grid of the first amplifier tube and the negative side of the 6-volt accumulator needed to run the motors. This gives sufficient sensitivity for an ordinary flashlamp to control the device, and avoids overdriving the miniature tubes; but other connexions are possible, particularly if other types of amplifiers are used. The grid of the input tube is connected to the positive side of the 6-volt battery through a 10 meg. resistor; illumination of the photo-cell can therefore only change the bias on the input tube from zero to about 4 v, negative. In the dark the first tube, having zero bias, passes its full current, and the relay in its anode is ‘on’. This tube is a triode or a triode-connected pentode. The relay should have a resistance of about 10,000 ohms, or rather less than the anode impedance of the tube, and a single pole change-over contact. The resistance of this relay and the anode impedance of the first tube form a potentiometer which fixes the screen voltage of the second tube. The anode of the first tube is thus connected directly to the screen of the second and also through a 0.5 mf capacitor to its grid. This provides a relatively high gain for changes in illumination and steady-state amplification when the input is larger. Living systems commonly differentiate or ‘adapt’ to moderate changes in stimulus strength but respond steadily to intense stimuli. The effect of this coupling is to permit transient interruption of the scanning motion when a faint light enters the photo-cell, thus gradually bringing the model on to the beam at a distance, then a steady inhibition of scanning when the light is brighter or nearer. The relay in the anode of the second tube is of the same type as the first, but the moving contact goes straight to the positive terminal of the 6-volt battery instead of through the pilot light. The stationary contacts are connected in the same way, ‘on’ to the driving motor, ‘off’ to the scanning motor, in both relays; in faint light, relay two is closed momentarily; in moderate light it is held closed; and in bright light it remains closed but relay one opens, thus providing for swerving away from a bright light. 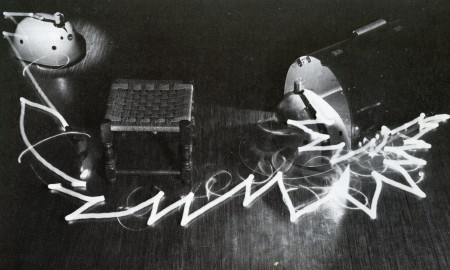 Long-exposure photograph of Elsie moving out of her hutch. 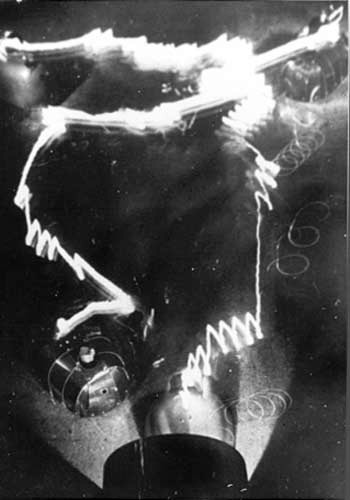 Elmer and Elsie responding to eachother

The pilot light, which is in series with the moving contact of relay one, is short-circuited when relay two closes, and is therefore extinguished when the driving motor is turned to full power and the scanning movement is arrested by light. When the light from the pilot bulb is reflected from a mirror into the photo-cell, it is turned off, but the disappearance of this light restores relay two to ‘off’ and the light appears again. This provides the self- and mutual-recognition modes. Several circuit variations are possible; the effect of light can be reversed by inverting the photo-cell connexions, and the relays may at the same time, or independently, be reversed also. The photo-cell may be positioned to face in the opposite direction from the movement, and so forth. 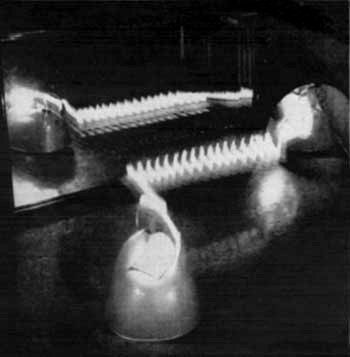 Elsie looking at herself in the mirror: self-awareness ??

The mechanical design is usually more of a problem than the electrical. Remembering that all power must be carried, a clear optimum exists for battery capacity, chassis dimensions, motor power, and the like. There is not a great choice of motors; those used for driving small home-constructed models are adequate but not efficient owing to their disproportionate frictional losses. It is often advisable to re-bush the bearings of these motors with a self-lubricating bearing. The gear trains to the driving and scanning shafts are the most awkward parts for an amateur constructor. The first model of this species was furnished with pinions from old clocks and gas-meters. The ration should be about 100:1 for the driving and 180:1 for the steering mechanism, and is best obtained with simple single pinions, since small worm-gears are wasteful and liable to seize when forced backwards, as happens sometimes when the model is in difficulties.
The weight-distribution is critical, since the front wheel is turning almost continually through 360 degrees even when there is no forward motion. The forward weight should be only just enough to ensure an adequate grip for the front tyre, and the centre of gravity should be just forward of the line joining the rear wheels. The front tyre should be rubber, but thin and fairly hard, so that it can turn easily. The rear tyres should be softer and larger. The wheelbase determines the turning circle and should be about six inches, the rear track being about seven inches. Since the motion of the model is a combination of linear and circular displacements, its gait is cycloidal, and once it has lost a target, a complete rotation of the steering scanning shaft may be necessary to pick it up again. The continuous rotation may be replaced with a reciprocating system using a windscreen-wiper motor geared up to 2:1 to give 360 degrees sweep; but this also has disadvantages. The model may be made into a better ‘self-directing missile’ by using two photo-cells in the usual way, but it will be a worse ‘animal’, for though it will keep more closely to its beam it will have to be aimed roughly in the right direction and will not ‘speculate’ – that is, spy out the land – not will it solve Buridan’s dilemma. 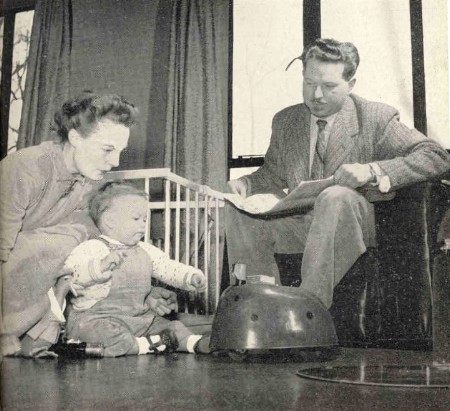 The Grey Walter family including Elsie.