On and off in the past months I have been working on a project on the invitation of ‘Utopisch Nest’, a collaboration between Municipal Museum De Lakenhal and music-theatre ensemble De Veenfabriek, both in Leiden. Every year they invite one or more artists to develop a dialogue- and research-oriented project that has a thematic connection with the exhibitions or the performances developed within these institutions. With this post and a few following ones, I want to catch up with the project I have been developing, starting with some of the backgrounds and moving into my own work, which I feel will be the beginning of something that will run over a much longer period of time.

I had an immediate click with the Utopia exhibition that has been in preparation for a long time and that has recently opened in Museum de Lakenhal. It is an exhibition that starts from the continuity between expressionism and constructivism and that also shows that in many ways the expressionists were perhaps more radical in their utopian thought than the constructivists. The radicality of the Utopia sketched in many of the works reminded me of another strand of thought in especially the Russian art of that period, within those artist’ circles where the differences between symbolism, expressionism and constructivism are not clear-cut at all. And that strand of thought linked it to some other long-running interests of mine that I have never had the time to explore more in depth in my own work.

The core inspiration behind #47 can be formulated as an investigation into the ‘maakbaarheid’ of our perception, ‘maakbaarheid’ being a perfect Dutch word for this occasion, and for which I would not know a suitable English equivalent. The word has clear utopian or modernist connotations since it is mostly used to refer to the remaking of society or the remaking of man. In English, the word ‘makeability’ would perhaps be the most literal translation, or, when talking about perception, ‘plasticity’ would be an obvious choice, but both of those words lack that Utopian ring.

The sources of inspiration of this project can be divided like so:
– the research of Jakob von Uexküll into the sensory worlds of animals,
– studies of the senses of animals, especially senses that are very different from ours,
– the ideas of certain artists about the role artist have in shaping the perceptual abilities of their audience, most articulate in the ideas on ‘extended vision’ developed by Michail Matyushin and his students.
– research into sensory substitution and sensory augmentation, and especially the work of Paul Bach-y-Rita. 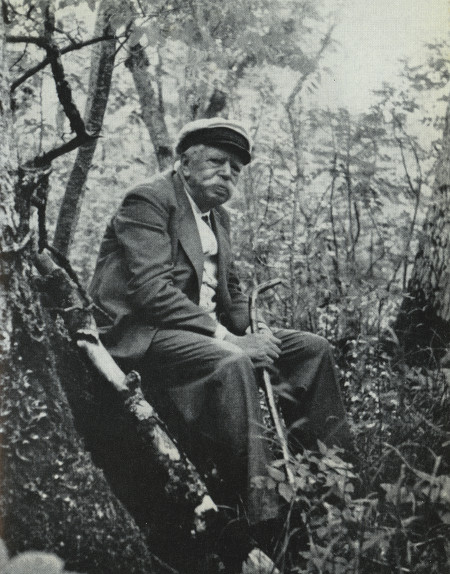 First about Jakob von Uexküll, since I’ve been interested in him for the longest time and because I believe his ideas are the most fundamental to this project.

When making my film #11, around 15 years ago, I found out about Uexküll via a mention of him in Stephen Kern’s book ‘The Culture of Time and Space 1880 – 1918’. Kern talks about him as one of the thinkers who contributed to the idea that space and time are not absolute, but relative to cultures, to individuals even, or in the case of Uexkull to species. 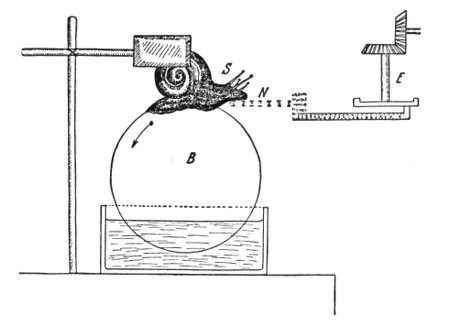 A lot of what I find interesting about Von Uexkull is demonstrated in his discussion of one of my favourite images of a scientific experiment ever: a snail experiment Von Uexküll refers to in his ‘Streifzuge durch die Umwelten von Tieren und Menschen’ from 1933, unfortunately without mentioning the name of the ‘young experimenter’ whose work this was. In Von Uexküll’s words:

“A snail is put on a rubber ball that can move under it without friction, since it is floating on water. The snail’s shell is being held by a clamp. In this way the snail is free in its crawling motions, but will stay on the same spot. When we put a little stick in contact with its foot, the snail will crawl on it. When we hit the snail 1-3 times a second with the little stick, the snail will turn away. But if we repeat the contact four times or more per second, it will start to climb the little stick. In the ‘Umwelt’ of the snail, a stick that moves to and fro at a speed of four times per second has already become a stick at rest.”

If I try to formulate what I see as the essence of the ideas of Von Uexküll it would be that the world of every animal only consists of those things in the environment it can interact with. Von Uexküll explains this by giving examples of species with simple worlds, such as ticks, some single cell organisms, and jellyfish. In his ‘Umwelt und Innenwelt der Tiere’, from 1909, he for instance explains that the jellyfish can basically do only one thing, which is to contract, a motion that both propels it and brings water with food into its ‘stomach’. And this motion is triggered by nerve cells on the edge of the jellyfish, cells that trigger the next contraction as soon as the one and only muscle has fully relaxed after the previous contraction. 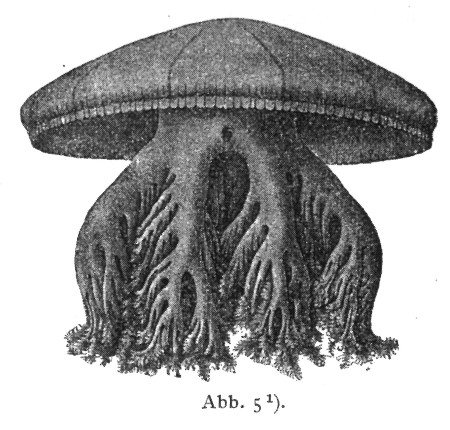 “When, from the deck of a ship, one looks out over the shimmering surface of the blue sea and sees the silent bells of the jellyfish float in innumerable flocks, like wonderful flowers of a magic garden, we are inadvertently struck by a feeling of envy. To be able to float in all this colourful splendour, free and light-hearted, rocked by the resounding waves, through radiant day as well as glistening moonlit night, must be a delightful fate. But the jellyfish doesn’t sense any of this. The whole world that surrounds us, is closed to it. The only thing that fills its inner life, is the steady agitation, which, triggered by the animal itself, always arises and passes in the same sequence in its nervous system.” 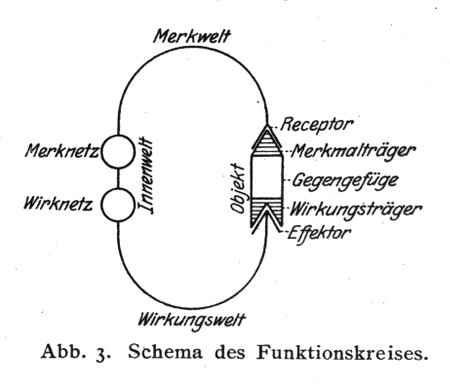 In the vocabulary of Von Uexküll, the jellyfish has an exceptionally simple world, consisting as it does of one loop that hardly includes anything of its environment. For animals with a richer world, that world is the sum of a number of ‘Functionskreise’ (‘Functional loops’). In each of those, one ‘Merkmaltraeger’ (‘sign’) triggers a behaviour that is aimed at eliminating its triggering sign, so the loop goes from sign to sense organ to effector organ that makes a change in the environment and eliminates the sign in some way or other. Simple organisms have two or three of such loops, complicated organisms like humans have many many of them, and two species share those parts of their world where these loops overlap or intersect. We humans have a relatively rich world because we have many of these loops, with many signs in our environment that can be triggers for action of some sort.

I find this image of what our world is very precise and productive, and very intriguing too, since it immediately raises the question whether we can have access to those worlds that different from ours. Interesing about this is that these other worlds are parallel, but in a very concrete sense; true extra dimensions without any need of vague or esoterical mumbo-jumbo. And in some sense much of the work of Von Uexküll can be seen as an attempt to develop a vocabulary to understand more of the inner logic of the worlds of different species, while trying to stay out of the trap of presupposing our human world as the true one.

A good example of one of the words in his vocabulary is the notion of ‘Die Fernste Ebene’ (‘The Farthest Plane’), which embodies the limit of the physical world of each species. It is the distance beyond which we can not act:

“the space peculiar to each animal, wherever that animal may be, can be compared to a soap bubble which completely surrounds the creature at a greater or lesser distance. The extended soap bubble constitutes the limit of what is finite for the animal, and therewith the limit of its world; what lies behind that is hidden in infinity.”

The reason I find this such a powerful image is that it is very tangible: it is our bubble that makes us see the sky as a curved dome; there is nothing that is really curved out there. 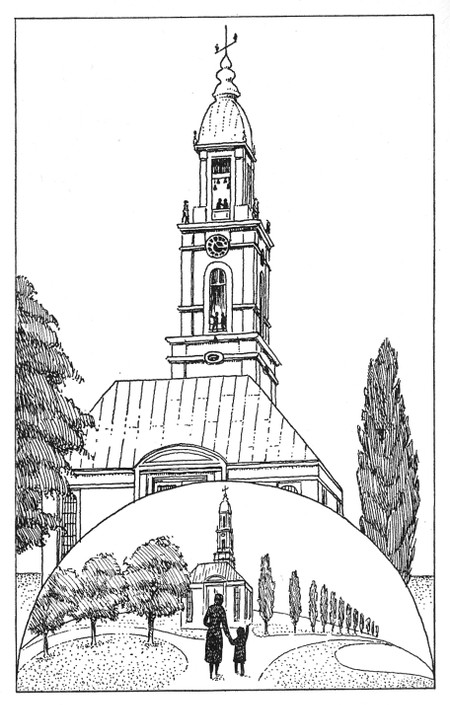 Von Uexküll had a turbulent biography; born in 1864 he was a Baron in the german-speaking nobility in Estonia, studied in (amongst many other places) the lab of Etienne-Jules Marey, lost his family fortune because of the Russian revolution, finally got offered a position in Hamburg in 1924 and built up his Institut für Umweltforschung there until 1940, when he retired to Capri, 76 years old.

His ideas have directly influenced philosophers like Heidegger, Merleau-Ponty, Von Glasersfeld, Deleuze and Agamben; it was in fact in one of Agamben’s books that I first read that those aspects of Heidegger’s thought I can most relate to, are in fact heavily inspired by the work of Von Uexküll (a great, recent study of some of these influences is the book by Bret Buchanan). Apart from this, his work is often cited as a precursor of cybernetics and radical constructivism and I can see many similarities between his ‘Funktionskreis’ and the strange loops that are so pervasive in the ideas around Autopoiesis by Humberto Maturana and Francisco Varela. Also the work of Von Uexküll is a crucial precursor of the ‘New Artificial Intelligence’ and the work on situated robotics by people like Rodney Brooks. All very interesting stuff, interconnected by many strands, a lot of which started in the work of Von Uexküll, but still, in my opinion, few of these authors reach the clarity and radicality of the writing of this man himself.

And to bring these ideas back to my project, one way to formulate the research questions behind it would be in terms of the ‘Funktionskreis’ of Von Uexküll:

can we extend our world by making new feedback loops through the environment ?
can we make new ‘Funktionskreise’ by building devices that can act as new senses ? 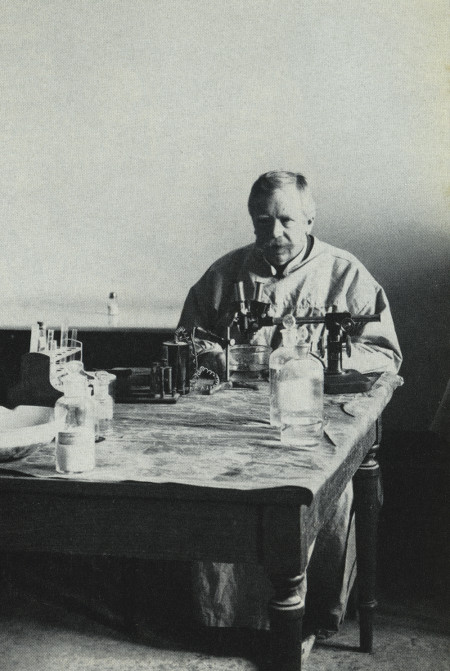