A collection of early cybernetic artificial organisms. The most well-known (and arguably the most interesting) are the tortoises made by Grey Walter around 1949 (see this page), but it turns out there are many others. I would be very grateful for more information on some of the more obscure ones, or pointers to other synthetic animals which belong in here: 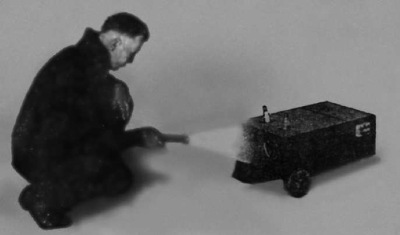 This was designed and built by John Hammond, Jr. and Benjamin Miessner in 1912. It had two selenium cells as eyes, so it is logical to assume that the right cell was controlling the power for the left motor and vice-versa, so that the dog moves towards the light source. It was inspired by the theories of Jacques Loeb, who saw such ‘tropisms’ as the basis of all animal and human behaviour.
The grim purpose of the research by Hammond and Miessner was to develop systems to guide torpedoes. In 1915 they built a ‘dirigible torpedoe’ based on the same principle as the dog. Miessner wrote in 1916:
“The electric dog, initially a ‘scientific curiosity,’ may within the very near future become in truth a real ‘dog of war,’without fear, without heart, without the human element so often susceptible to trickery, with but one purpose: to overtake and slay whatever comes within range of its senses at the will of its master.”
It seems that both Hammond and Miessner were active in the design of electromechanical music instruments after WW I.

in my translation:
“It was presented in 1929 at the International Salon of the TSF in Paris and at the International Exhibition of Magic-City. It was the work of Henry Piraux, now head of technical propaganda at the Philips company in France, whoshould hence be considered as one of the pioneers of Cybernetics. Sensitive to light, this dog followed an electric torch; turned and twirled around as often as it was told to do. But when the light was presented too closely, just under its nose, it started to bark, not happy at all.”

Built by Thomas Ross at the University of Washington. In 1933 he built an arm that could point out a solution to a maze, in 1937 he built a mobile robot to do the same. W Grey Walter writes:
“The first attempt to make a machine that would imitate a living creature in performance, as distinguished from appearance, seems to have been suggested by the familiar test of animal intelligence in finding the way out of a maze. Thomas Ross in 1938 made a machine in America which successfully imitated this experiment. By trial and error it could ‘learn’ to find its way to a correct goal on a system of toy-train tracks.”
Thomas Ross wrote in 1937:
“This machine runs through a twelve-unit, multiple-Y maze in which the twelve sections are so arranged that each has one blocked branch and one branch that opens into the stem of the next section. placed at the beginning of this maze and set in motion by connection to an electrical supply, the machine will begin rolling through the maze on its three wheels. Being constructed with a tendency to turn to the right, it will, on coming to the forking of the first Y-section, run down the right-hand passage. If this passage is blocked (by a vertical wall at the end) the machine will back out of that passage and turn to the left upon again starting forward. Since the maze is so arranged that one passage in each section is open, the left-hand passage will now lead directly to the beginning of the next section of the maze, at which point the machine will receive a ‘cue’ that it has entered a new section as it brushes its two metal ‘feelers’ against a pair of blocks set on the sides of the passage. ( … ) On being again started through the maze, the machine will go from beginning to end without entering any of the blind passages which it entered on the first trip through, and every time after will repeat the performance without ‘error’.”

in my translation:
” Another ‘electronic dog’ was going to be presented at the New York World Fair of 1939; sensible to heat, it would have thrown itself on all the visitors in order to bite their ankles; but at the eve of the opening, it died, victim of its own sensibility: in the night it saw the headlights of a car through a door which had been left open, hurried towards the light and caused itself to be run over, notwithstanding the driver’s attempts to avoid it.” 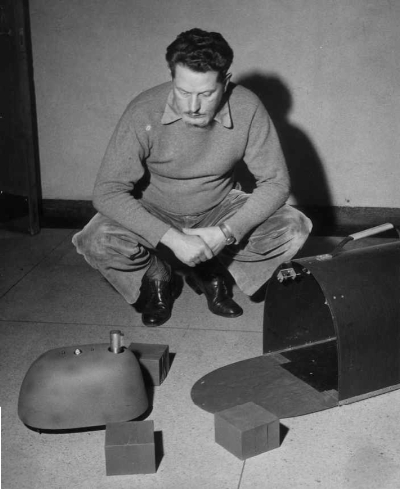 Built by Grey Walter, see my page in the ‘sources’ section of this site. 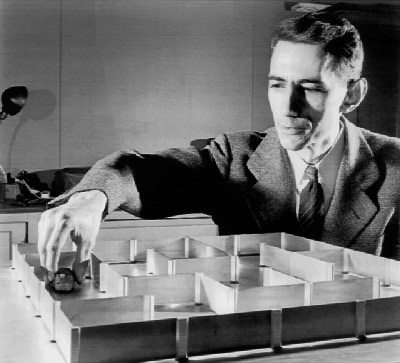 In 1950 the famous information theorist Claude Shannon built a mouse that could find its way through a maze:
“it was a magnetic mouse controlled by a relay circuit that enabled it to move around a maze of 25 squares. Its dimensions were the same as an average mouse. The maze configuration was flexible and it could be modified at will. The mouse was designed to search through the corridors until it found the target. Having travelled through the maze, the mouse would then be placed anywhere it had been before and because of its prior experience it could go directly to the target. If placed in unfamiliar territory, it was programmed to search until it reached a known location and then it would proceed to the target, adding the new knowledge to its memory thus learning.” (from Wikipedia) 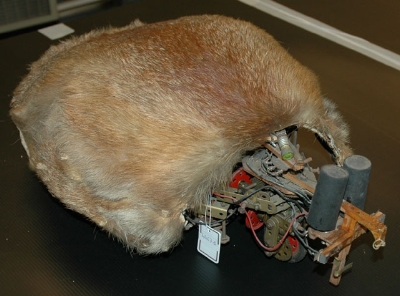 At least two of these were built by Albert Ducrocq between 1950 and 1953. They consisted of a fox skin, some mecano parts and many electronic sensors: two photocells for eyes, a microphone for an ear, several touch contacts and even a capacitive sensor which enabled it to sense objects at a distance. Pierre de Latil only mentions this capacitive sensor when he describes ‘Miso’; an electronic fox that avoids humans. Recently ‘Job’ (see pictures) has been acquired by the Musée Arts et Metiers and is being restored. 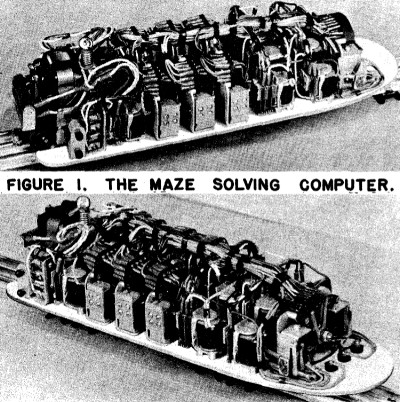 An electromechanical device that can solve mazes built out of special tracks, designed by Richard A. Wallace. Seems to be inspired by the work of Thomas Ross from 1938. 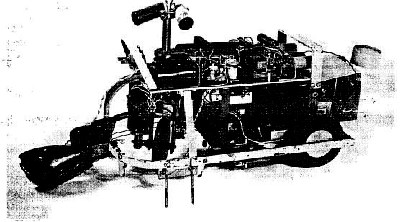 Edmund Berkeley designed several strange machines that were mostly meant as ‘show-stoppers’; machines to catch the attention of the public. The electronic squirrel ‘Squee’ contains four sense organs (two phototubes, two contact switches), three acting organs (a drive motor, a steering motor, and a motor which opens and closes the scoop or “hands”), and a small brain of half a dozen relays. It will hunt for a ‘nut’. The ‘nut’ is a tennis ball designated by a member of the audience who steadily holds a flashlight above the ball, pointing the light at Squee. 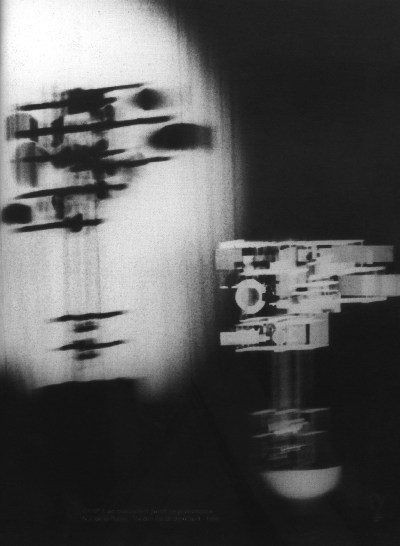 A milestone in the history of modern art: the mobile sculpture CYSP I, developed by artist Nicolas Schöffer in collaboration with Philips France. Through a number of photo-electric cells and a microphone it reacted to variations in light intensity, colour and sound intensity in its environment. It could move around on a mobile base and in the sculpture itself it had several lights and motors that it could activate. In may 1956 it made its solo stage debut at the Sarah Bernard theatre in Paris. 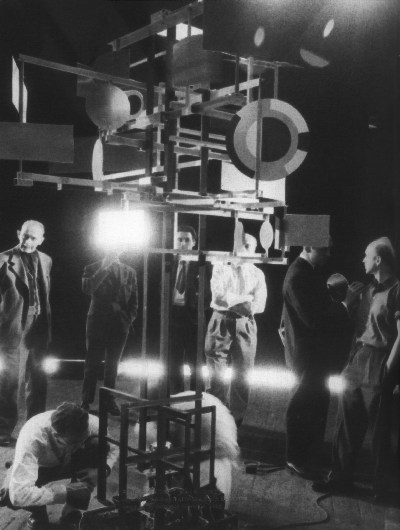 about specific robots:
– Thomas Ross, “Synthesis of Intelligence – Its Implications”, Psychological Review, 1938, vol. 45.
– Owen Holland, “Exploration and High Adventure: the legacy of Grey Walter”
in Volume 361, Number 1811 of the Philosophical Transactions of the Royal Society A
– a page about Albert Ducrocq’s Electronic Fox
– a text by Richard A. Wallace about his “Maze Solving Computer”
– Blinkenlights page on Edmund Berkeley

I haven’t seen it (yet), but the most comprehensive publication covering the scientific side of this subject seems to be:
– Roberto Cordeschi, “The Discovery of the Artificial”, Springer 2002