I’ve just finished reading a book written in 1910 by Stéphane Leduc, a professor at the medical school in Nantes. I read the French version which is called “Théorie Physico-Chimique de la Vie, et Générations Spontanées” (Poinat Editeur, Paris, 1910), there is also a slightly reworked English version which was published in 1911 under the title “The Mechanism of Life” (William Heinemann, London, 1911).

Most of this slightly rambling kind of book talks about the implications of the organic shapes created by a rather simple physical/chemical process called ‘osmotic growth’, in which a chemical substance creates a semi-permeable membrane when it is introduced in a solution. According to Leduc these membranes not only look like cells, plants or animals, but they also have similar structures and even similar functional parts. Based on these kinds of analogies he proposes a new kind of science, called ‘synthetic biology’, in which for the first time biological hypothesis can be tested by way of laboratory experiments. These experiments would then consist of reproducing organic forms by way of osmotic growth.
I found the book very interesting because of the amazing photographs of artificial organic shapes in the test-tube and because of the striking similarities between some of his claims and the claims of some Artificial Life-researchers. Leduc wrote this book in a time when there was still very little understanding of the anatomy of cells, and way before DNA was discovered. Because of this historical distance many of his claims might seem imprecise and vague in 2007, but that made me also wonder what we’ll think about current Artificial Life research a hundred years from now. And in his days many biologists still thought that life was some kind of property of protoplasma (if I’m not mistaken). However, in his own time Leduc was not taken seriously by everybody: in 1907 the French Academy of Sciences refused to publish his papers in their proceedings, since they were dealing with ‘spontaneous generation’, which was deemed unscientific. 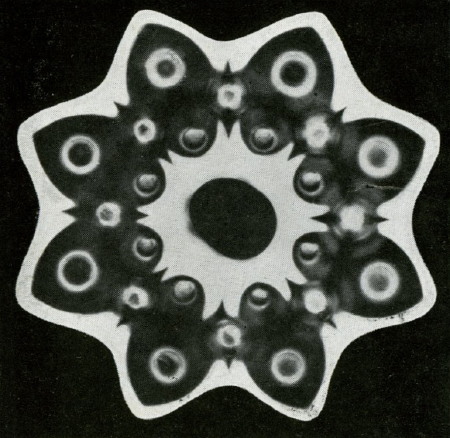 pattern generated by diffusion and cohesion 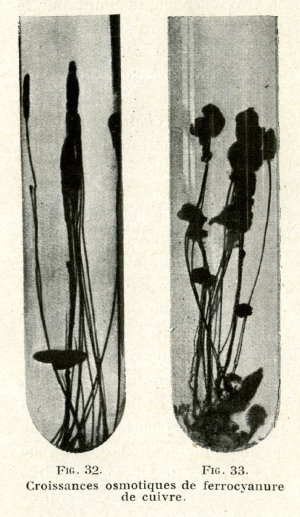 His ideas are perhaps best summarized in some quotes taken from the English version, towards the end:

“Osmosis produces growths of great complexity, much more complicated indeed than the more simple forms of living organisms. This marvellous complexity of an osmotic growth may be compared with another fact, the ontogenetic development of the ovum, a single cell which under favourable conditions of environment may evolve into a most complicated organism. These considerations lead to the belief that the beginning of life has not been the production of a simple primitive form from which all others are descended, but that a number of such primitive forms may have been produced, forms which by a rapid physical development attained a high degree of complexity. Osmotic morphogenesis shows us that the ordinary physical forces have in fact a power of organization infinitely greater than has been hitherto supposed by the boldest imagination.” (page 167) 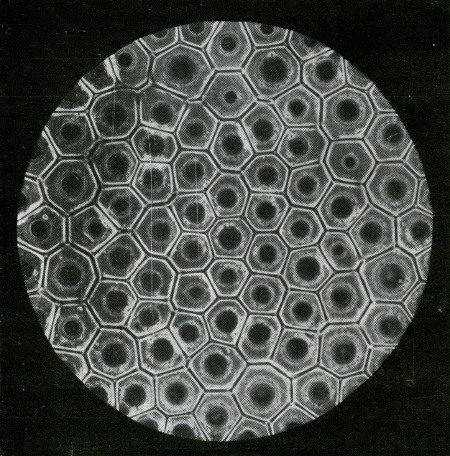 “Life is an ensemble of functions and of energy-transformations, an ensemble which is conditioned by the form, the structure, and the composition of the living being. Life, therefore, may be said to be conditioned by form, i.e. the external, internal, and molecular forms of the living being.
All living things consist of closed cavities, which are limited by osmotic membranes, and filles with solutions of crystalloids and colloids. The study of synthetic biology is therefore the study of the physical forces and conditions which can produce cavities surrounded by osmotic membranes, which can associate and group such cavities, and differentiate and specialize thier functions. Such forces are precisely those which produce osmotic growths, having the forms and exhibiting many of the functons of living beings. Of all the thories as to the origin of life, that which attributes it to osmosis and looks on the earliest living beings as products of osmotic growths is the most probable and the most satisfying to the reason.” (page 170) 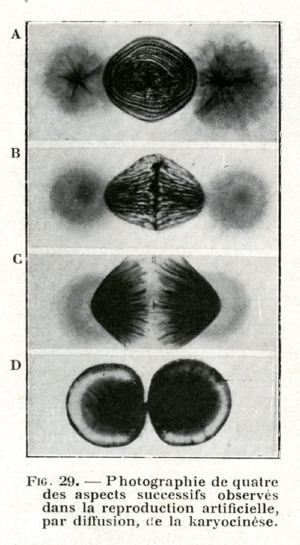 a chemical simulation of cell division using three drops of liquid in a solution.

“We have already seen that the seas of the primary and secondary ages presented in a high degree the particular conditions favourable for the production of osmotic growths. During these long ages an exuberant growth of osmotic vegetation must have been produced in these primeval seas. All the substances which were capable of producing osmotic membranes by mutual contact sprang into growth, – the soluble salts of calcium, carbonates, phosphates, silicates, albuminoid matter, became organized as osmotic productions, – were born, developed, evolved, dissociated and died. Millions of ephemeral forms must have succeeded one another in the natural evolution of that age, when the living world was represented by matter thus organized by osmosis.
The experimental study of osmotic morphogeny adds its weight of evidence in the same direction. When we see under own eyes the cells of calcium become organized, develop and grow in close imitation of the forms of life, we cannot doubt that such a transformation has often occurred in the past history of our planet, and the conviction becomes irresistible that osmosis has played a predominant role in the history of our earth and its inhabitants.” 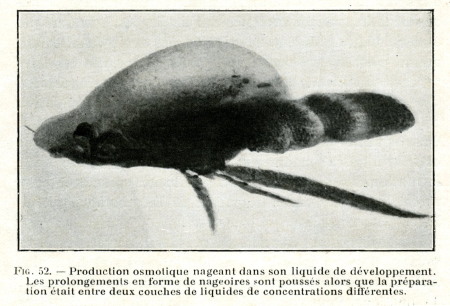 a ‘swimming’ product of osmotic growth, note the limbs !