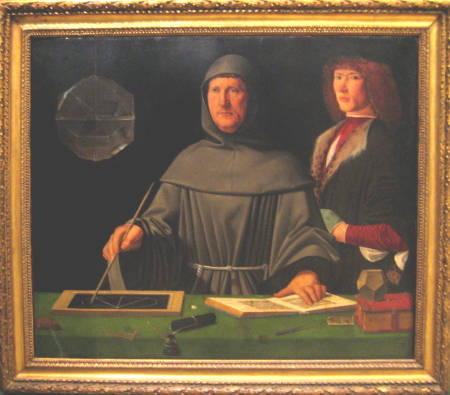 Last week in Napoli I revisited the Capodimonte museum and its amazing collection of paintings. At some point I found myself face to face with this canvas, attributed to Jacobo de Barbari, a portrait of the mathematician Luca Pacioli painted in 1495. Luca Pacioli wrote the only book on the golden section (“De Divina Proportione”) before it was made fashionable by Adolf Zeising in 1854, who was the first to link it to plant growth, art and architecture of past masters and pretty much anything else. But not yet any of this is to be found in Pacioli’s book. Interestingly Luca Pacioli also codified the art of bookkeeping into the form as it is still used today, demonstrating another link between the history of mathematics and the history of bureaucracy. And he was a friend of Leonardo da Vinci. 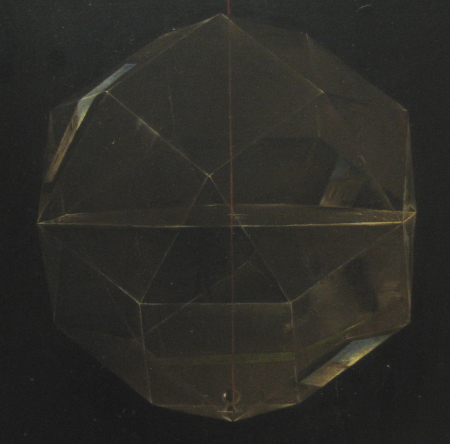 Anyway, in said painting I suddenly noticed the mysterious reflections in the gorgeous mathematical shape at the top left, a rhombicuboctahedron, made of glass and half filled with water. I took a picture, and when I zoom in on these painted reflections we see buildings and sky, as if to suggest that an open window in the room is being reflected in the glass facets. The direction doesn’t seem right though; am I wrong or do the reflections show that the window is high up towards the left ? Or rather towards the bottom right ? Both do not really make sense. Also in either case the light in the painting does not seem to be much affected by the source of these reflections. Is there a secret here, in the style of David Hockney ?

Perhaps the ‘secret’ here is pretty much the opposite of the kind of claims Hockney has made (he claims many early painters used the camera obscura to arrive at their realistic depiction of light effects); To me the way the same window seems to be reflected three times within this shape doesn’t seem terribly true to the laws of optics. Or more precisely: the seems true to a textbook notion of reflection and refraction of light in water, but the way the images are formed doesn’t seem very realistic at all. So this beautiful shape is perhaps present in the painting in order to illustrate an ancient optical law, first formulated by the Greeks (Ptolemy, if I’m correct), and in this way the shape possibly represents the link between mathematics and optics. Its depiction doesn’t seem based too much on observation or the tracing of reality through a camera obscura, but then again, I’ve never actually seen a glass rhombicuboctahedron half filled with water, so who am I to judge. 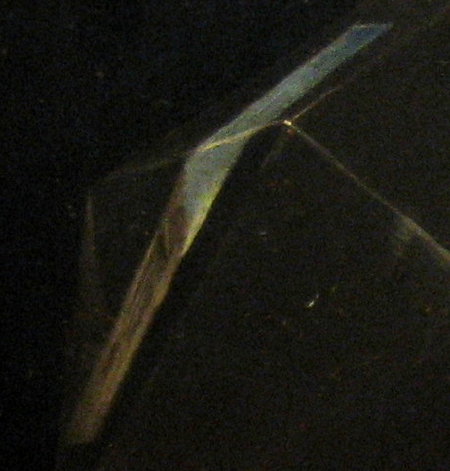 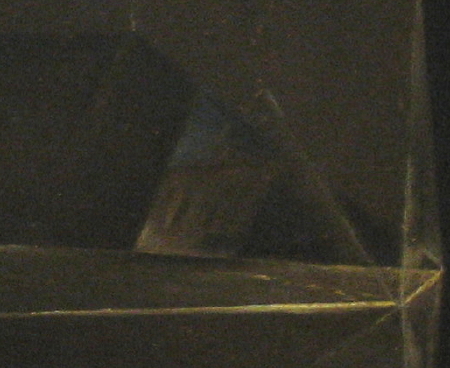 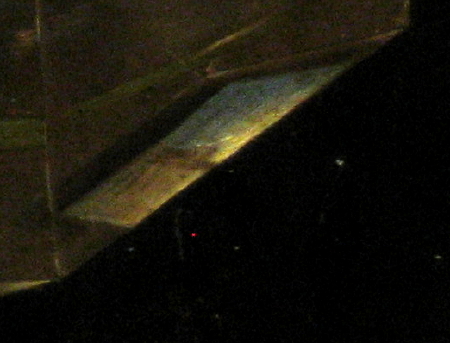