Tomorrow, at the Kontraste Festival in Krems (Austria), will be the premiere of a film I made before the summer, which I decided to call ‘#43’. It is part of the Vertical Cinema project initiated by the nice people of Sonic Acts and it is one of ten short films they commissioned in a unique format: Vertical Cinemascope (the same as normal Cinemascope, but in portrait/monolith mode, not landscape mode). 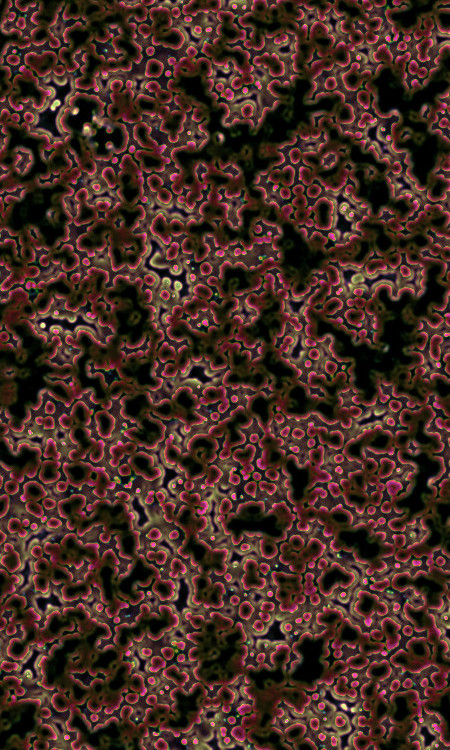 The film henceforth known as ‘#43’ is part of a long-running exploration of algorithms that are based on a combination of propagation and local interactions. Originally triggered by an encounter with simulations of how nerve impulses organise themselves into oscillations in tissues like heart muscle, for example, the project has since expanded to include an interest in the more general emergence of patterns in time and space out of homogenous starting conditions. These explorations are inspired by a set of ideas from biology and mathematics that first came to prominence during the development of cybernetics in the 1950s and 1960s, and that have since then evolved into more recent manifestations such as catastrophe theory, complexity theory and artificial life.

In my work, this has led to live visual work with improvised and composed music as well as moving images in various fixed and mostly non-standard formats. “#43.1, Lichenometry”, was my debut as live visuals performer outside of dance and theatre projects and has been a collaboration with different live music improvisers over the past two years, #43.2 was part of the ‘Palmtop theatre’ project by V2, #43.3 was the visual companion to the musical composition ‘Wavespace’ by Yannis Kyriakides for the ASKO Ensemble, #43.4 was a one minute video made as a commision for the ‘Modern Times’ project by Stichting Cinema Zuid in collaboration with the One Minutes and #43.5 is a new piece still in continued development for a spherical projection system as part of the ‘Sphaerae’ project of Cocky Eek in collaboration with Synergetica Lab and the ArtScience Interfaculty. So that would make “#43.7” the logical title for this film, except that it feels as a kind of temporary end point for my experiments with this particular class of algorithms.

An aspect of this film that is perhaps of mainly personal interest is that it has the first soundtrack for one my own films I did myself since my very first film #2, almost exactly 20 years ago.

So here goes the blurb:

The images in film #43 are generated by systems in which the pixels are agents that are, in some respects, comparable to cells in an organism. These systems are bumped into motion by disruptions that cause a difference between some pixels and their neighbours. Such an edge of difference becomes the seed for processes of decay and growth, an imbalance that embodies a store of energy for the system as a whole, similar to an electrical potential. Under some circumstances the cells in the system feed each other so that oscillations or other kinds of order are produced spontaneously, sometimes stable in themselves, sometimes feeding on noise to stay active.

The composition of this film was influenced by the work of logician G. Spencer Brown, who wrote his ‘Laws of Form’ in 1969. The book is a wonderful account of a new kind of logic that lends itself especially well to describe the seeming paradoxes of self-reference. The empty pages on which the book is written form the beginning, the end, as well as an integral part of the argument.

“What I try to show, in the final chapter, is the fact that we really knew all along that the two axioms by which we set our course were mutually permissive and agreeable. At a certain stage in the argument, we somehow cleverly obscured this knowledge from ourselves, in order that we might then navigate ourselves through a journey of rediscovery, consisting in a series of justifications and proofs with the purpose of again rendering, to ourselves, irrefutable evidence of what we already knew.
Coming across it thus again, in the light of what we had to do to render it acceptable, we see that our journey was, in its
preconception, unnecessary, although its formal course, once we had set out upon it, was inevitable.” 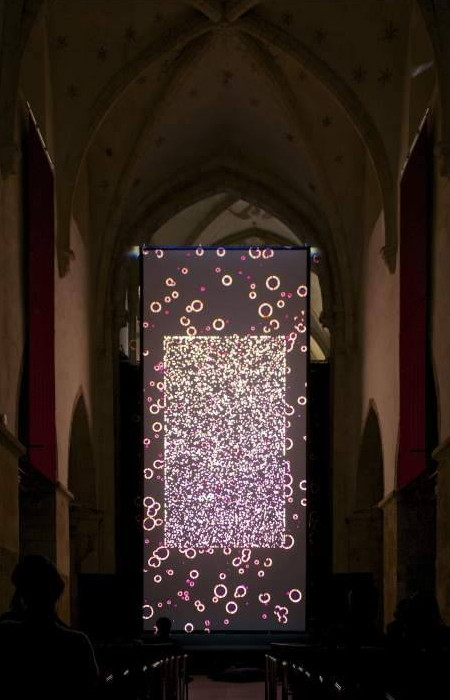