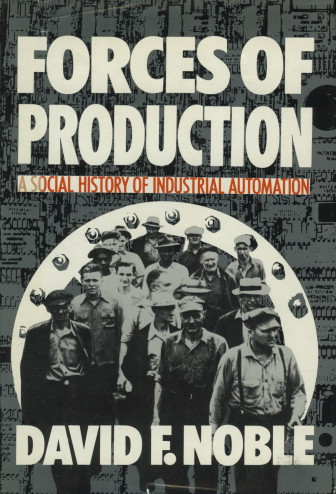 the cover of the first edition from 1984.

Some time ago I referred to one of David Noble’s books, since it led me on to the writings of Lynn White, but since a couple of days I have been reading the book for which David Noble himself is most well-known: “Forces of Production, A Social History of Industrial Automation” (Knopf, New York, 1984). It is not for nothing that it is his most well-known book, since it is a masterpiece. It is a study of the history of the development of computer-controlled tools for the production of machine parts, but, beyond that, the book aims to refute a vision of technology that has probably become only more dominant since it was written: technological determinism. I quote from his preface:

”
I do not intend here to try to account for the ideological inheritance of technological determinism – an impoverished version of the Enlightenment notion of progress – except to note that it has long served as a central legiti­mating prop for capitalism, lending to domination the sanction of destiny. Fostered over the years by promoters, pundits, and professionals, the habit of thought has been reinforced as well by historians, who have been caught up by it too, have routinely ratified the claims of promoters, and have found in such determinism an easy way of explaining history. The pervasiveness of the ideology reflects not only the fixations of machine-based commodity production or the estrangement of alienated labor but everyone’s desire for a simplified life. Technological determinism offers a simple explanation for things – especially troublesome things – and holds out the prospect of auto­matic and inevitable solutions. Ratifying the status quo as necessary at this stage of development, technological determinism absolves people of responsi­bility to change it and weds them instead to the technological projections of those in command. Thus, if this ideology simplifies life, it also diminishes life, fostering compulsion and fatalism, on the one hand, and an extravagant, futuristic, faith in false promises, on the other.

The aim here is to shatter such habits of thought, which allow us to avoid thought, in order better to understand both American technology and the society that has given issue to it. The focus upon technology thus has little to do with any particular interest in technology itself or in its history, for that matter, beyond the simple recognition of the importance of technological development in human history. Rather, this inquiry into the evolution of automatically controlled machine tools is an attempt to demystify technologi­cal development and thereby to challenge and transcend the obsessions and fantasies that artificially delimit our imagination and freedom of action. Hence, the aim is not merely to put technology in perspective, but to put it aside, in order to make way for reflection and revolution.
”

the first operational “numeric control” milling machine at MIT in 1951.

I am still reading the book and I find it is great, in its detailed history of a technology that has many points of contact with the history of electronics and computing I have been reading so much about recently, and also in the view it offers on the social history of the US since WWII. But in Chapter Seven – entitled “The Road not Taken”, he starts out with some more general remarks that are on a different level of interest for me; they should be part of my manifesto. In this long quote he takes on the currently most common form of technological Darwinism (another, perhaps more interesting form of technological Darwinism is still also quite virulent despite its age). I quote from pages 144-146:

”
It is a staple of current thinking about technological change that … a “successful” technology, having become dominant, must have evolved in some “necessary” way. Implicit in the modern ideology of technological progress is the belief that the process of technological development is analo­gous to that of natural selection. It is thus assumed that all technological alternatives are always considered, that they are disinterestedly evaluated on their technical merits, and that they are then judged according to the cold calculus of accumulation. Any successful technology, therefore – one which becomes the dominant and ultimately the only solution to a given problem – must, by definition, be the best, for it alone has survived the rigors of engineering experimentation and the trials of the competitive marketplace. And, as the best, it has become the latest, and necessary, step along the unilinear path of progress.

This dominant “Darwinian” view of technological development rests upon a simple faith in objective science, economic rationality, and the market. It assumes that the flow of creative invention passes progressively through three successive filters, each of which further guarantees that only the “best” alternatives survive. The first, the objective technical filter, selects the most scientifically sound solutions to a given problem. The second, the pecuniary rationality of the hard-nosed businessman, screens out more fanciful technical solutions and accepts only those which are practical and economically viable. The third, the self-correcting mechanism of the market, dooms the less savvy businessman and thus insures that only the best innovations survive.

But this facile faith assumes too much, and explains too little. It portrays technological development as an autonomous and neutral technical process, on the one hand, and a coldly rational and self-regulating economic process, on the other, neither of which accounts for people, power, institutions, com­peting values, or different dreams. Thus, it begs and explains away all impor­tant historical questions: The best technology ? Best for whom ? Best for what ? Best according to what criteria, what visions, according to whose criteria, whose visions ?

In reality, the “objective expert” comes to his work as prejudiced as the next person, constrained by the technical “climate,” cultural habits, career considerations, intellectual enthusiasms, institutional incentives, and the weight of prior and parallel developments – not to mention the performance specifications of the project managers and supporters. The full range of alter­natives is never considered simply because these constraints predetermine the range of “realistic” possibilities. In reality, too, the so-called bottom line­ minded businessman turns out to be a mythical figure as well. On closer inspection, the businessman who must justify his purchase of new equipment in terms of economic as well as practical viability, tends to be as prejudiced, mystified, and enthusiastic as his brethren in the laboratories. His seemingly sober justifications, more often than not, merely mask his real motivations and serve to sanction, and sometimes conceal, economic realities. Finally, the self-regulating market which is supposed to correct for such distortion and deception is too easily overwhelmed by the force of monopoly and the state, which sustain the more powerful dreamers at all costs.

In short, the concepts of “economic viability” and “technical viability” are not really economic or technical categories at all – as our ideological inheritance suggests – but political and cultural categories. Existing technolo­gies have rarely if ever been put to the rigorous tests of any disciplined “natural selection.” If they have ever been rendered technically and economi­cally viable, it has typically been only after the decisions were made to invest social surplus in their development and use, and these decisions were based not only upon mere guesses as to their technical and economic potential but also upon the political interests, enthusiastic expectations, and culturally sanctioned compulsions of those few with the power to make them.

All technological options, then, are not born equal. While new inventions are always at the outset “alternative technologies,” challenges to established ways of doing things which are initially received with caution and skepticism, some fit within the dominant scheme and others do not. Typically, however, only those which do not fit within this larger framework of preferred develop­ment are required to pass rigorous tests of immediate technical and economic viability. And, since these are not really technical or economic tests at all, but political and cultural ones, they are predestined to fail.

Thus, if a technology … develops in one direction and becomes ubiquitous in that form …, it is probably less a reflection of its actual technical or economic superiority than of the magnitude of the power which chose it, and of the dominance of the cultural norms which sanction that power. Conversely, if some alternatives have failed to survive, this does not necessarily mean that they were technically or economically inferior, but merely that they were deemed inferior according to the criteria of those in power, and thus denied. Once denied, moreover, their futures were further foreclosed by all subsequent investment in the preferred alternative, which rendered any revival of the lost possibility progressively less “realistic.”

The Darwinian ideology of technological progress, therefore, which cele­brates the survival of the fittest, does not so much side with technical or economic superiority as with social power. For this ideology is, in reality, merely a form of legitimation, ratifying social power and its dominant values and lending to its particular choices the sanction and dignity of destiny. In so doing, it blinds society to the full range of possibilities available to it as well as to the realities of its own history, structure, and cultural make-up. For these reasons, any effort to reconstruct lost alternatives, to travel down roads not taken, serves several purposes at once. First, it fills out the historical record and thus lays to rest the convenient fictions fostered by the ahistorical ideology of technological progress. Second, it reawakens us to a broader and largely available realm of possibilities. Third, it casts existing technologies in a new and critical light and thus stimulates reflection. Finally, and most important, such study of lost alternatives, which reveals the actual process of technological development, reveals also the patterns of power, cultural values, and the dominant ideas of the society which shaped that development.
“