a thing speaking for itself

As a consquence of my recent explorations of radar display tubes, I’ve become not only interested in tubes that turn electronic signals into light patterns, but also in those that do the reverse. Until the mid-1980’s all video camera’s were based on tubes in which a photosensitive surface is scanned by an electron beam. During scanning, differences of light exposure on that surface are translated into variations of voltage. Whereas digital image sensors consist of millions of picture elements and contain prodigious amounts of connections that allow each pixel to be read out individually, such analog camera tubes have amazingly few parts. The sensitive surface in camera tubes such as Image Orthicons or Vidicons is in one piece: a thin layer of carefully treated crystalline material. What I find interesting about this is that the image is not already subdivided into pixels or lines from the moment the sensor has been manufactured; such formalization of the image only happens when the photosensitive surface is scanned. This creates a space for all kinds of non-standard scanning methods that I am very curious to explore. 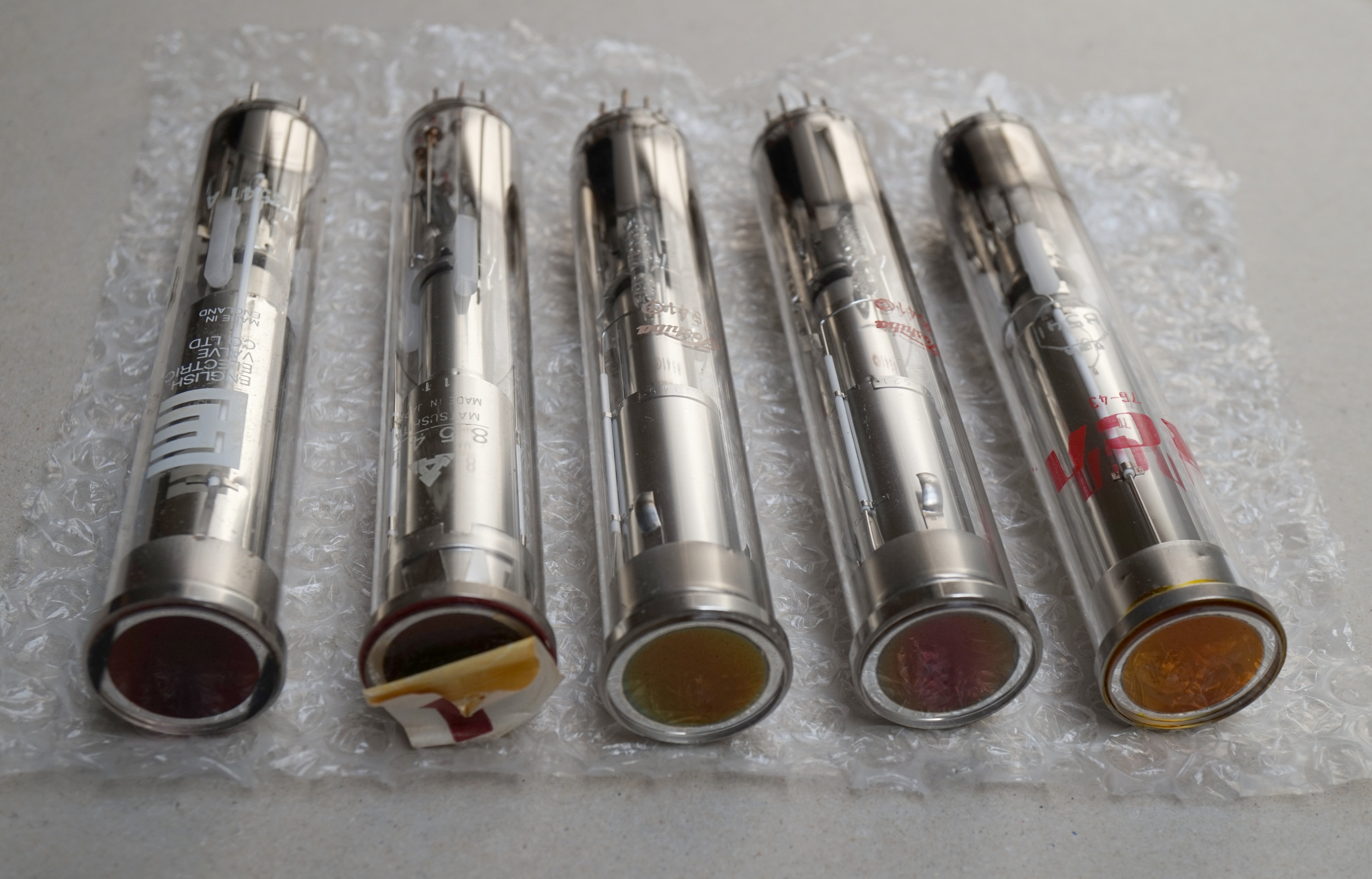 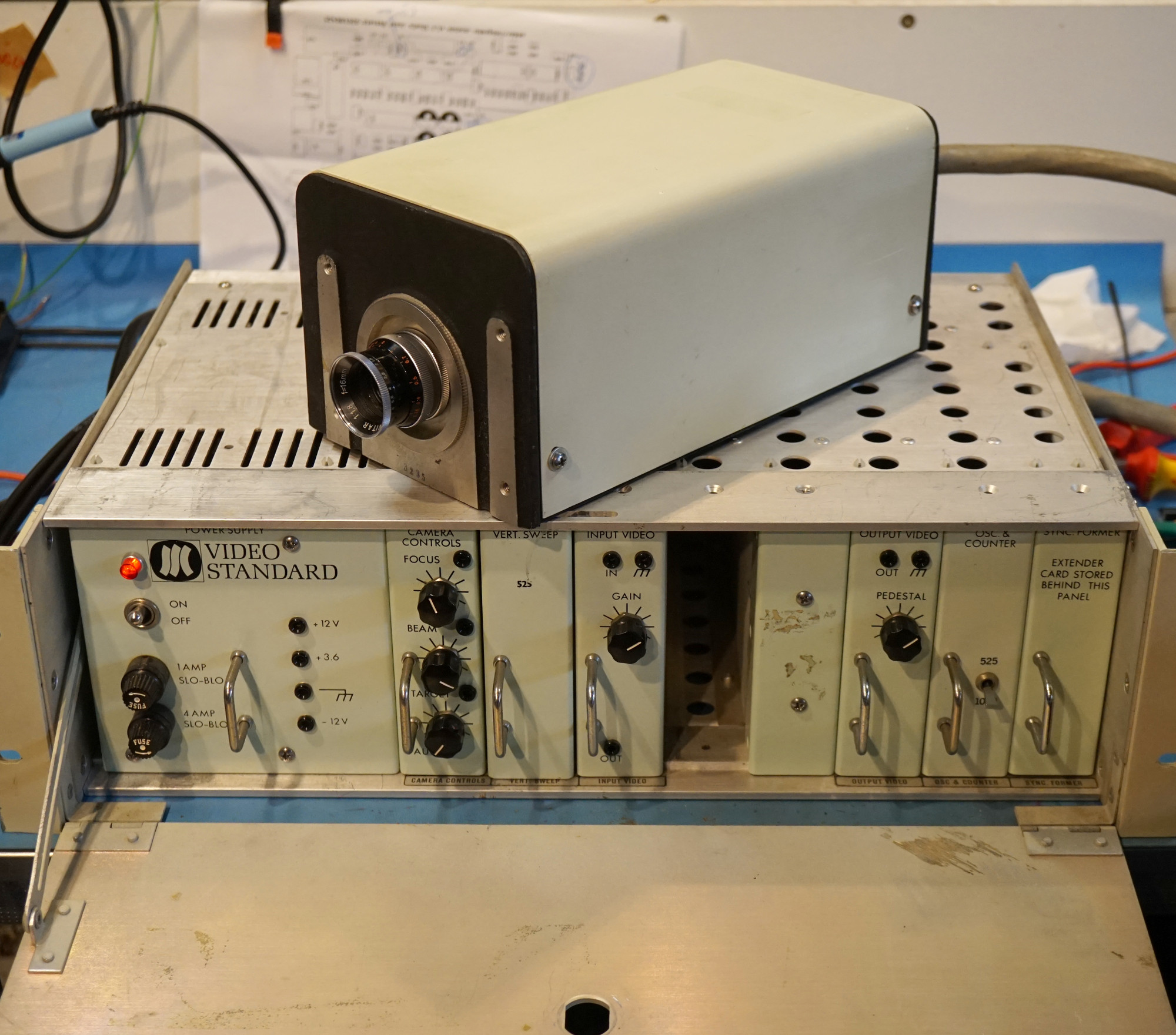 By a happy accident I found a 1029-line, high-resolution scientific video camera from 1976, so that I could start working towards a non-standard scanning project. I repaired and revised the controlling circuitry and did some first tests to see how such cameras work and how to obtain the most detailed images. From various sources on- and offline I found Vidicon tubes of the type prescribed for it. Some of these were probably used, some probably not and one was sold to me as ‘new old stock’. I was comparing the tubes for sharpness, the amount of ‘lag’ they have and how much beam current they need to work well, having learned from old books that lag and beam current are measures of how much the tube has been used, and that the higher the beam current that is necessary, the lower the effective resolution will be. Also I learned that these Vidicon tubes have what is called ‘raster burn-in’: tubes are round, and the part that is scanned to create the rectangular video image is physically altered by the electron beam, so that it ends up responding differently to the light than the rest of the tube surface. This is best seen when the tube is scanned while not being exposed to light. 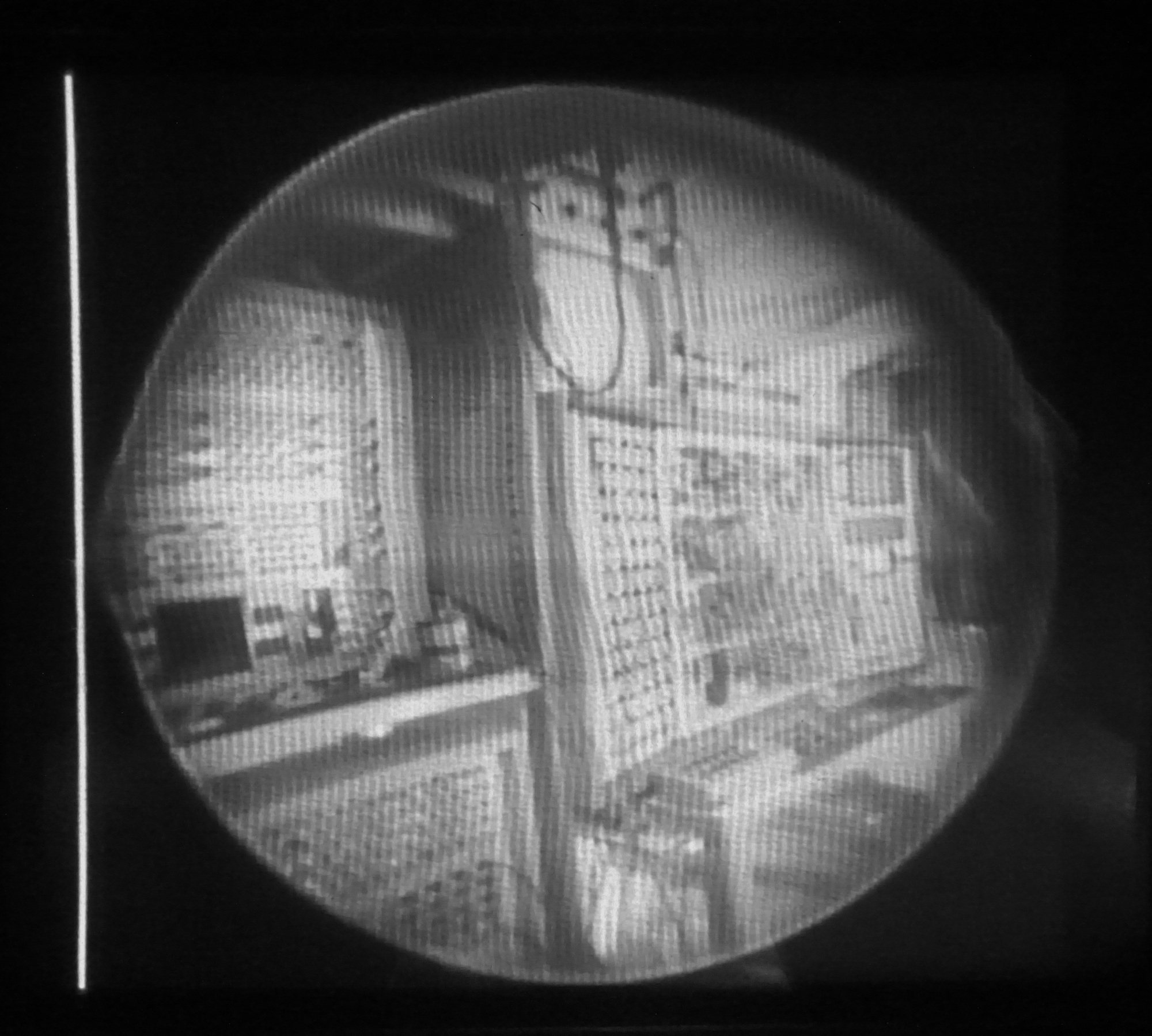 One of the first test images: a studio view while scanning the whole surface of the tube.

An example of Vidicon raster burn-in.

When unpacking the ‘new old stock’ tube I bought I noticed it had a sticker on the sensitive surface, and I assumed that must have been custom at the time for new tubes, even though after all these years the glue had completely dried out and would be tricky to remove without damaging the tube. I decided to test the tube anyway as best as I could, and was able to at least see some of my test image through the layer of glue on its surface. But when trying to look at it’s raster burn-in I saw a strange shape that after some adjustments turned out to be something else than a raster. It took me quite some time to realize that I was looking at a rather detailed image of a piece of pavement. This was an extremely unexpected and creepy experience. The test setup in my studio revealed an image from another time and place entirely: a ghost in the camera.
Far from being ‘new’, this tube could apparently look back on an active life inside a security camera, guarding the same door through many seasons and in different light- and weather conditions. Years of service burned in an image that it will now forever reproduce, every time it is being scanned without external light. This image is not limited by resolution: the level of detail in the latent image inside the tube is determined by the grain of the photoconductive surface, the quality of the camera lens, the stability of the camera mount, and by the common element in the changing light conditions over many years.
(do click on the image below for a higher resolution version) 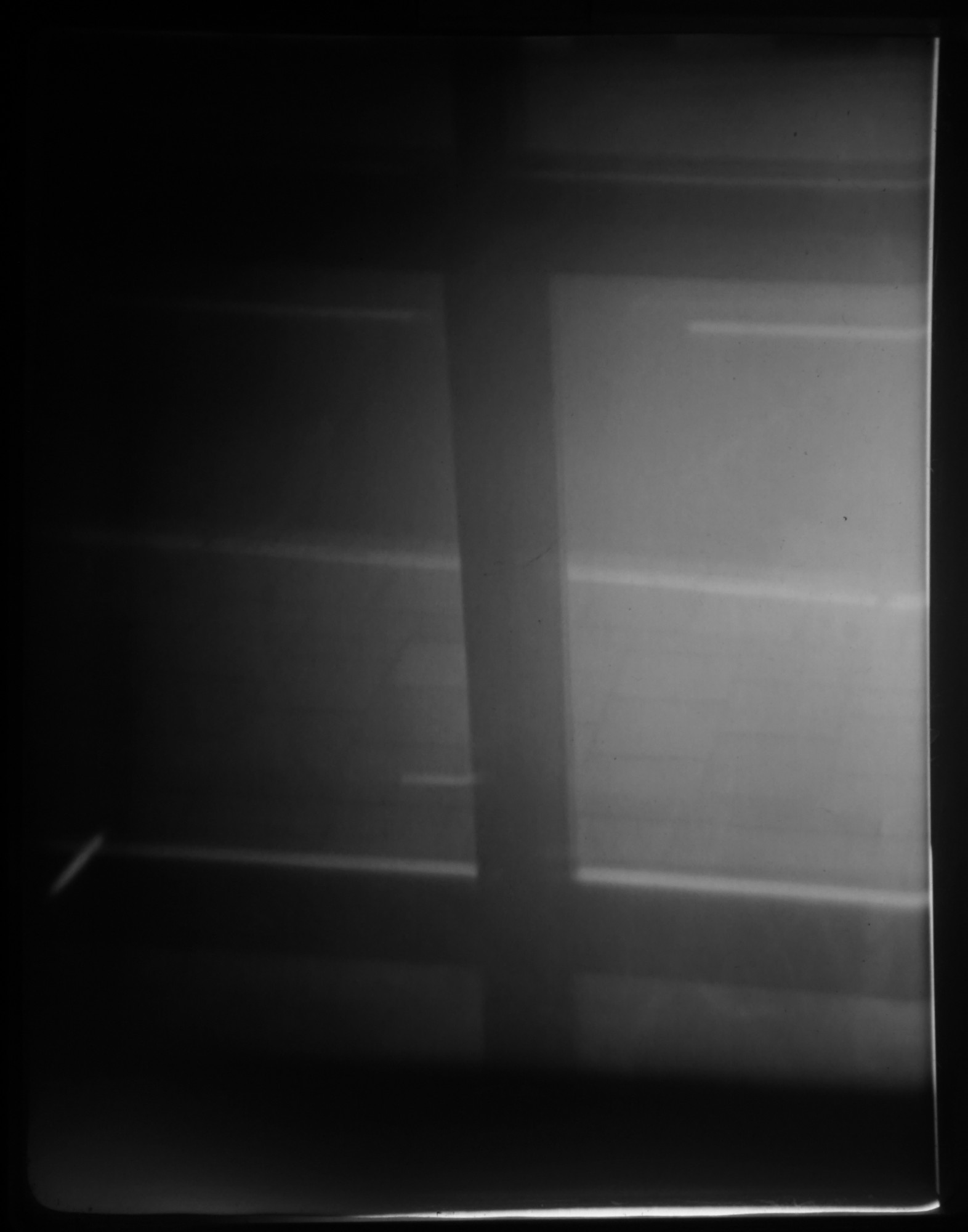 The image and its creepy mode of appearance reminded me of a story I sometimes tell to scare students: that of Willy Kühne‘s ‘optograms’. The story of the image below goes as follows: “In 1877, the German physiologist Willy Kühne confined an albino rabbit in a dark chamber for five minutes. He then positioned the rabbit before a window oriented towards the sky for three minutes. Kühne subsequently severed the animal’s head, removed an eye, opened it to separate the retina, and immersed the tissue in fixative for twenty-four hours. According to Kühne’s published report, the rabbit’s dying vision was distinctly preserved on the retinal sample. The image impressed there showed the characteristic pattern of the paned window, complete with perspectival foreshortening at the outer reaches of the visual field”. 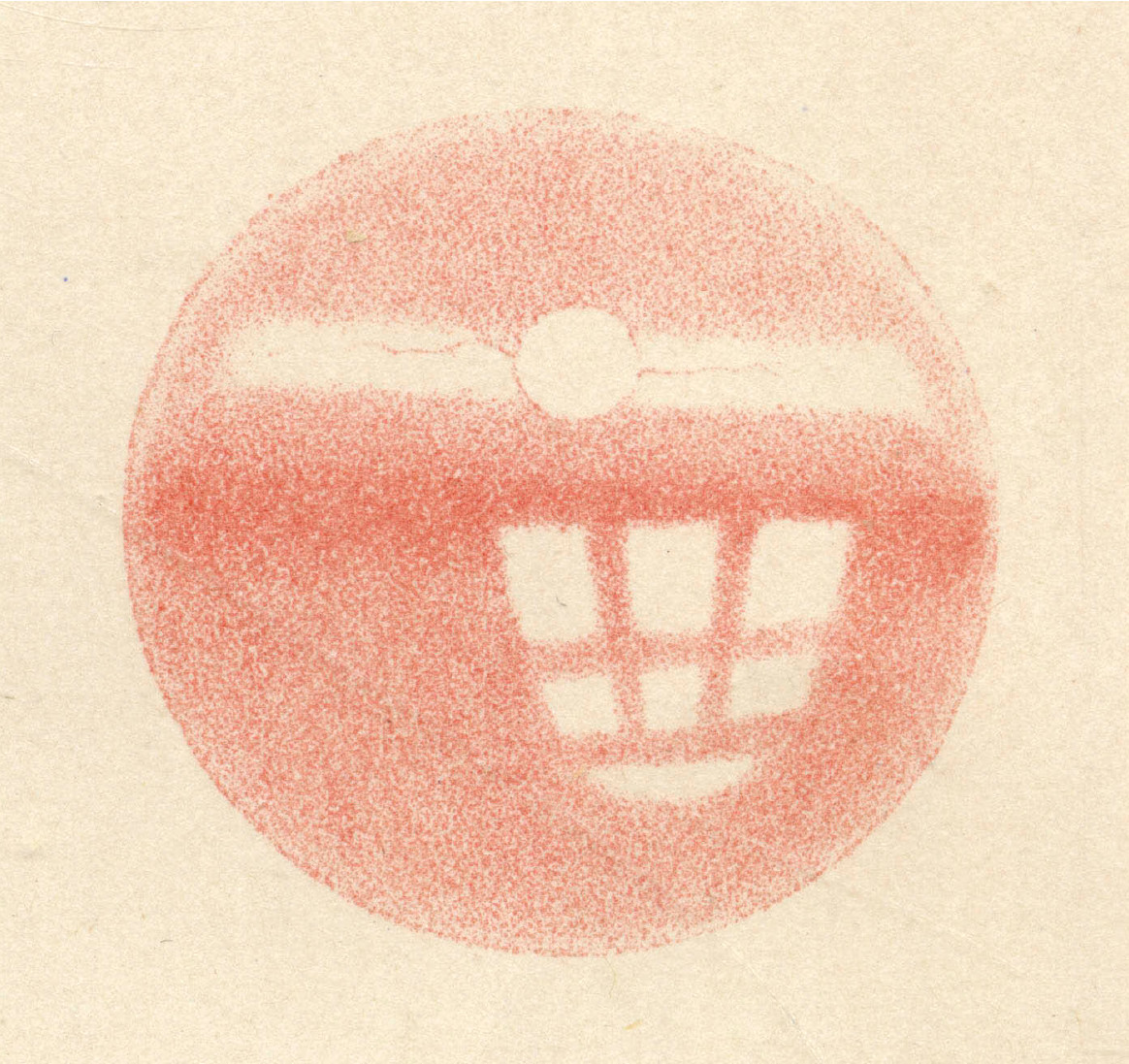 I first read this story many years ago in an old article in the Scientific American that had a rather low-quality reproduction, and when looking for the original lithograph I found an excellent article by Monica Bravo giving a lot more context to the optograms by Willy Kuhne. I never realized that for some decades police forces in several countries hoped that optograms would be able to show the victim’s perspective at the moment of death, leading them to try and photograph the retina’s of murder victims. Also, amongst many other things, Monica Bravo makes a very interesting connection with the history of the idea of the ‘Pencil of Nature’, in which natural images are those that are caused mechanically in accordance with physical laws, and she makes the equally very interesting suggestion that “the true value of photography in the late nineteenth century was not primarily in the photograph’s relation to its real-world referent, … but in the possibility that it might grant access to another living being’s way of seeing.”
From the same article also comes this amazing longer quote that seems especially relevant to the image that appeared in the vidicon tube above:

“Two examples suffice: in the Rhode Island Howland Will Case of 1870, the plaintiff’s counsel argued that the sun could make a statement in the form of a photograph, but because this testimony could only be made out of court and because the sun cannot be cross-examined, its statement was hearsay and should not be deemed admissible as evidence. A New York lawyer known as J. A. J. conversely argued in 1873 that the photograph differs from hearsay in the essential particular that it is free from uncertainty. For him, the photograph was an exact repetition, was actually ‘the thing itself’, and therefore its ‘mute testimony’ should be permitted in court. The former argues that it is the sun rather than an operator which makes a picture, and yet its testimony – although natural – is subjective. The latter neglects to distinguish the photograph from its referent, so that subject and object (nature and culture) are equivalent. In both examples, counsel argues that ‘the thing speaks for itself’, while simultaneously demonstrating that they must speak for it.”