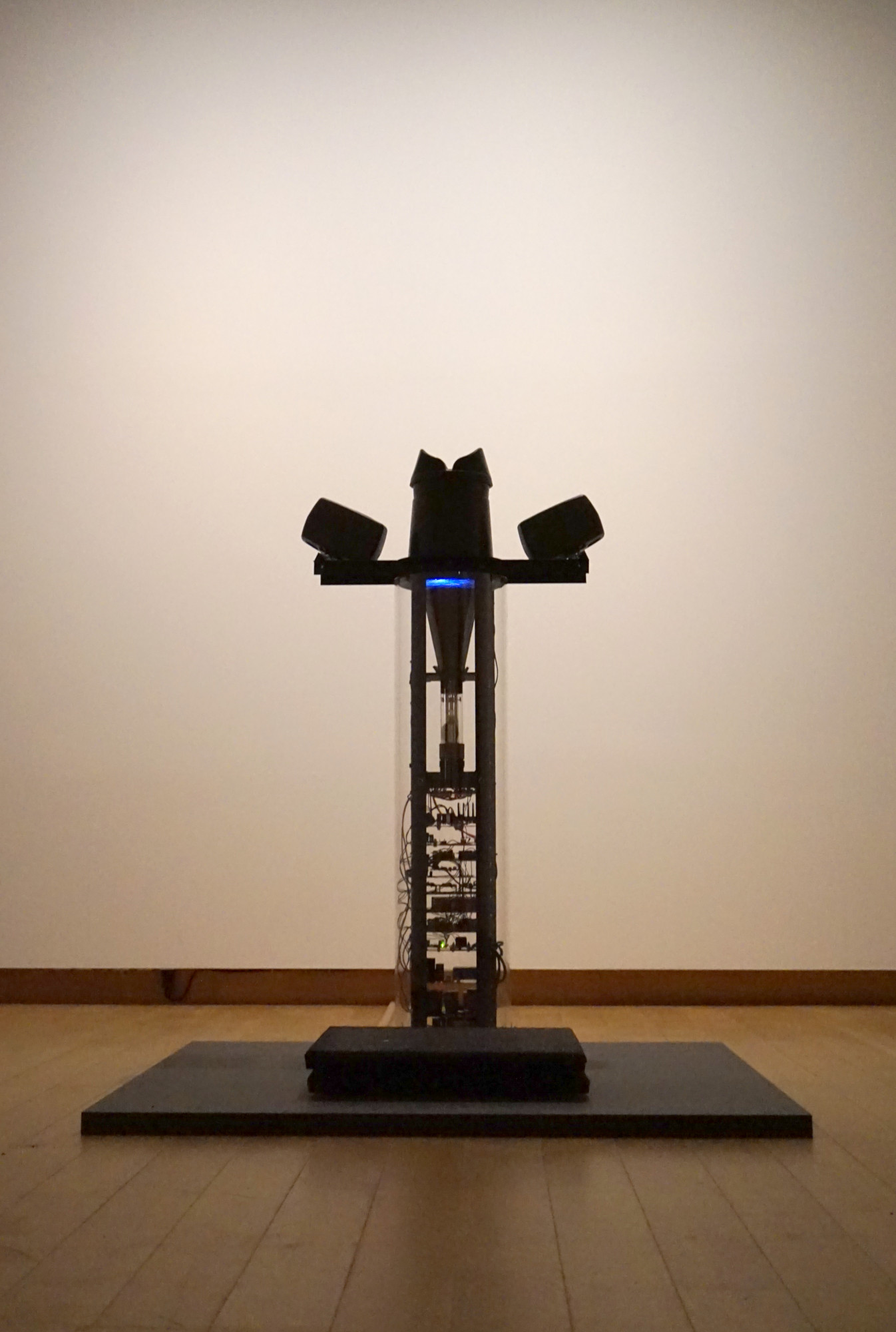 This year’s Sonic Acts festival saw the premiere of my new installation #71.1, as part of their exhibition in The Stedelijk Museum in Amsterdam. #71.1 is a generative audiovisual composition for radar display tube and analog chaotic circuit, an experimental outcome of my long-term research project ‘Dialogues with Machines’ at KASK, and commissioned by STEIM and Sonic Acts. 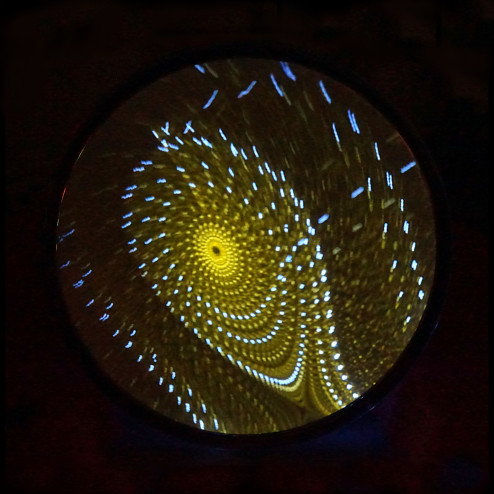 The official blurb runs as follows:

“#71.1 is a generative audiovisual composition for radar display tube and analog chaotic circuit inspired by the history of electron optics.
The first cathode ray tube from 1897 was the direct ancestor of the radiotube, the radar and television display tube, the particle accelerator, the electron microscope and the lithographic devices that produce most of our nanoscale electronics. It was the first device in which electrons could be directed, as a way to amplify and control signals, as a way to direct energy, or as a means to show invisible phenomena on a screen. In a vacuum, electrons behave similar to light, focused and deflected by electric and magnetic fields. #71.1 explores this analogy between light and electrons to create images that bring us closer to the substance of electronics.
This installation is an experimental outcome of a long term project that aims to give a voice to the materiality of technology with which we surround ourselves. This project aims to develop another view on our technological visions of the future by researching early electronic technologies of simulation and control. Analog electronics is especially interesting since it bridges matter and model, and marks the beginning of the miniaturisation and dematerialization of our devices. By going back to historical practices I want to develop a fresh approach to working with matter on a molecular scale, an approach that is based on analogy and dialogue between physical systems instead of on notions such as the programming of smart materials.” 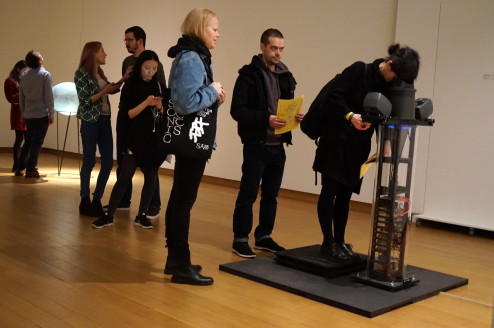 The installation comes from the meeting of two processes: one being my investigations into analog computing and simulation of the past few years, the other being an invitation to participate in a collaborative project between KASK, Ghent University (UGent) and Art@CMS on the occasion of the 2019 European Physical Society Conference on High Energy Physics that will take place in Ghent.
Last year, as part of the preparations for that collaboration, I had the privilege to visit CERN together with a group of artists and researchers from KASK. Visiting CERN was incredibly stimulating: I don’t think I have ever visited a place with such a density of ideas in so many and such extreme materializations. It is also very refreshing to re-realize that the most productive research and technological invention takes place at sites like this, far removed from commercial pressures.
The original plan for a project was to find a motive among the many strands of research taking place at CERN that would serve as my entry point. I was looking for something that would enable me to engage with some of the science and make images by misusing scientific devices and procedures for my own ends, something I have done in many of my previous projects. After finding some very interesting leads initially, I realized after a while that any meaningful engagement with particle physics would demand an investment of several years to understand more of the science. Without this, I had the feeling that I would remain dependent on the metaphors that are used by the scientists at CERN to explain their work to a general audience, instead of being able to formulate my own.
This realization brought me back to the answer given at the first meeting by art@cms director Micheal Hoch when I asked him if they didn’t have any table-top particle accelerators I could actually work with; he pointed out to me that the cathode ray tube is a table-top particle accelerator. At the time I thought that was a disappointing answer, but that didn’t make it less true and fruitful in the end. 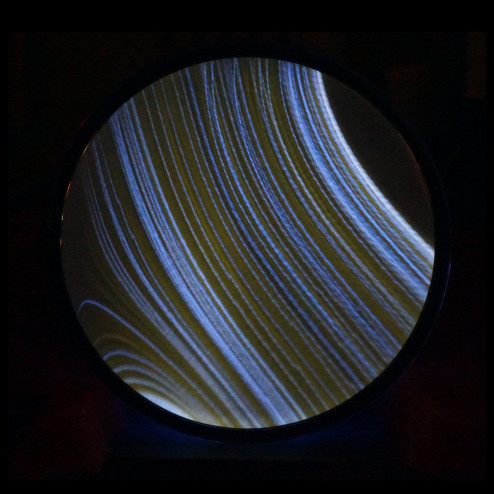 The other source for this project is my research into analog computing and electronic simulation. This started out with a vision of generating HD video images through analog computing, something that I am still working on, using the very high-bandwidth analog computer that I gradually built over past two years. But those experiments also made me curious to think about other ways to visualize signals, vector graphics being the obvious alternative.
If you are interested in exploring the history of electronics through working with the actual devices, one aspect of this history becomes very concrete: almost all development of electronics and computers has its roots in the Second World War or the Cold War. Over the last few years I have acquired quite a few vintage measuring and signal generating equipment, and about a third of those were previously owned by some kind of military establishment. More than half my collection of analog computing books comes from military libraries. Also new spare parts for such devices can sometimes only be found through sellers specializing in military equipment, posing ethical problems of a kind I never expected to run into while making abstract images.
A fantastic book that put this phenomenon into its historical context for me is “The Closed World; Computers and the Politics of Discourse in Cold War America” by Paul N. Edwards. The development of electronics was enormously accelerated by the war effort to develop Radar, one of the two ‘big technology’ projects of the US during World War II, the other being the Manhattan Project. These technological war efforts did not stop when the World War ended; instead they only increased in magnitude during the Cold War and continue until this day. 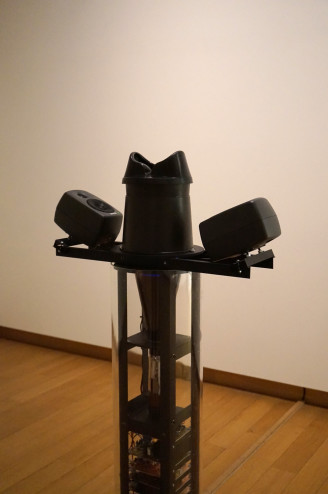 When thinking of ways to refer to this aspect of electronics history into my work, I became interested in working with radar tubes. Many radar tubes that were developed during the Second World War use a particular two-stage phosphor that has two colours: a bright blue colour that shows the current signal, and a very slow yellow glow that acts like a kind of memory of the display. In an airplane radar this would mean that the current position of a plane would be blue, with a yellow trail behind it showing its previous positions.
Since a lot of this radar technology is so old, it is well-documented and it is relatively straightforward to find examples of the high-voltage circuitry that is necessary to use these tubes. New to this type of electronics, I made a mistake when I bought the radar tubes that I wanted to use (new in the sense of being unused, but manufactured in 1964), which meant that I had to significantly revise the circuit. This process of revising brought me to the point where I realized that I could also build circuitry to dynamically control the focus, something that turns the radar tube from an X-Y vector display into a device that is more true to its origins in electron-optics.
The device I built consists of a tube that is mounted into a transparent pillar containing 11 hand-crafted circuit boards with the power supplies, the chaotic signal generators and drivers for the radar tube and the two loudspeakers. 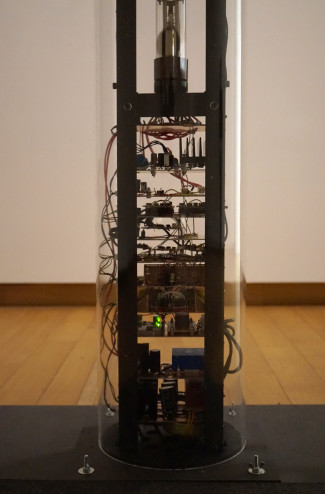 The next exhibition that is planned will be from the 10th to the 17th of July in the IIC Convention Center in Ghent, the site of the EPS-HEP Conference.