artist, computer and the radiant roots of raytracing

In 1976 Ruth Leavitt edited a small book called “Artist and Computer”, and under one of the most scary cover pages on my bookshelves it holds a collection of 35 essays written by early computer artists, many of them already considered pioneers at the the time of writing. The book gives a fascinating insight into the spirit of those times; how certain preoccupations that seemed allimportant then seem to have just dissolved into thin air since and how certain things that still seem very much cutting edge now were already discussed by clever people thirty years ago. Also interesting is that many of the writers did not consider themselves artists necessarily; some of them describe just doing things they find are interesting, without worrying too much about what their place is. Some of the writers are actually scientists with only some degree of interest in art, freely mixed with very serious art people. 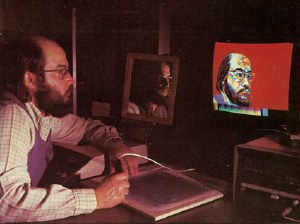 Among the artists included are several people which I would still consider (relatively) well-known, such as Kenneth Knowlton, John Whitney Sr., Lilian Schwarz (who all made their way into experimental animation history), Edward Ihnatowicz (who made the beautiful sensitive robot ‘The Senster’ and who has a great text in the book, in many ways related to the writings of Rodney Brooks twenty years later) and artists such as Peter Struycken (who is wellknown in Holland at least), Vera Molnar, Edward Zajec, Herbert Franke (who edited a great book called ‘Apparative Kunst’ in 1973) and last but not least the ever amazing Manfred Mohr. 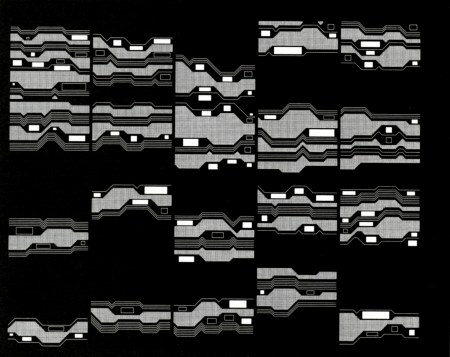 For me the book held several surprises, artists I had never heard about (which will tell you more about my knowledge than about the artists concerned). Three of them were: 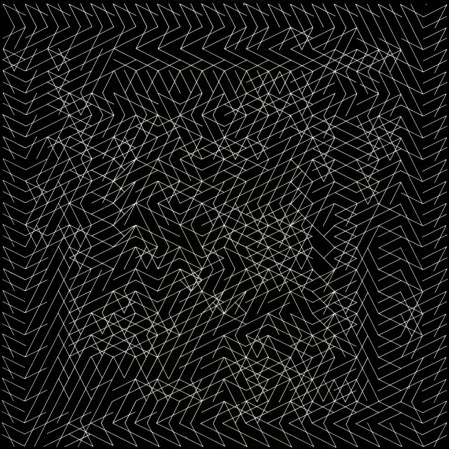 “HE7 gc/gf” by Jacques Palumbo

Jacques Palumbo; great modular designs, based on a generative system using characters from the alphabet, translated to variations of an image unit. 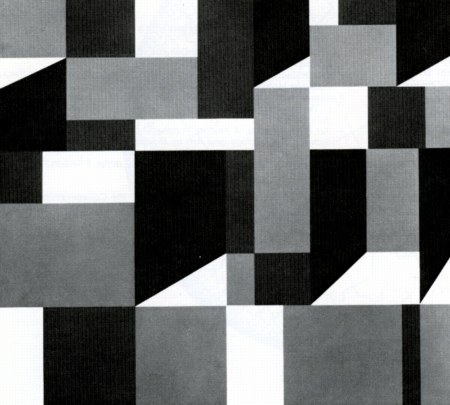 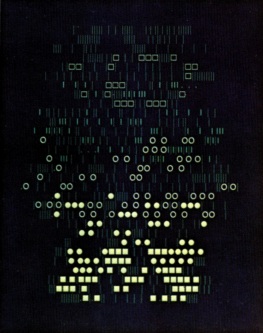 two views of “Cybernetic Landscape I” by Aaron Marcus

Aaron Marcus; an intriguing premonition of artificial reality, and graphically interesting work too..

A surprise of a different order was an article written by Larry Elin, describing some very early precursor to raytracing, I quote from the beginning:

“It is not at all an unusual phenomenon that, in the course of scientific inquiry, one discovery begets another and subsequent breakthroughs produce an unintended chain of pleasant surprises. So it was that physicists studying the effects of radiation on domestic and military structures developed an exciting and unique method for producing computer generated animation.
[ … ]
Scientists at Mathematical Applications Group, Inc., Computer Visuals parent company, were conducting experiments in which whole environments were mathematically described to a computer (an IBM 360/65). These mathematical models were then ‘exposed’ to a hypothetical dose of radiation. The program then in use diagnosed the effects of the radiation on the objects in the environment—how much reflected off, detracted within or penetrated. Although neither the environment nor the radiation existed, the findings were accurate and applicable to real life.” 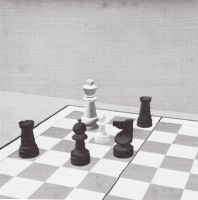 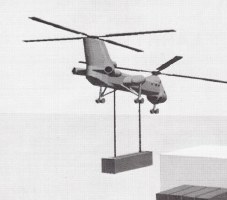 chess and military helicopters as an allegory of the future ?

Apparently the virtual light we are so used to now was from nuclear origin, and part of war preparations to begin with.

AtariArchives has done a great job putting this whole book online, with the pictures unfortunately in a not so great quality; you get the idea, but not the experience.
A hardcopy is neither hard to find nor very expensive. (see for example here )