Towards the end of 2003 I collaborated for the first time with Emio Greco and Pieter Scholten. The occasion was the performance by the Nederlands Dans Theater (NDT1) of “Double Points: Two” as part of the Moving Boundaries programme in 2003. It was the first production that Emio Greco | PC has ever rehearsed for the repertoire of another dance company.

I made two projections that accompanied the two dancers. Pictures below, and also an excerpt form the project proposal I wrote at the time. In this form “Double Points: Two” was performed 13 times in various theatres in Holland. 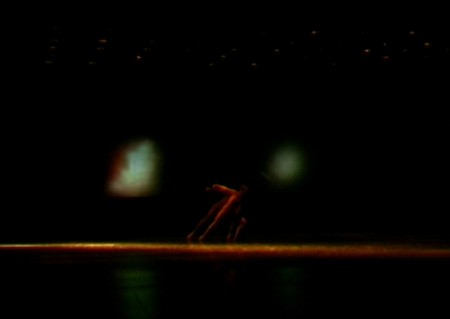 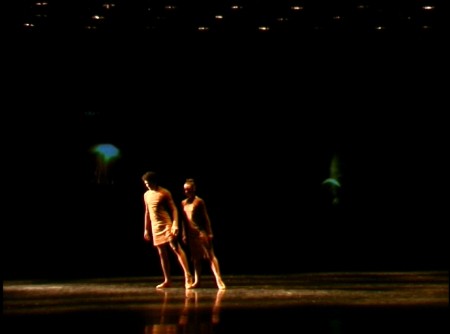 ”
The images for Double Point Two will be made using a variety of optical techniques and can be looked at in at least two ways. On the one hand they can be seen as a purely plastic composition of light in time, as a ‘music for the eye’, on the other hand as a kind of visualization of the inner processes of the two dancers, a view on the body from the inside. They are inspired by what could be ‘corporeal imagery’; the images you see when looking at the sun through almost closed eyelids, when pressing your eyeballs, or the flashes your visual system generates in a state of fatigue. This human visual noise is an optical phenomenon everybody is intimately familiar with, since these kinds of images arise at the core of our visual experience. At the same time these images go largely unnoticed, since they serve no function in daily life and are thus filtered out as noise.
The images will be shown in the form of two video projections, about two meters wide, side by side at the back of the stage area used in the choreography. They should be projected in such a way that their appearance during the piece is unannounced by the presence of empty screens. The projections should appear out of complete black and should be allowed to hover on the edge of perceptibility for a couple of minutes, leaving the audience in doubt about the nature of what they are seeing.
The development in time of the projections follows the overall dynamic development of the choreography, while remaining independent as an extra rhythmic layer. Certain key moments are synchronized, but on a smaller time-scale the rhythms are never literally the same. Also amongst themselves the two projections share their overall composition in time, synchronized at key moments, while never being copies. Micro-dialogues and micro-counterpoint between the two images will be generated by their dissimilarities in rhythm.
In this way the connection between the two projections mirrors the connection between the two dancers.