from september 28 to october 8, 2006 my installation #41 was shown in the Centraal Museum in Utrecht, as part of the ‘Re:visie’-programme, itself part of the Dutch Film Festival. Installation #41 consists of a green laserprojection of clusters of points on the black walls of a small dark space. This installation is in many ways the product of my activities during the preparation of ‘Hell’, a production by EG | PC.

The installation is hard to convey in a photograph, but here is one, i’ll put a simulation of the laserprojection online sometime soon: 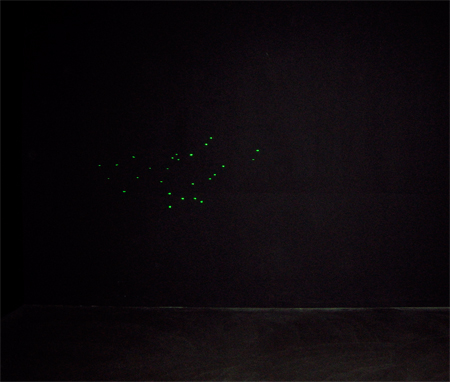 The year 2000 is six years ago and things that once were ‘science fiction’ have become ‘science’. People are capable of designing materials with properties that seem implausible in a world where the human contribution still mainly consists of wood, stone, steel and glass. Materials with high tensile strength, low weight, materials that emit light and materials with the ability to transform. This gives rise to a new concept of materiality in which matter is no longer necessarily heavy and passive, but light, active and perhaps eventually even a composed form of life. What used to be rigid attains a mobility that so far was reserved to light shows like firework, shadow theatre, the camera obscura and the moving image. Of old, light has had a place somewhere between the pure thought and the material world, which interrelates it with religious and utopian ideas, in which unfortunately the physical human being was always doomed to lag behind. The prospect of ‘illuminated’ forms of matter induces fantasies of worlds that will also once be inhabitable at this side of the horizon.

Installation #41 is based on a version of what could be called ‘artificial crystallography’: a simulated universe with a variable number of dimensions, which is inhabited by autonomous particles that, through mutual interactions, organise themselves into ever changing constellations.