Some fragments on early devices that visualize sound-waves. I wrote about some of these in my short survey “Symmetry and Harmonics“, but there are many more. In the end most of these devices seem to be inspired by Chladni’s experiments producing sand patterns on vibrating plates. I don’t know whether the ‘Tonoscope’ of Hans Jenny was an independent discovery or whether it was directly inspired by the ‘Eidophone’ of Margaret Watts-Hughes; the similarities are very striking indeed, such as the use of lycopodium (fine pollen) and the religious overtones in the writing. 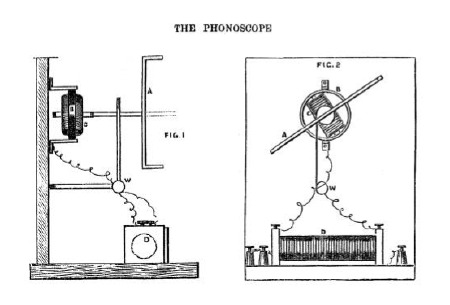 “The effect of speech upon the instrument is remarkable. The wave motion produced by sound is well known to be one of condensation and rarefaction. It would seem, therefore, that the alternate condensation and rarefaction of the sound wave acting on the diaphragm cause the make and break of contact, and hence the flash in the vacuum tube. Now the wave length – that is the distance between two successive points of condensation or rarefaction – differs with each sound or note, and so each note produces its own particular star. Two notes in harmony produce two superimposed stars, the one bright and comparatively distinct, the other more nebulous and not so bright. Just as in acoustics we finds (sic) two sounds may produce silence, and in the study of light, that two lights may produce darkness, so we find interference admirably shown by this instrument, for two discordant notes break up all harmony of star rays, and we obtain nebulous haze with occasional flashes of light.” 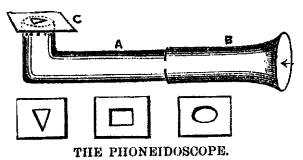 from the same article, but now on the Phoneidoscope:

“The second instrument is the phoneidoscope. The P’s seem to be having it all their own way in scientific nomenclature, and future dictionary makers will have some difficulty in finding definitions for all these lengthy words. Mr. Sedley Taylor has added another to the list, but as it is the name of a very simple piece of apparatus, which shows some interesting and beautiful figures, we are bound to forgive him. Sonorous vibrations – thanks to Professor D. E. Hughes – is a term almost as well understood as apple pie, and Mr. Taylor has been experimenting upon the action of sonorous vibrations on liquid films. The following diagram will explain the simple apparatus required for these investigations. A is a bent tube of about 1 in. in diameter; an angle of gas tubing will do very well. B is an elastic tube with a mouth-piece. One limb of the tube A is horizontal, the other vertical. Upon the top of the vertical arm is placed a thin disc, out of which a piece has been cut. The opening thus made is filled with a film of soap solution. We have all blown soap bubbles in our boyish or girlish days, so it is not necessary to explain how this film is obtained, and we all know the beautiful colour changes shown by the bubble as its thickness diminished in the sunshine. Having then obtained a film of soap solution it is watched till it becomes thin enough to exhibit these well-known colour changes, and then the experiment may proceed. Laying the disc containing the film over the vertical opening, and speaking gently into the mouth-piece, the colours, instead of ever changing, immediately form well-defined patterns somewhat similar to the Chladni figures so admirably described and illustrated by Tyndall, in his work on “Sound,” 2nd edition, p.143. Upon varying the note the figures rapidly change, each note having its own special pattern. For varying the pattern, differently shaped orifices for holding the films are used, some triangular, some circular, some elliptical, &c., it being found that the form of orifice – as in the case of Chladni’s plates – influences the pattern when the vibrating surface is under the influence of the sonorous vibration. It must be remembered when speaking of all these discoveries that their tendency is to bring us nearer and nearer to that grand discovery which is sooner or later to be made, and which when made will show us the fundamental laws which regulate motion. ”

“THE PHONEIDOSCOPE—An instrument with the above name was presented to the Societé Francaise de Physique at one of its late sittings, by the inventor, M. Taylor. Its object is to show, optically, the delicate particularities of sonorous vibratory movement. A thin film of liquid glycerin is formed like a soap-bubble film on a small opening made in a piece of blackened brass, and it reflects the light of a lamp in producing, either on the retina direct or by projection on a screen, the well-known iridescent effects of thin transparent plates. As long as the film is motionless the simple colors of iridescence are alone visible. But if, by means of a bent tube, the vibrations of a sustained sound are conducted underneath that film, by the voice or otherwise, the film begins to vibrate and the colors are distributed geometrically, producing on the surface fixed bands and moving rings, the disposition of which varies with the depth of the tone and the nature of the harmony accompanying it—that is to say, the pitch. M. Taylor showed, by projection, that the acoustic figures thus obtained become more and more complicated as the tone emitted rises, or when, the light remaining constant, different vowels are pronounced. The colors thrown on the screen differed during the experiment in proportion as the film became thinner by evaporation, but the acoustic figures did not vary.
The results obtained are extremely varied and of curious appearance, according as apertures of different forms are used. M. Taylor projected the phenomena produced by triangular, square and round, by means of the Drummond light. The considerable heat that accompanies that process of lighting, causes, after a certain time, the evaporation of the film of glycerin, and terminates the experiment. But its duration may be augmented by passing the luminous rays through a glass flask filled with water, which deprives them of the greater portion of the qualities absorbable by the liquid glycerin.
We think that it would also be easy to protect the film by enclosing it in a bottle in which the air is kept saturated with watery vapor, as is done when repeating Newton’s experiments with soap-bubbles.”

“COLORS MADE BY THE HUMAN VOICE.

An optical demonstration of the effect of sound on the colors and figures in soap bubbles was given at the Franklin institute last night by Prof. Holeman. A film of soap was placed across the end of a phoneidoscope.
To bring the sound in direct contact with the soap a tube was used. A reflection of the film was thrown on a canvas screen, where it first assumed a blueish gray appearance. An intonation of the voice, with the lips close to the mouth of the tube, caused a number of black spots to appear on the reflection.
When these passed away a beautiful light green, intermingled with pink, remained. These two appeared to be the principal colors caused by sound. It was noticeable, however, that while a certain tone would cause the same figure to reappear, it had no control over the color. Alone which, for instance, caused one solid color lo appear, would bring out, perhaps, a dark blue at one time and a yellow at another. No difference was noticeable in the effect of the male and female voices.”

on the “Telephone Harp”, from “Journal of the Society of Telegraph Engineers”, Vol. VII, 1878.
(entire article via Mike Penney)

“Having thus obtained clearly audible sounds which did not, at the least, offend the ear, it occurred to me, in January of the present year, that these sounds might also be rendered visible in the form of their equivalent electric currents. With the aid of Mr. Watson, whose ingenuity is unfailing, this idea was put into practicable form, and I shall endeavour to show it as my last experiment this evening. In this, we proceed upon the theory that the vibration of the diaphragm is membranous – from the centre in and out – just as, in the attempt to dampen the vibration we seemed to show that it could only be molecular. In circuit with the other receiving telephones, and only far enough away to avoid offending our ears with its jangling, is a form of box telephone, in which a double-pole magnet and coils impart to an iron disc of the usual form such amplitude of vibration that the movement of its central part opens and closes a galvanic circuit, of which the whole disc forms a portion. This circuit is joined to the primary wire of a Ruhmkoff coil, which you see upon the table, and whose secondary circuit is made through a vacuum tube.

We will now have the room darkened, the musician will begin to play upon the harp, and you will both see and hear the effect. The currents passing through the telephones produce audible sounds. The same currents, considered with respect to the relay, or interrupting telephone, produce also the rhythmic interruptions in an auxiliary circuit which the vacuum tube converts into light. The effect in the tubes is not strictly constant to the audible sound, because the consumption of the platinum at the points of contact makes it well-nigh impossible to maintain that close adjustment which so very slight an interruption of the primary circuit requires, but the response is sufficiently accurate to show, as I think, that the telephonic disc has a distinctly membranous vibration.”

and to finish some pictures from “Visible Sound”, by Margaret Watts-Hughes, in “The Century Magazine”, Vol. XLII, May 1891. (online at Cornell University): 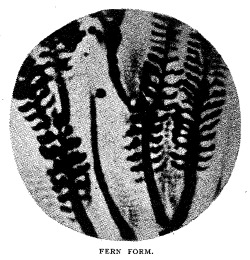 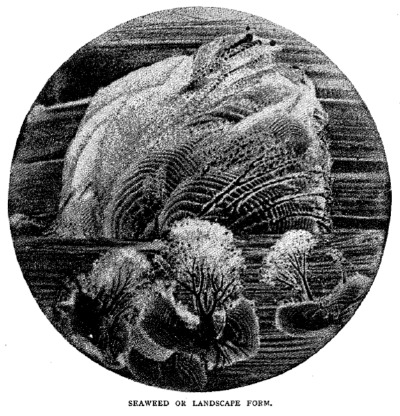 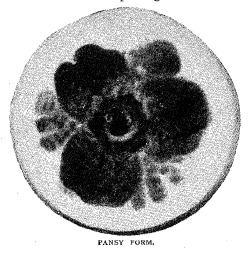 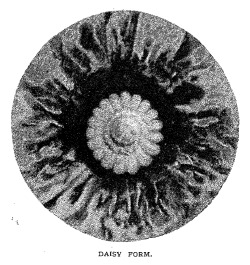