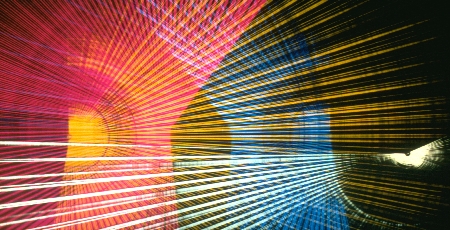 “#11 (Marey <-> Moiré) is a film in which all images were generated by intermittently recording the movement of a line. It is a film about the discontinuity that lies at the heart of the film medium.

The idea for this film came from two separate developments:

After making films #3 and #5 I was thinking about other methods to generate images by distributing light across filmframes in perverted ways. One idea that came to mind was to record a continuous movement with long exposures like I had been doing before, but to interrupt these exposures many times to generate visual patterns. This would create interesting interferences between the motions involved.

The other development was my increasing interest in the technological history of film. I had been looking for a kind of ‘pure’ film: images the film apparatus would come up with if left alone, as it were. While thinking about ‘pure’ film I started to look towards the historic origins of film and new media in general. Besides #11 this led to experiments I did with various mechanical installations using nipkow discs or anorthoscopes.
These two developments came together in the principle I used to make #11. In order to make the film I constructed a machine with the help of which I was able control three movements:
– the movement of the film in the camera
– the rotation of a shutter in front of the lightsource
– the movement of a line in front of the camera
The interferences possible between these three motions are the material I used to compose #11. For every section of the film I recorded a set of high contrast black and white originals which I used in the optical printer to create interference images in colour.
The principle on which my machine is based, is the same as used by the French scientist Etienne-Jules Marey. He was interested in studying the motions of animals and humans and invented many technical means to be able to record these movements. Amongst his inventions are the cardiograph and the wind-tunnel and also various chronophotographic methods which are considered to be direct forerunners of cinema.
To me however, Marey is an exponent of a development which is much more significant than the invention of cinema or the influence he also had on cubist painting. His work marks a definite turn in the strategies to deal with processes, motions and flux. What Marey did was to invent many ways to have natural movements record itself, and to analyze this notation rather than having to watch and interpret processes in real-time. Especially his use of chronophotography shows very clearly the power of dividing motion in successive phases. Time is converted into graphic space, interfering with the graphic space inherited from traditional perspective. It is this same combination of the isolation of phases in time and of the conversion of time in graphic space, that led to many other powerful inventions, such as the assembly line. The French philosopher Henri Bergson compared these principles to the very way the human problem-solving mind works: our mind can only think in discrete concepts and flux is always seen as a transition between fixed states. 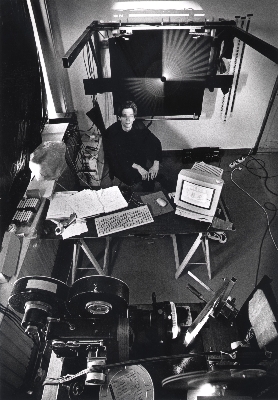 #11 was made possible through a generous grant of the Dutch Film Fund.” 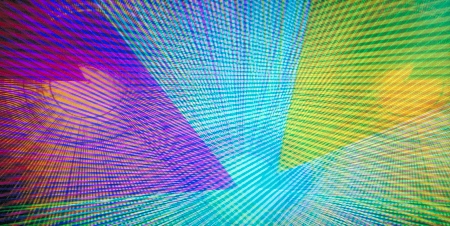 #11, Marey <-> Moiré premiered at the Rotterdam International Film Festival in 2000. It won the Gand prix for non-narrative animation at the Holland Animation festival in Utrecht in 2000. Also I’ve been told it was the first ever dutch film to be shown at Sundance (also in 2000).