”
#2 is a film in three parts with an electronic soundtrack. The first part consists of textures that were derived from images of nature, the second part consists of pure light and the third attempts to be a synthesis of the preceding two in the form of a time-lapse shot of the sky during sunrise.

In the first place #2 is an early attempt to develop a form of composition of light in time, comparable to the way sound is structured in a musical piece. In this I was very much influenced by the traditions of light-art and abstract film, which I admire greatly.
Secondly #2 was inspired by the colourchanges of daylight in the course of the day. The changes in the colour of daylight influence our mood greatly. Also the colour symbolisms in many religions are based on colours that stand for sunrise or sunset.
Thirdly this film is a very romantic story of evolution.

The images of #2 were made in the filmlaboratory of Studio Eén, at the time situated in Arnhem. There I was able to work on a super-8 contactprinter which allowed me to layer and transform my filmed originals, in order to make coloured moving textures. The sound was made in the Studios for Electronic Music of the Royal Conservatory in The Hague.
” 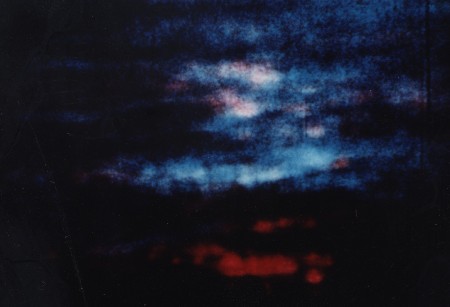