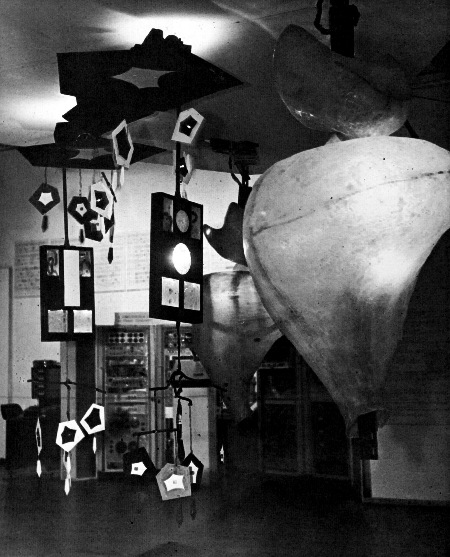 While leafing through the “Cybernetic Serendipity” catalogue busy looking for something else, I was struck by this description of the installation by Gordon Pask, called “The Colloquy of Mobiles”. Gordon Pask is amazing, and I didn’t realize he was in that 1968 exhibition. The installation consists of five ‘individuals’, two ‘male’ and three ‘female’, communicating through light and sound signals. They apparently learn about eachother through communication and their communications can be interfered with by the viewer. His own description of the piece doesn’t seem to be available on-line, so here it is, with some pictures from MedienKunstNetz:

“An ‘aesthetically potent’ environment is an environment of any sort (auditory, as in music, verbal, visual, tactile perhaps) that people are liable to enjoy and which serves to shape their enjoyment. An artist can certainly manufacture and mould such an environment (as he does by writing music, building a house or painting a picture), and, in so doing, he may communicate a message. But the quality of ‘aesthetic potency’, although it determines the framework in which artistic communication can take place, is primarily attached to a relation between the environment and the hearer or the viewer. An aesthetically potent environment encourages the hearer of viewer to explore it, to learn about it, to form a hierarchy of concepts that refer to it; further it guides his exploration; in a sense, it makes him participate in, or at any rate see himself reflected in, the environment.
Physically (though not psychologically) passive environments of this sort are familiar enough (music that bears repetition, paintings worth seeing twice). Active and even reactive environments have been fabricated with this property. The colloquy of mobiles is an attempt to go one step further in the same direction.
It is a group of objects, the individual mobiles, that engage in discourse, that compete, co-operate and learn about one another. Their discourse evolves at several levels in a hierarchy of control and a hierarchy of abstraction. The trick is that if you find them interesting then you can join in the discourse as well and bring your influence to bear by participating in what goes on. It is a crude demonstration of an idea that could be developed indefinitely.
Each individual mobile has a set of programmes that determine its motions and its visible state. Each individual learns how to deploy its programmes in order to achieve a goal; namely, to reduce an inbuilt drive. Its level of ‘satisfaction’ is reflected partly in its behaviour and partly in a visual display. The mobiles are of two sorts. As a whimsy, we have called one sort male, the other female.
Whereas males compete amongst themselves and so do females, a male may cooperate with a female and vice-versa, for one possesses programmes that are not in the repertoire of the other and jointly a male and female pair can achieve more than both individuals in isolation. Ironically, this property is manifest in the fact that a male can project strong beams of light but it cannot satisfy an urge to have them play on its periphery, whereas a female (who cannot shine light) is able to reflect it back to a male (and, when she is competent, to reflect it upon the right position). To co-operate or even to orient themselves and to engage their programmes, the mobiles must communicate. They do so in a simple but many-levelled language of light flashes and sounds. You may engage in this discourse if you wish to, though your goals may be alien to the goals of the mobiles; for example, you might be trying to achieve a configuration that you regard as pleasing.” 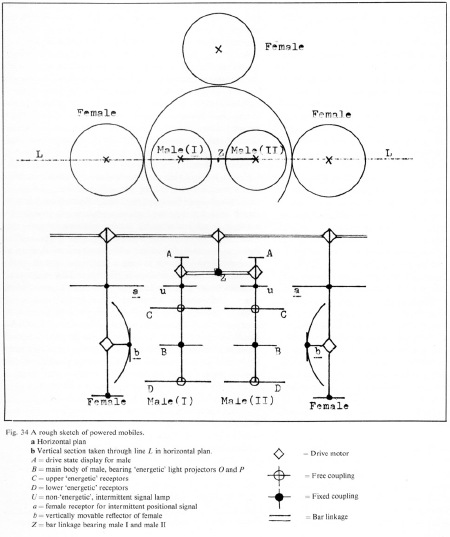 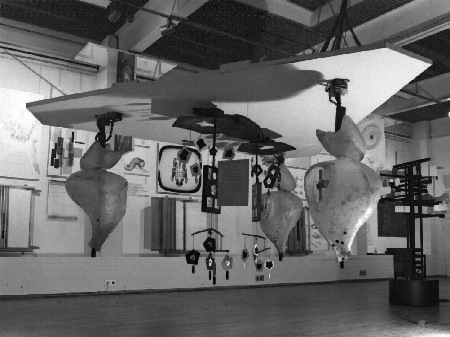 another exhibition view, note ‘Cysp I‘ by Nicolas Schöffer on the right.