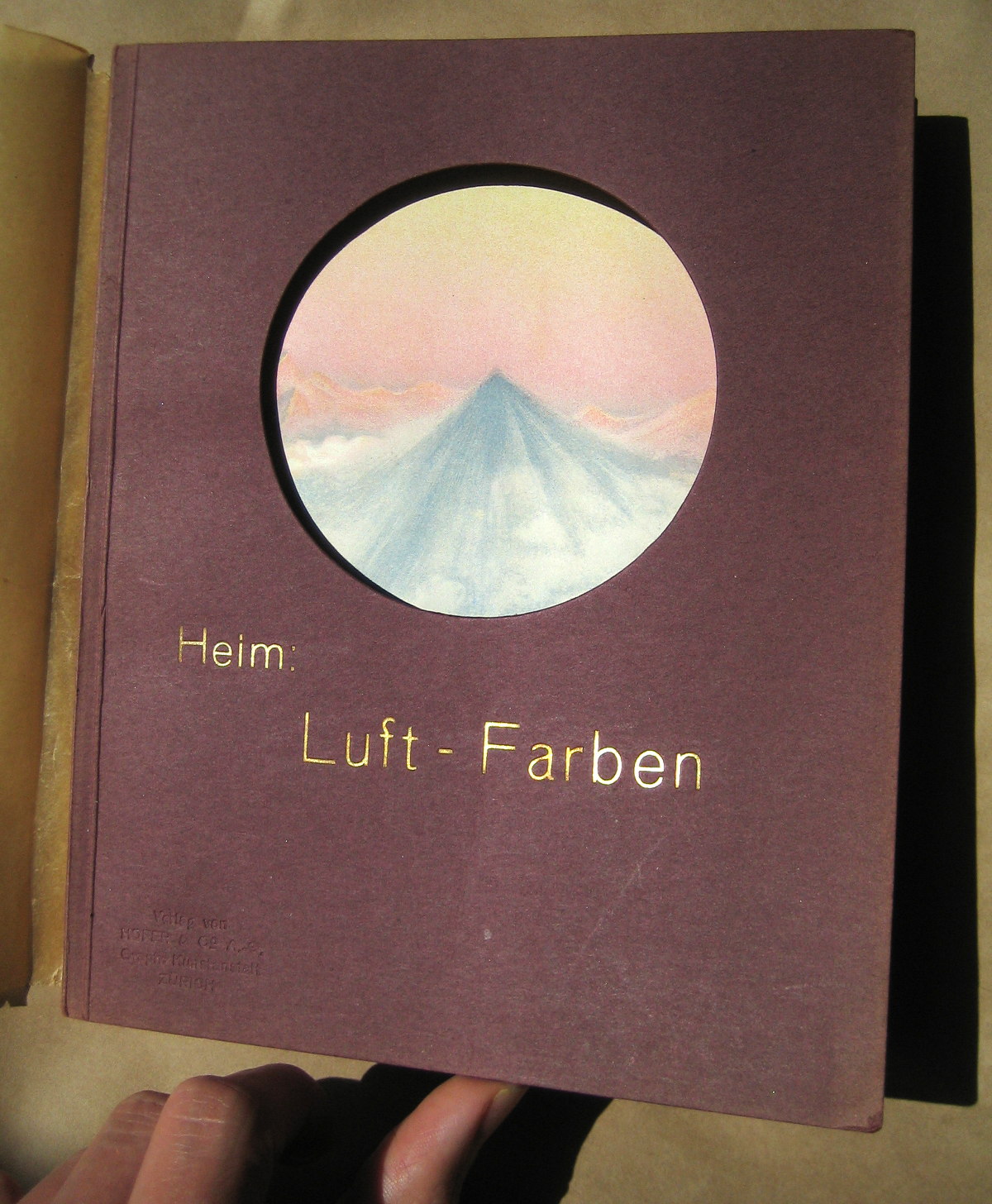 The most interesting books I have invariably come from messy bookstores, where known topics have random and unlikely neighbours, for no reason other than life. In those places, you can find what you were not looking for, which is generally more rewarding than buying a book that was already on your list (while sipping your latte). Some days ago, in such a messy and latte-less bookstore, and evidently completely out of the blue, I found a very pretty little book indeed; “Luft-Farben”, a short monograph about the colours of the sky, published in Zurich in 1912. The author is Albert Heim, a Swiss geologist who admits he is no expert in the subject, but developed an interest for it through his fieldwork in the mountains, and decided to write this book as a way to make some of the specialist knowledge in the field more accessible.
The book has a series of colour plates that Heim painted himself and that were ‘reproduced using the photomechanical Frey-method’. The century-old printerd colours still have a beautiful quality, which is why I post all the colour images from the book below. Please make sure to click on the images to see a higher-res version ! 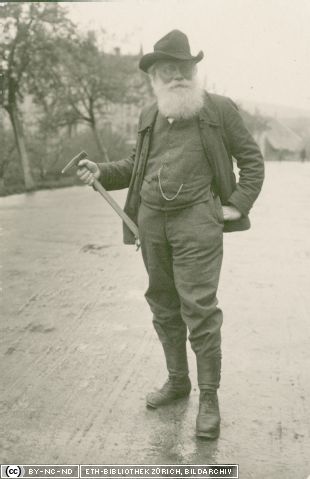 In the text of the book Albert Heim explains many things that are still not widely known (or at least new to me), quoting most of his sources and claiming one phenomenon as his own discovery. For instance he explains the blue colour of the sky, caused by scattering of the light from the sun, in a detailed comparison to how light travels through water that is not completely pure. He talks about the changes in ratio between direct sunlight and light scattered in the air. Also he talks about how the shadow of the earth travels through the atmosphere and how that relates to the various phases in dusk and dawn (see figs 7-19 below). And he complains about pollution, which to a modern urban person seems rather astonishing for 1912 Switzerland (see also fig. 15):

“It is an overwhelmingly painful experience to me, that the competely undisturbed progression of all phenomena at dusk is become more and more rare in our country. Because of our industry and our more intensive activity (road dust, cars, train smoke, chimney smoke, human bustle, etc.), the excessive impurities of the air have strongly increased, and cause irregular disturbances. Beautiful sunsets, beautiful Alpine glow and clean and pure blue skies have nowadays become a much more rare sight in our densely populated valleys than 30 or 40 years ago. Out of the city and into the mountains, those who still want to enjoy pure air colours in the landscape !” 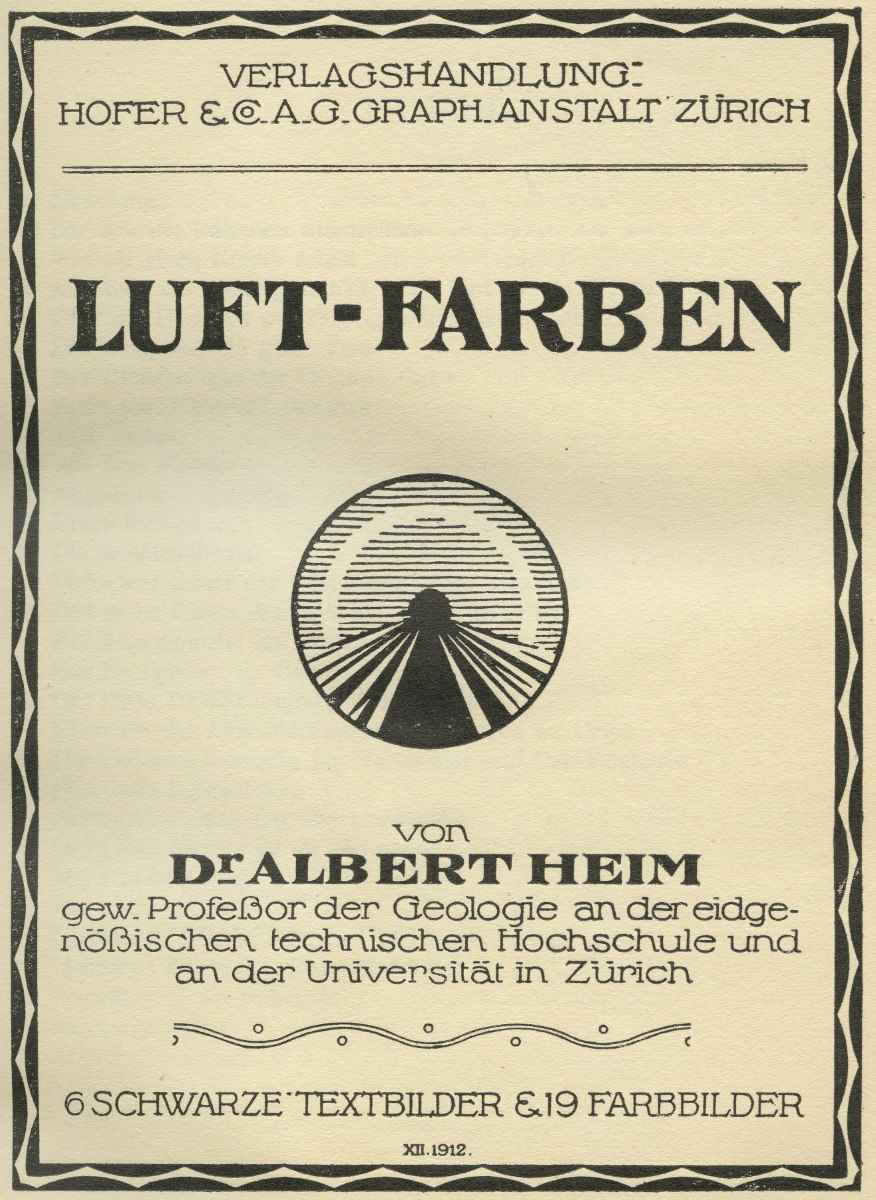 What makes the book interesting and lively is that Albert Heim talks a lot from his own observations during field work or as an amateur painter, with practical and sometimes surprising advice:

“Sensitivity for colour is different for everybody. A simple means can work amazingly well to let us feel the colours in the landscape extremely clearly: we bend down and turn our heads as much as possible downwards – or even we turn our backs to the landscape, bend over forward as deep as possible and we look from in between our legs. The fine nuances of colour, the soft blue, the blue sky, the distance of the heavens behind the mountains, all find their expression in a wonderful beauty and gorgeous bouquet of colours.”

He also speaks from experience when he makes these remarks that look very unlikely at first sight:

“The air envelops the landscape with a wonderful opalizing haze of colour. Without it, light and shadow would collide as cold and hard and glaring as on the moon.”

This is an interesting thing to say in 1912, almost fifty years before the first moonlanding, but later in the book it turns out that this is based on his own observations high in the mountains (see fig. 5) and especially in high-altitude balloon trips. He talks about being in a balloon at 6000 meter and how at that altitude all shadows are black as night because the light scattering of the atmosphere is much reduced. Probably out of modesty and because of the fact that most readers at that time would have known, he does not mention that in 1898 he was the initiator of the first high-altitude balloon flight accross the Alps, together with balloonist Eduard Schweizer / Spelterini, aboard the ‘Wega’, see the picture just before take-off below. Shortly afterwards, he published a book with his personal account of this pioneering trip, geological observations and pictures, including a short chapter on colours and clouds. (picture taken from “Die Luftschifffahrt der Gegenwart“, by Hauptmann Hermann Hoernes, published by A.Hartleben, Vienna/Pest/Leipzig, 1903) 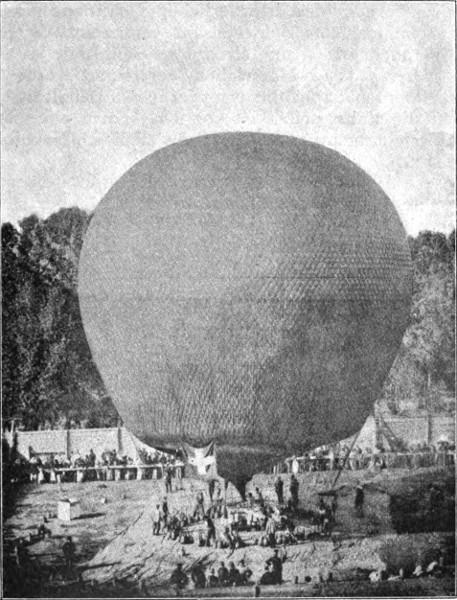 The “Wega” ready for departure on the 3rd of october 1898

When reading “Luft-Farben”, you get a sense of the air as a medium that is around us and that influences and partly causes the colours we perceive. Being from a flat country, I realize how different a perspective that is from looking at the coloured sky as something that is always “up there” or “out there” at the horizon. That difference in perspective is perhaps the strongest at the end of the book, when he talks about 360-degree rainbows one can see in fog and rain in the mountain, experiences most of us now tend to have in planes rather than on mountain tops.

I know little about whether this booklet had any influence on artists interested in light and colour, one would think it should have, but I am not aware of any artist who mentions it. Marcel Minnaert gives it as a main reference for the chapter on ‘Light and Colour of the Sky” in his classic “Light and Colour in the Outdoors”, and calls it a wonderful book with “uncomparably beautiful” illustrations. Since James Turrell cites Minnaert as one of his inspirations, I’d like to think that some of Heim’s observations live on in Turrell’s work. 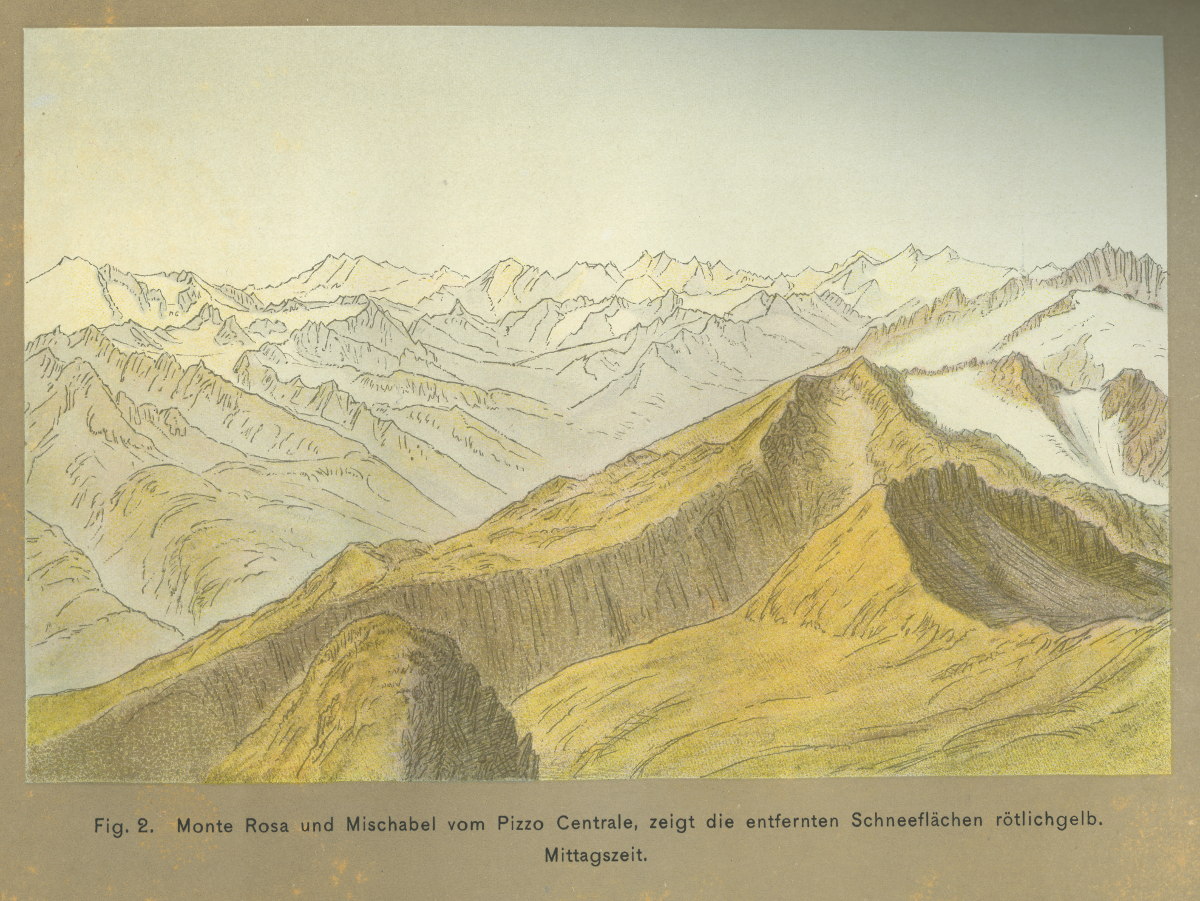 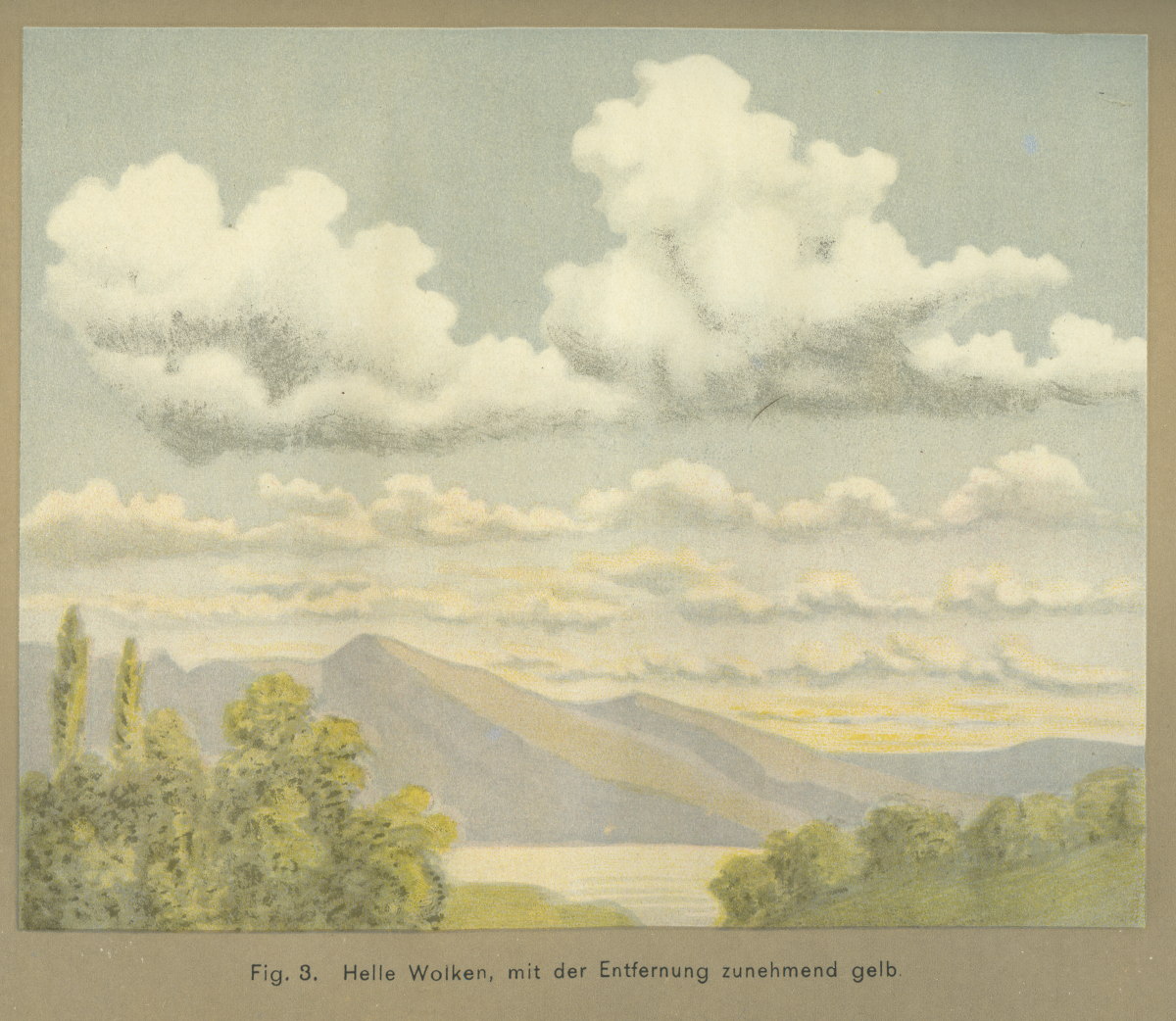 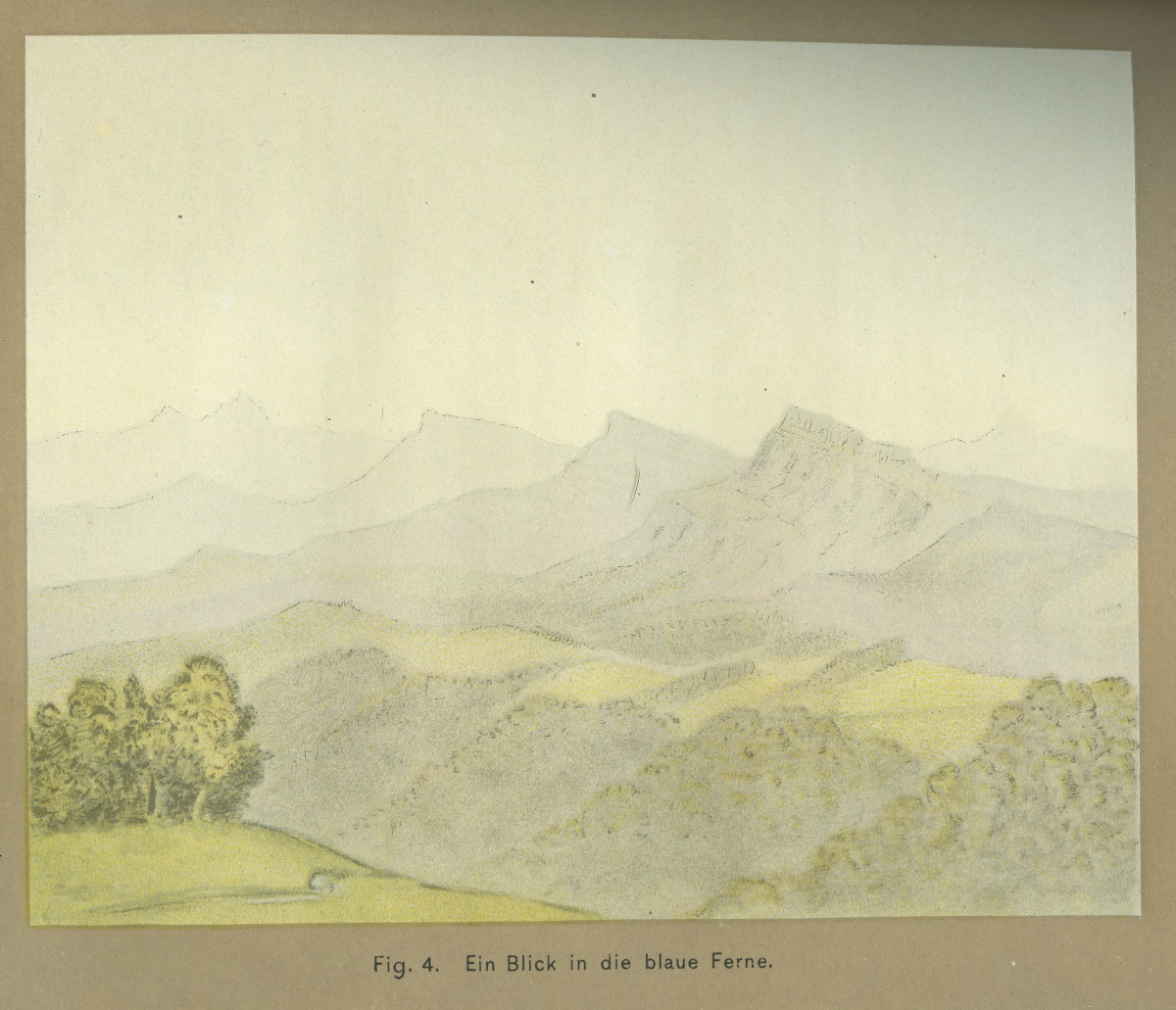 A view in the blue distance. 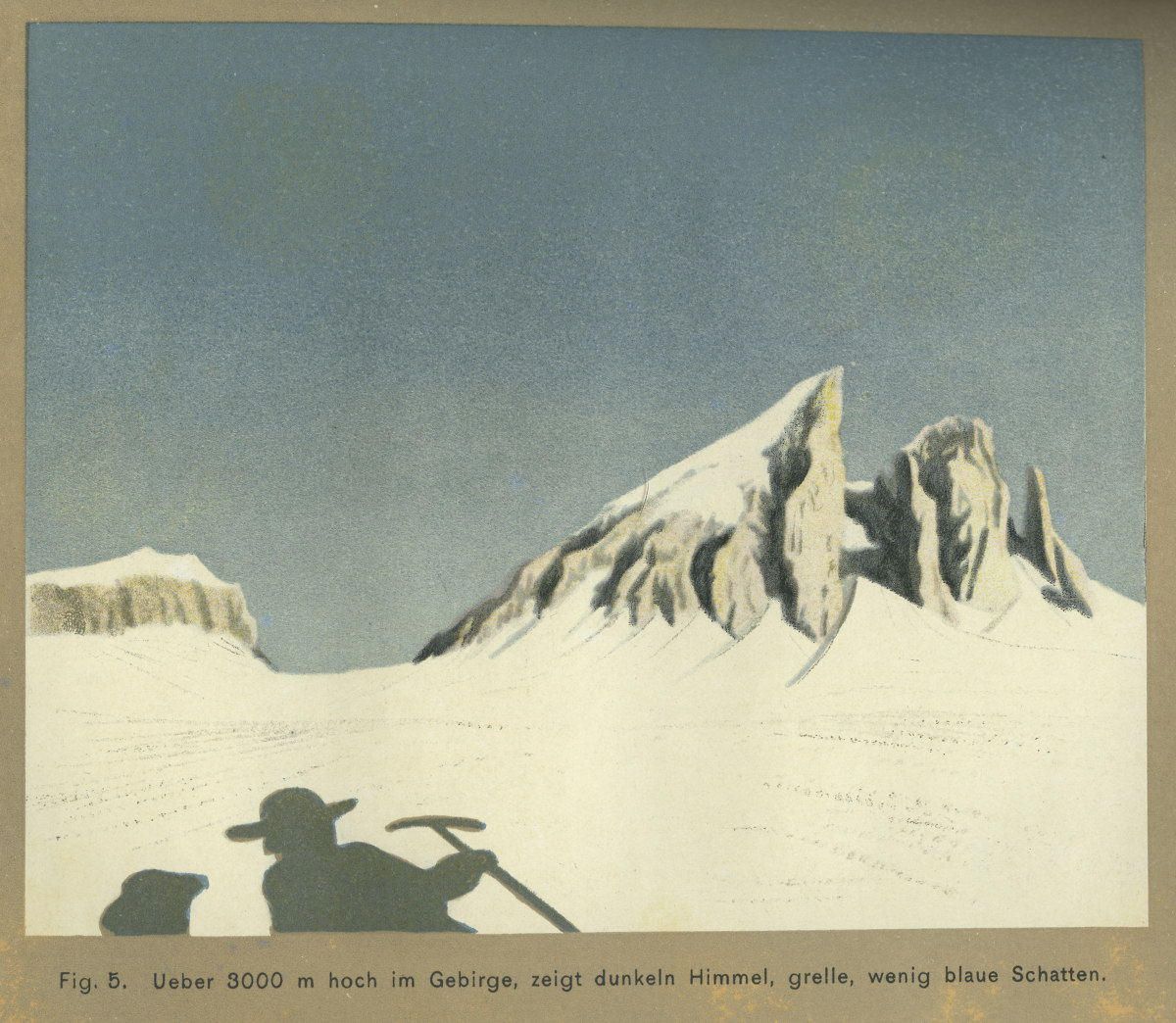 Above 3000m high in the mountains, shows dark sky and harsh shadows with little blue 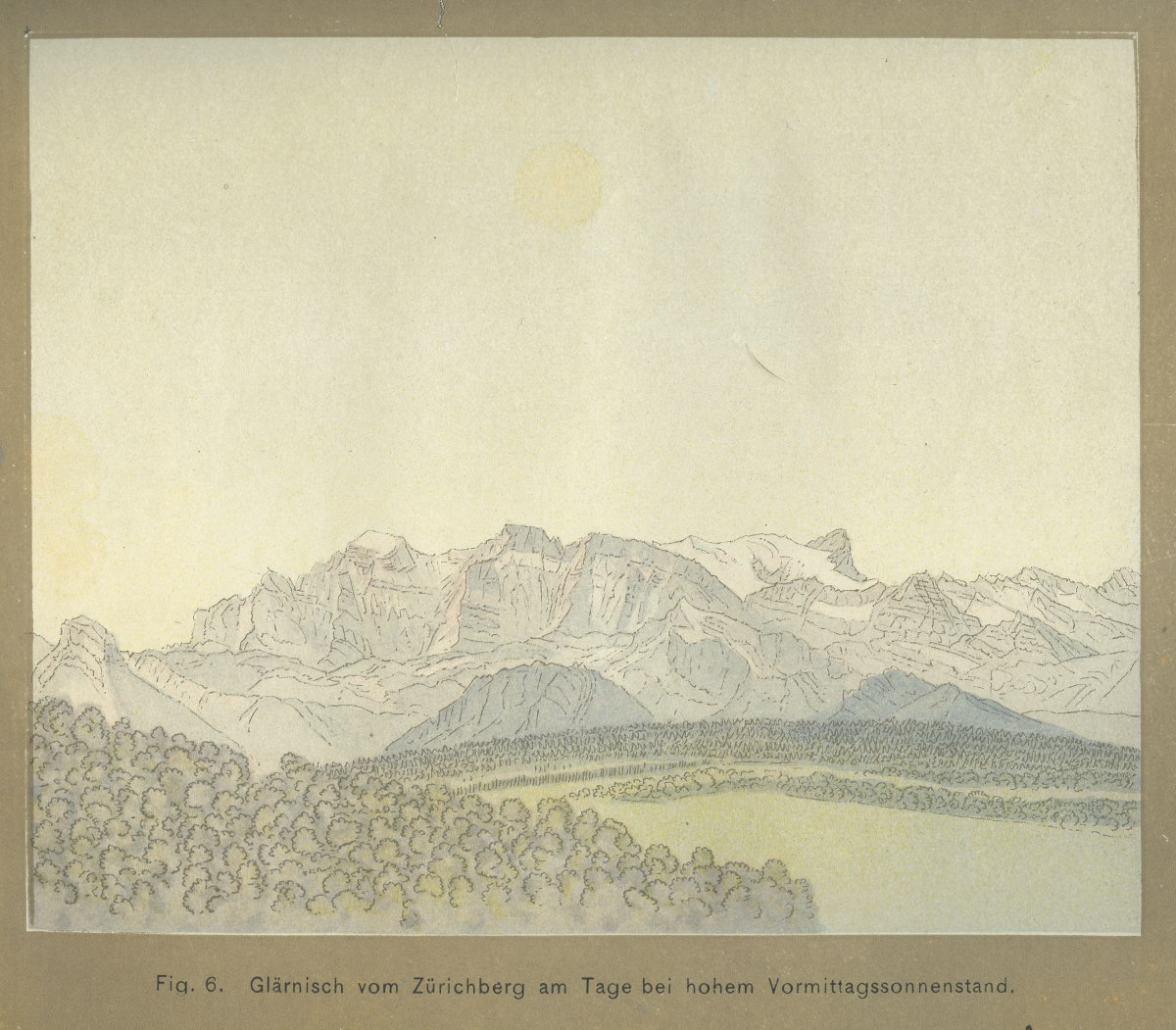 Glaernisch seen from Zuerichberg, during the day with high morning sun 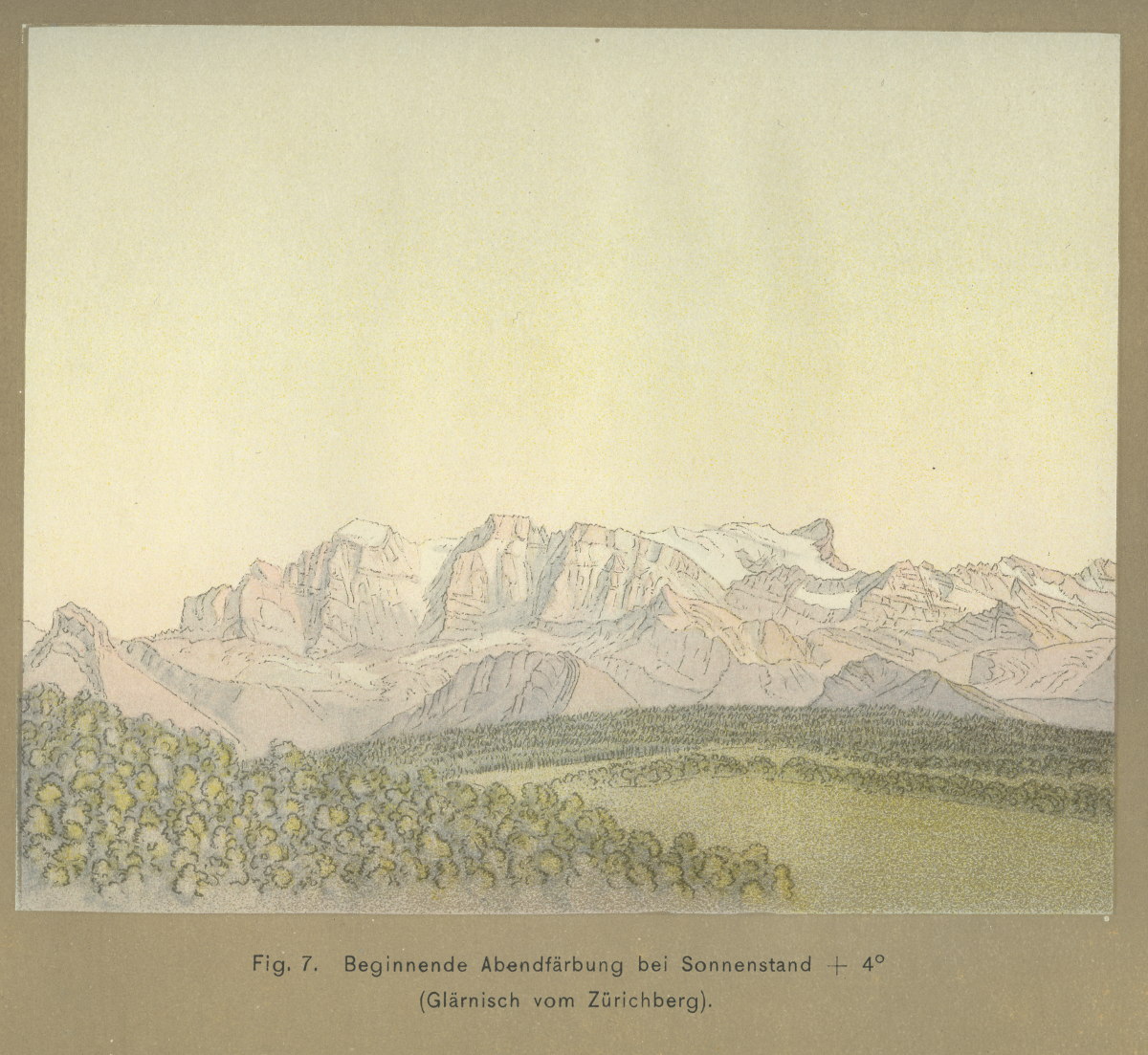 beginning evening colouring when the sun is at +4 degrees 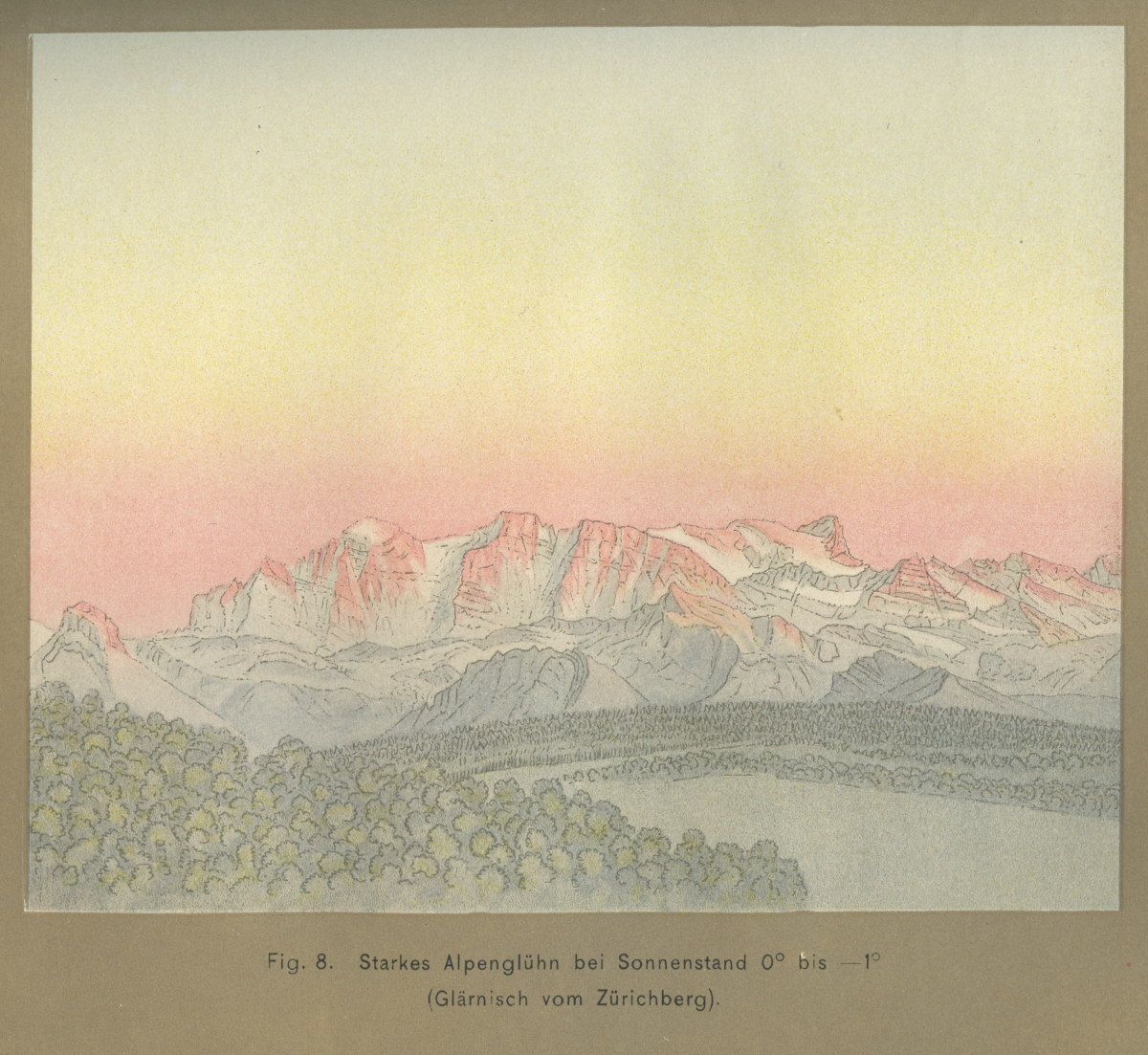 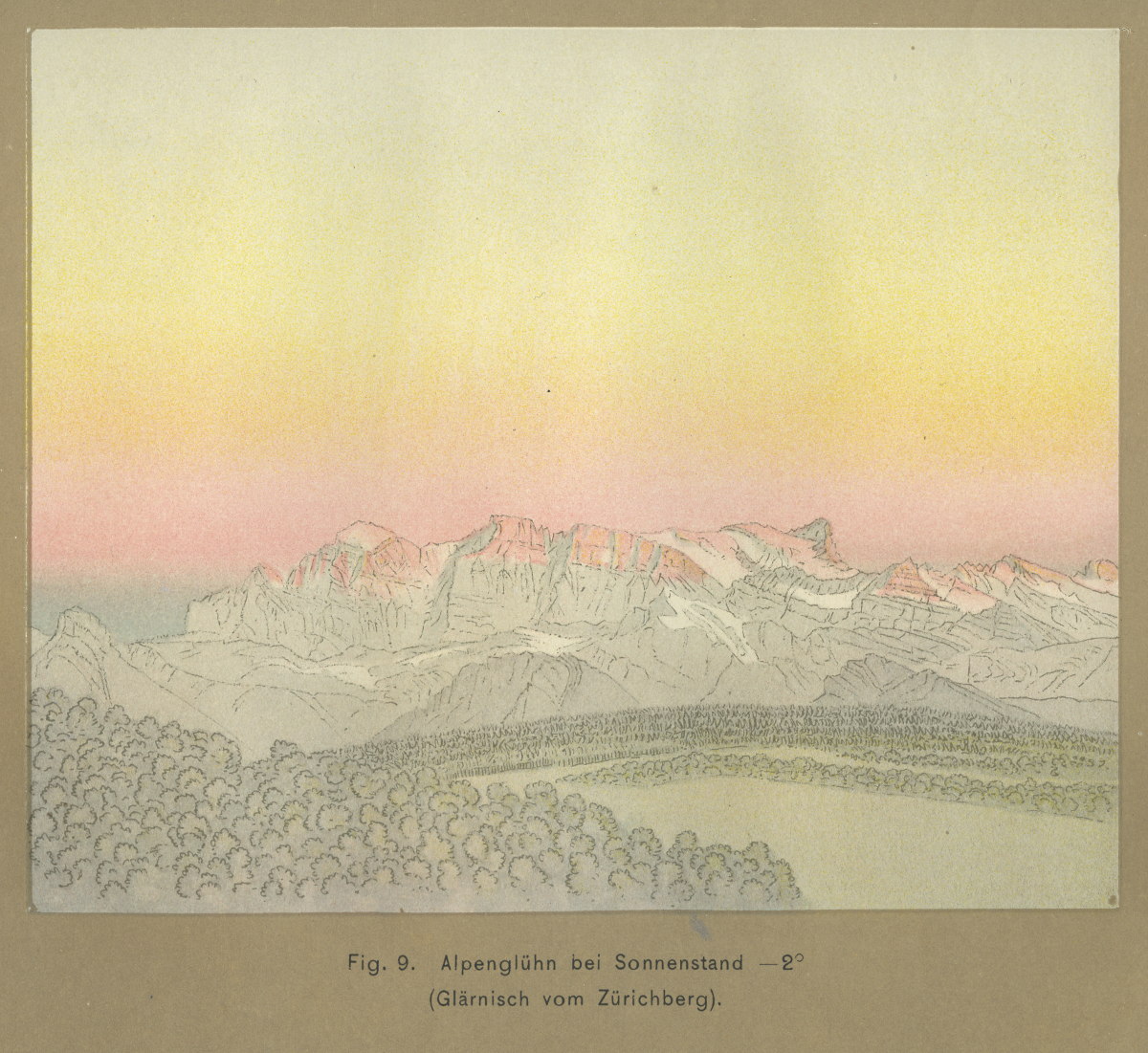 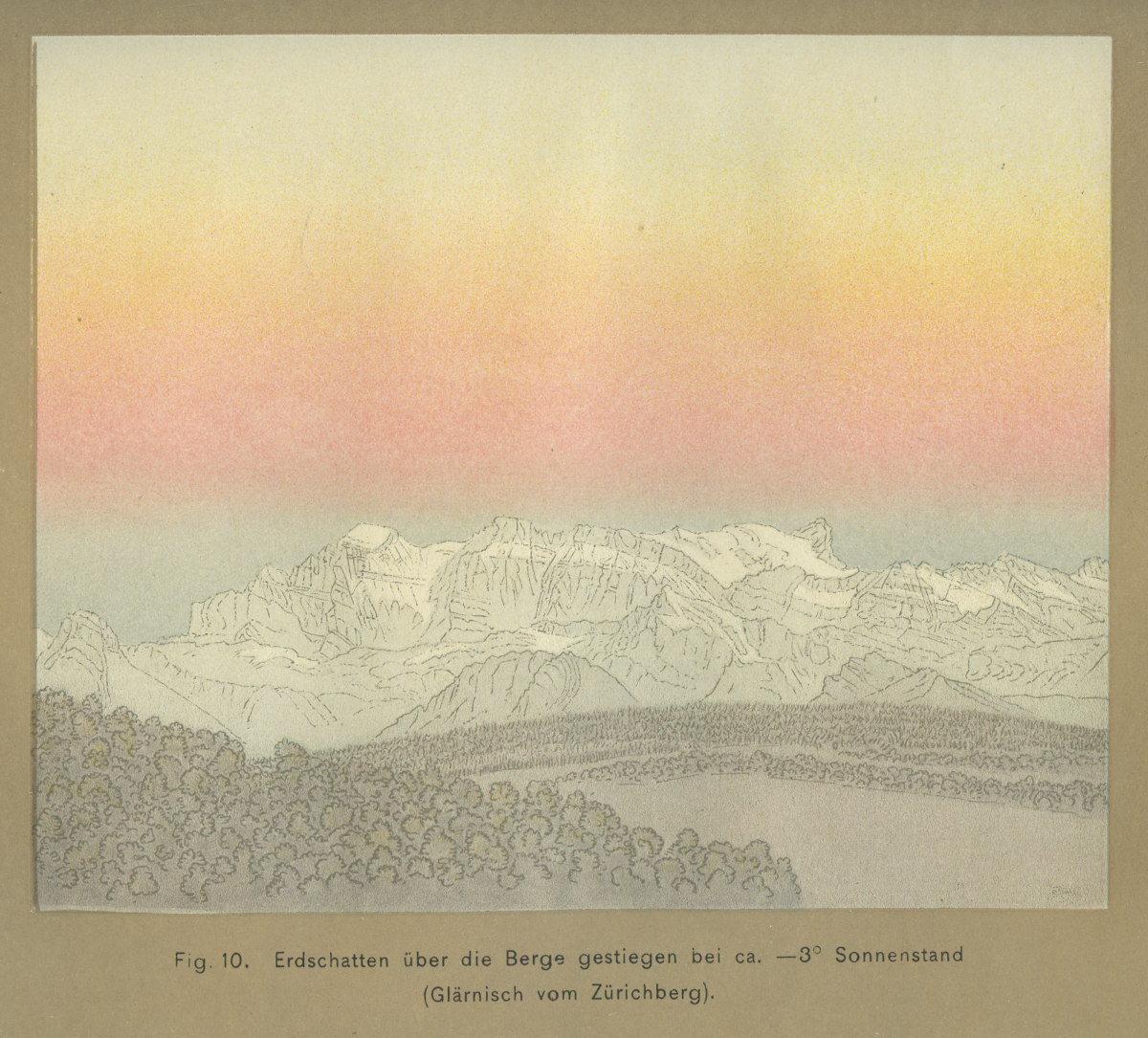 earth’s shadow has risen above the mountains when sun is at position -3 degrees appr. 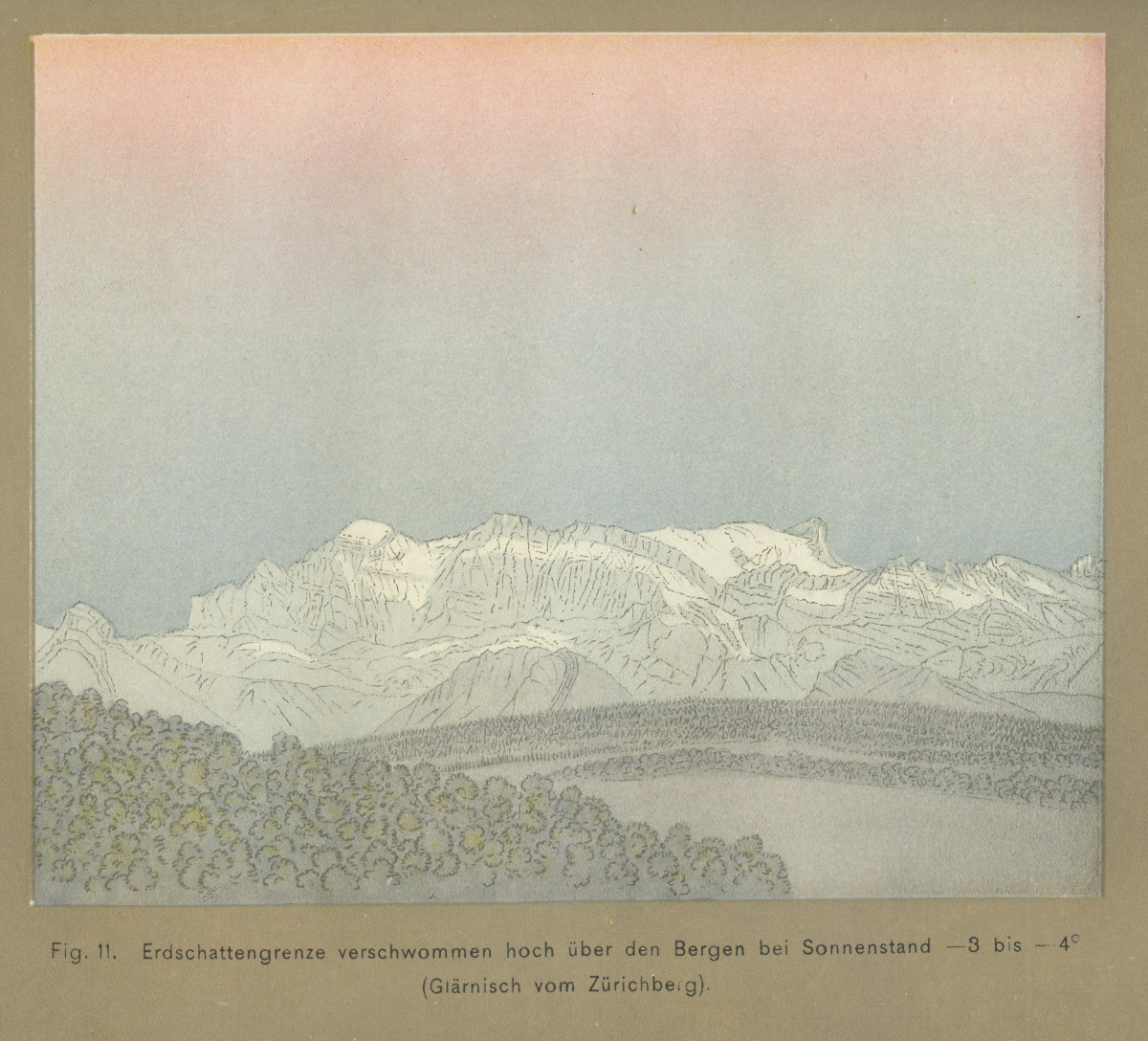 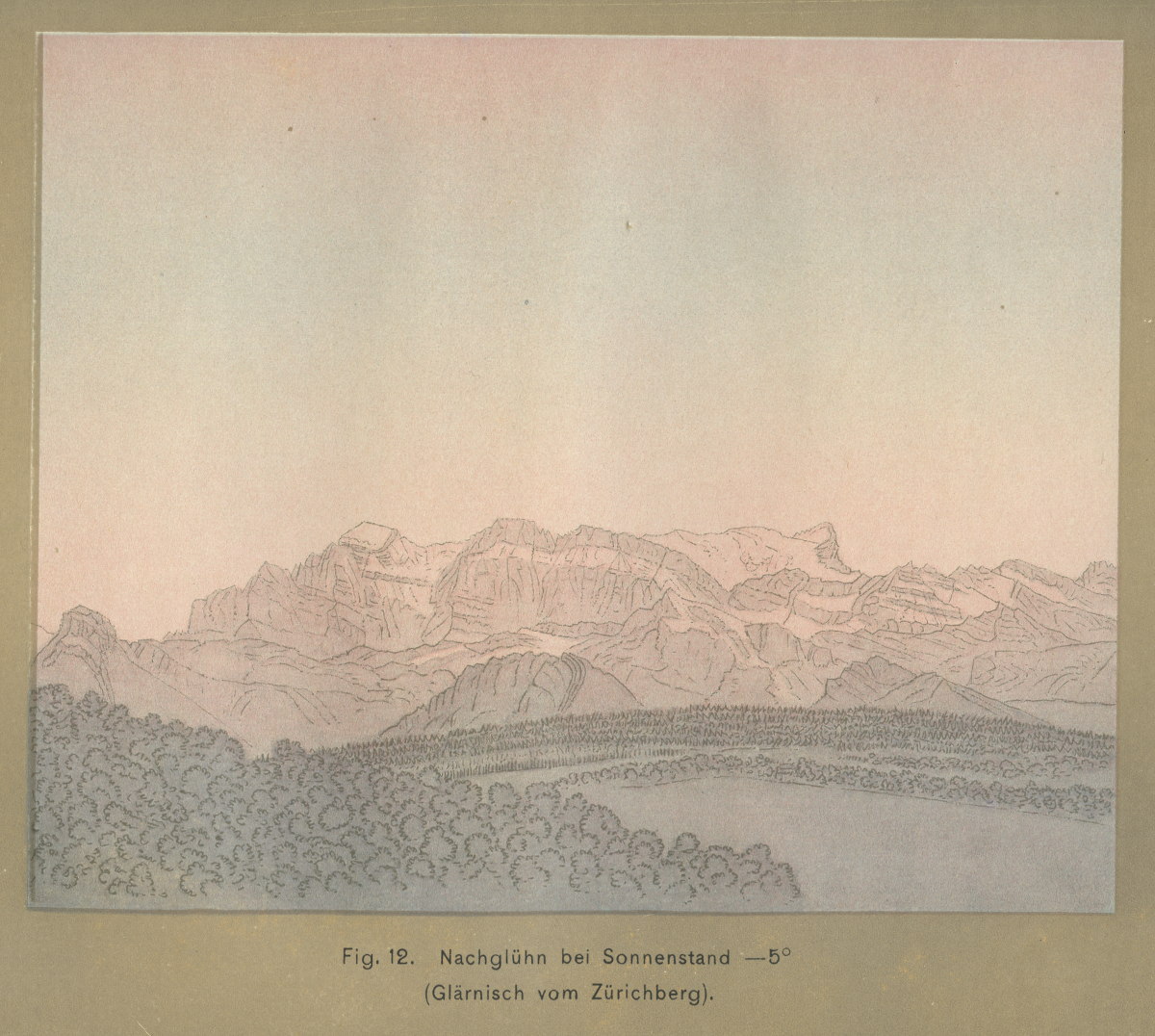 afterglow when sun is at -5 degrees (Glaernisch seen from Zuerichberg) 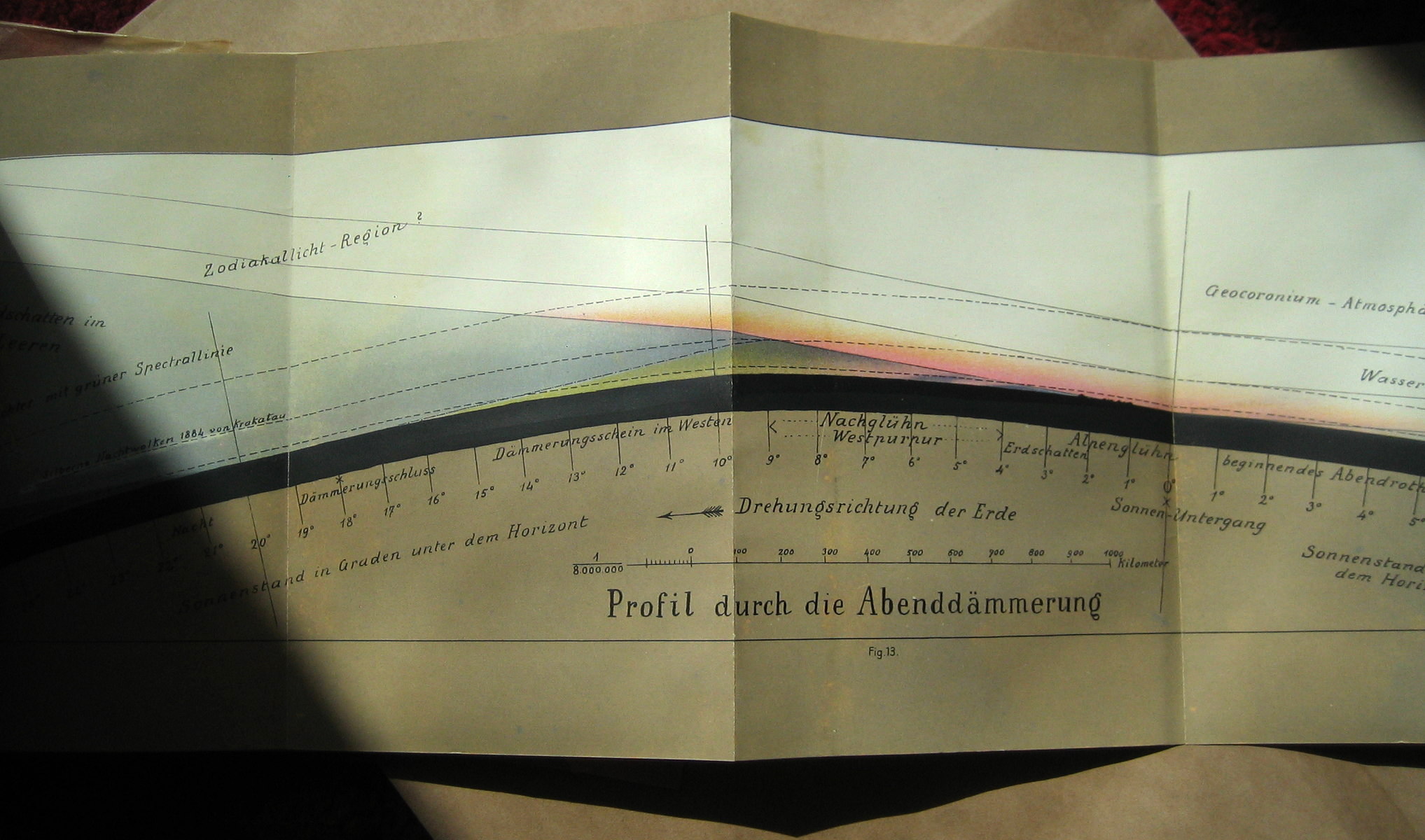 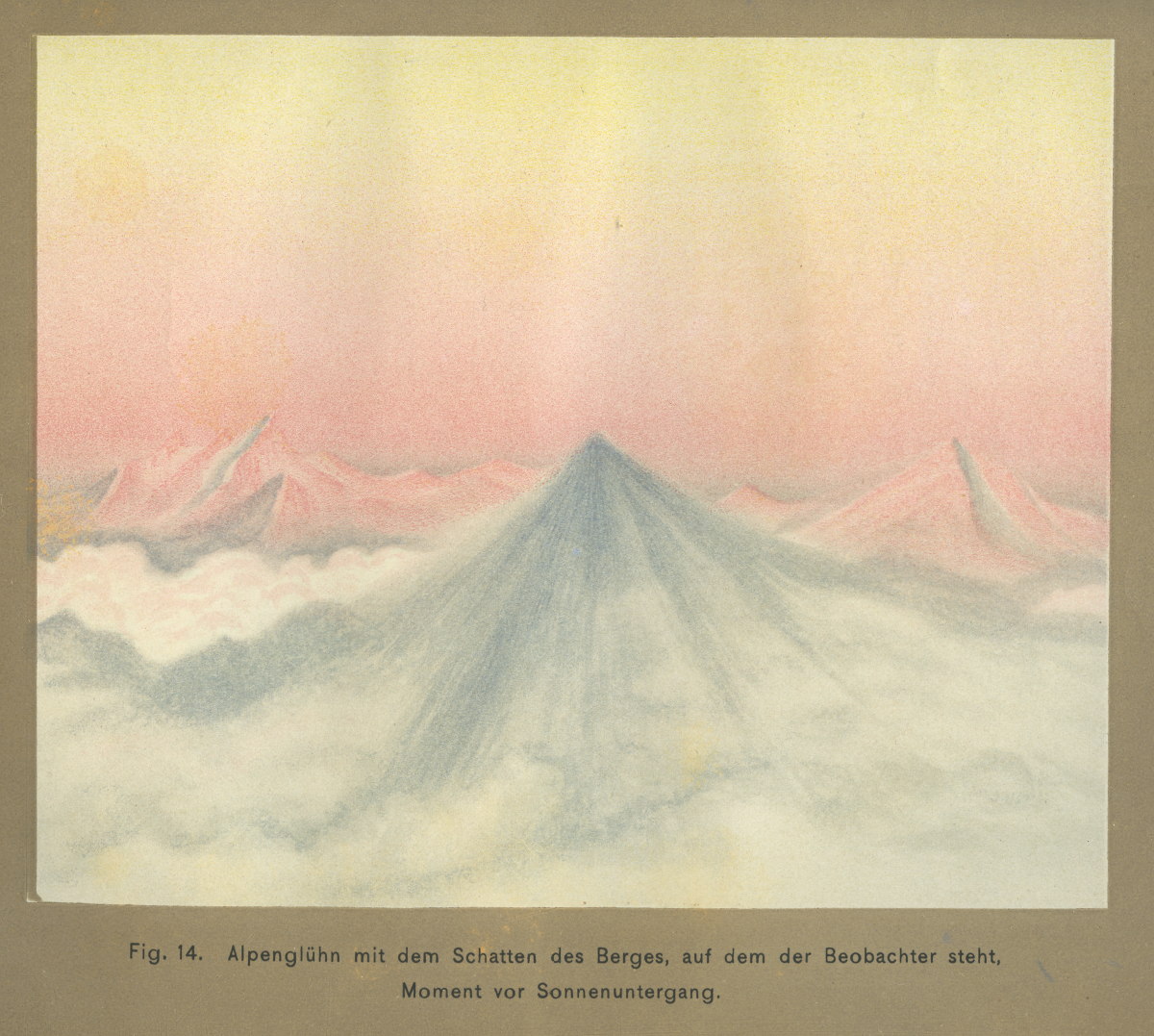 Alpine glow with shadow of the mountain on which the observer is standing, just before sunset 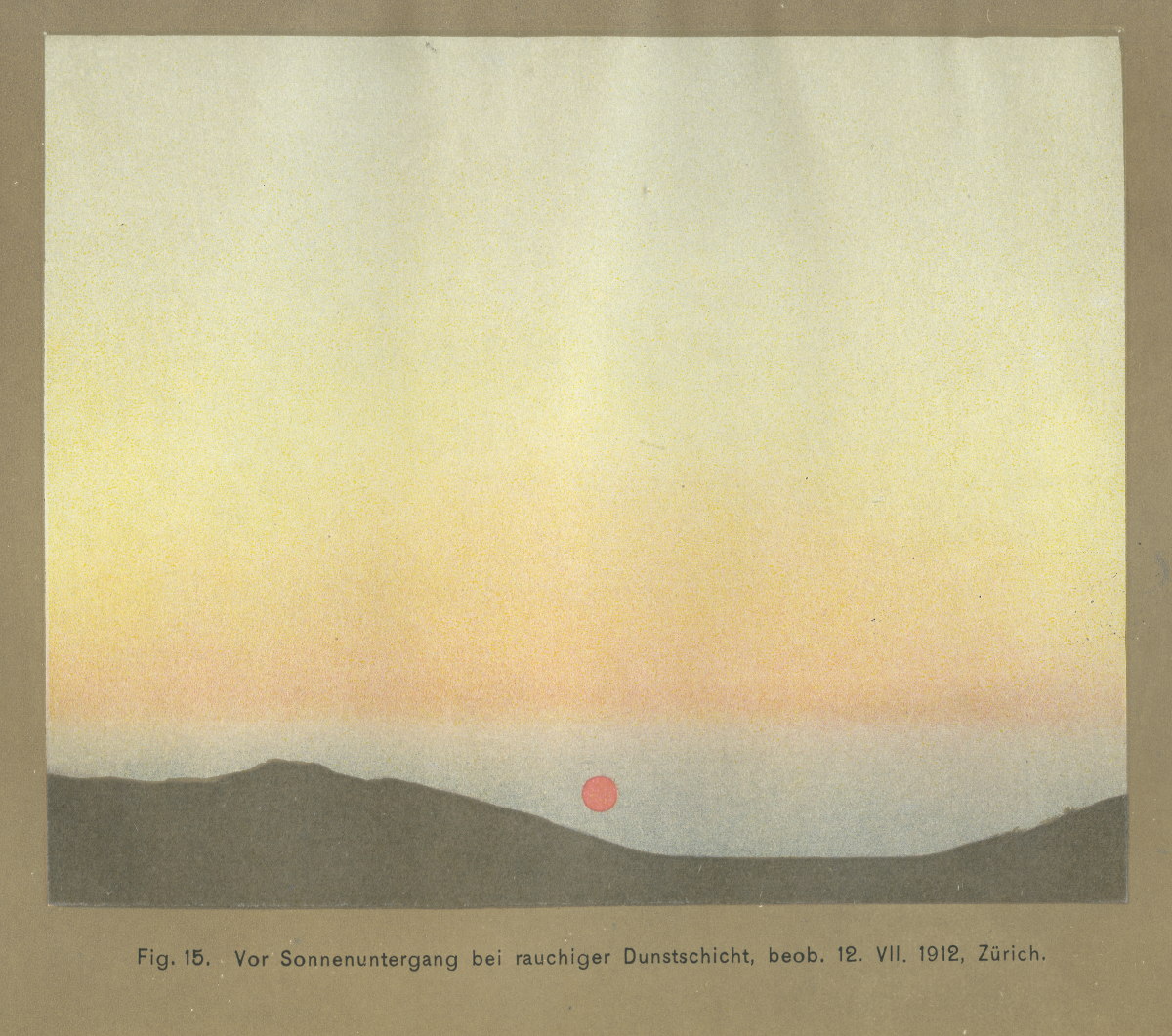 before sunset with a layer of dust and smoke, seen on the 12th of July 1912, Zuerich. 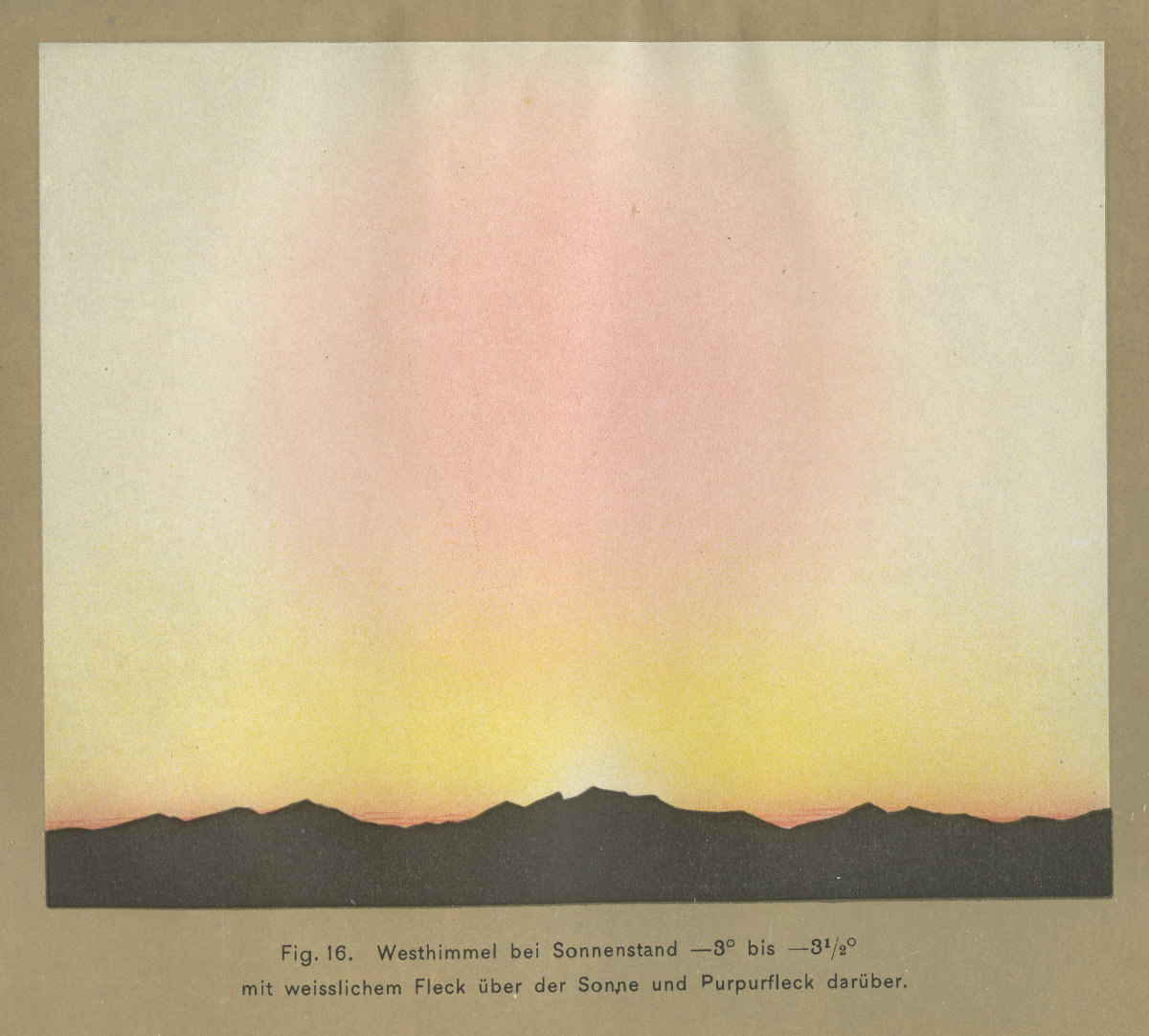 western sky at sun position -3 until -3.5 degrees, with whitish spot above the sun and purple spot above that 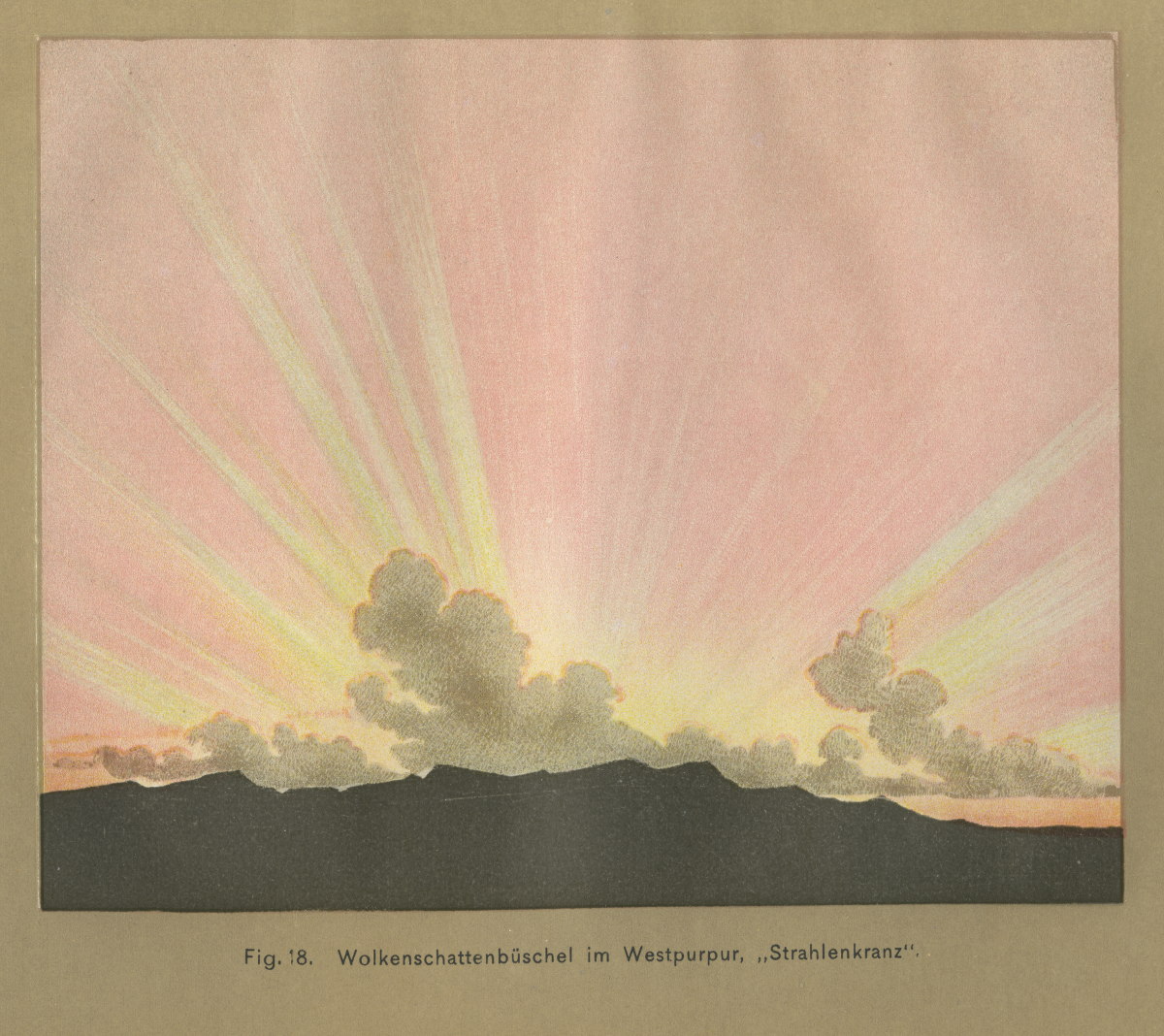 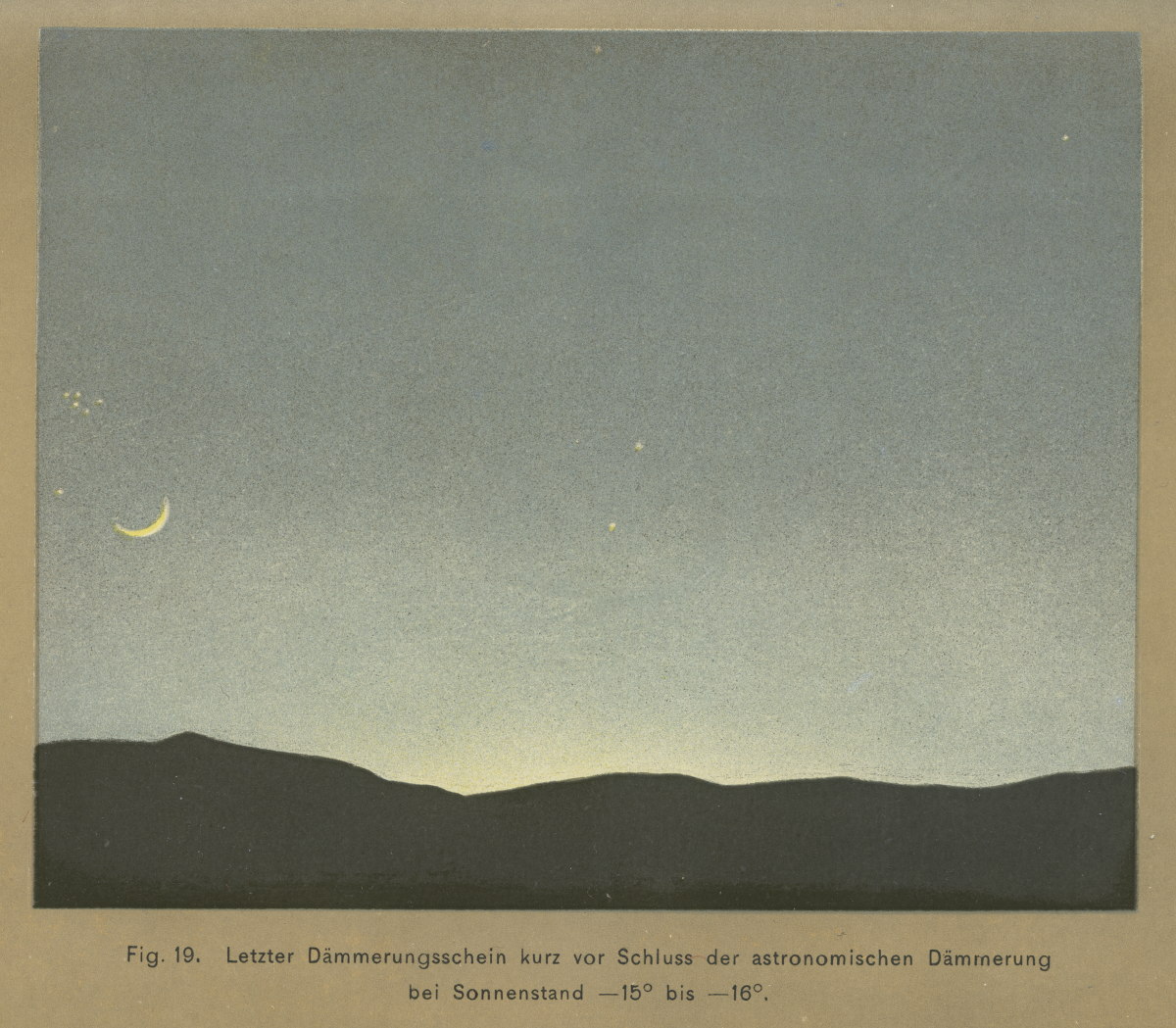 final light of dusk, just before the end of astronomical dusk, at sun position -15 to -16 degrees. 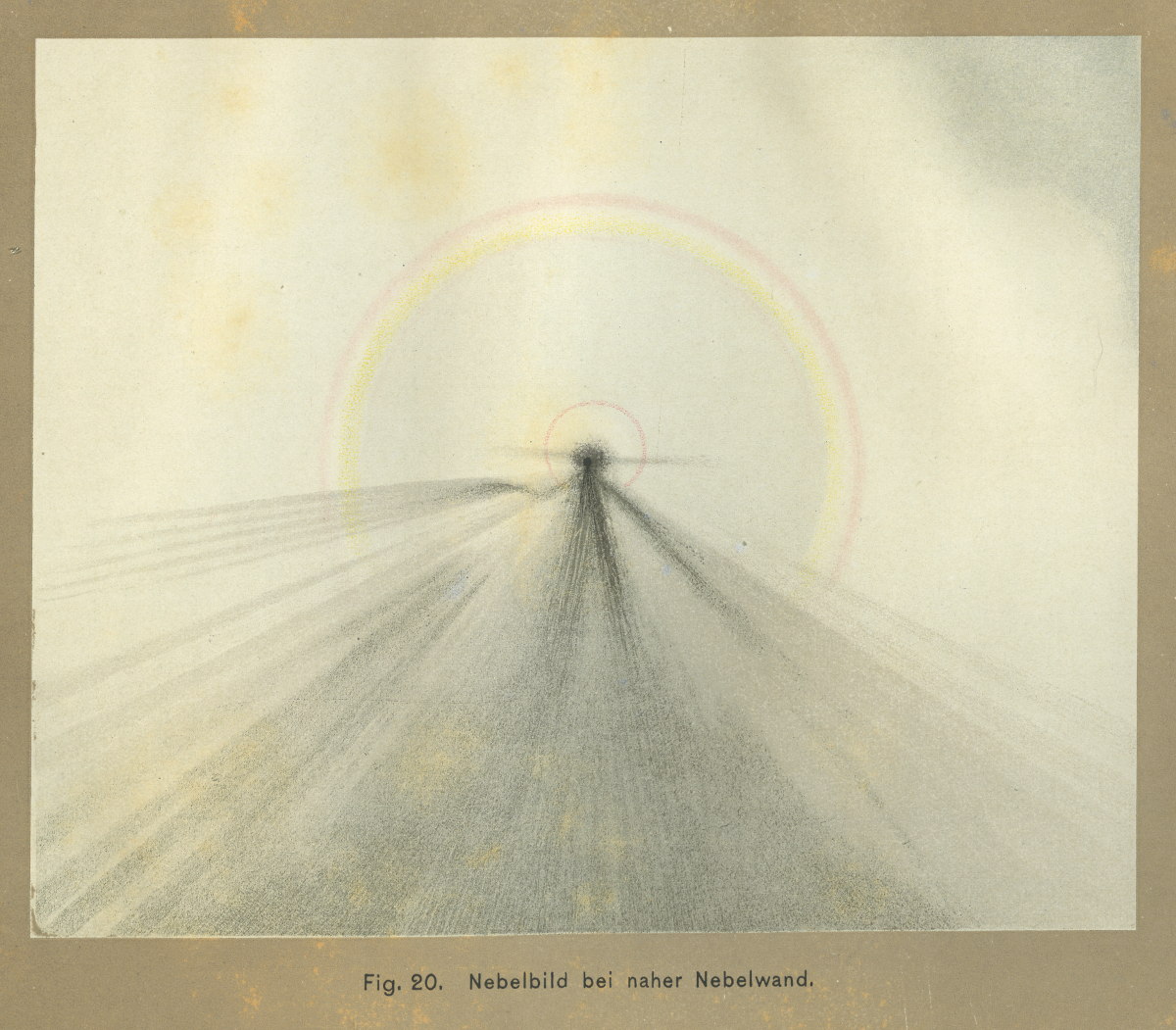 fog image when edge of fog is near